Forty years ago, a tennis match dubbed the "Battle of the Sexes" changed history forever. Billie Jean King, the 29-year old star in the burgeoning sport of women's tennis, defeated 55-year old Bobby Riggs, the 1939 Wimbledon champion and a top-ranked player through the late 1940s. In the four decades since that event - which took place on September 20, 1973 - women have made substantial strides toward equality in sports as well as society at large. King, who was seen as playing for the honor of all women that day, became a pioneer, not only by swinging a racket, but also by speaking out - at considerable risk to her career - for women's equality and later gay rights. 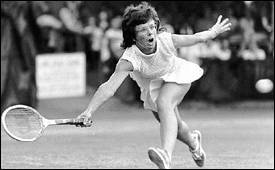 This week I asked the women students in my class if they had played sports in high school or college. Almost all of them had participated in at least one woman's sport, but few of them had heard of King.

Perhaps it is a sign of progress that today they take for granted what King had to fight for. But I also think that it is important to celebrate the heroines and heroes who opened doors in the past, so that today's young people know that they stand on others' shoulders, and so they will have the courage and confidence to open new doors in the future.

Fortunately, this week PBS' "American Masters" series is broadcasting an inspiring documentary about King. (She is the first athlete to be featured in this wonderful series). The film reminds us that like Jackie Robinson and Muhammad Ali, King broke barriers in sports and then used her celebrity to break barriers in society.

The documentary puts the "Battle of the Sexes" in its proper context as a publicity stunt that became a political milestone. After months of advance hoopla, King entered the Houston Astrodome like Cleopatra, carried aloft in a chair held by four bare-chested musclemen dressed like ancient slaves. Riggs then entered in a rickshaw drawn by scantily clad women. Riggs gave King a giant lollypop; she handed Riggs a piglet, a symbol of male chauvinism. By the end of the day, King had defeated Riggs in three straight sets, 6-4, 6-3, 6-3.

It was, and still is, the most famous match in tennis history. It had enormous symbolic value, coming during the early years of the new women's movement. It was viewed by an estimated 50 million people around the world, and 30,000 attended at the Astrodome. As the PBS documentary reveals, the match was like a Rorschach test about women's rights. The overt sexism of Riggs, many journalists, and other commentators might be shocking to anyone under 30, but it was a reflection of the times. But for many young women at the time -- including Hillary Rodham (Clinton), who is interviewed for the film -- King was a standard-bearer for the aspirations of their generation.

King's solid victory significantly boosted the credibility of women's participation in major sports. Aided by Title IX, the federal anti-discrimination provision in the Education Amendments of 1972, and by the activism of King and other women athletes, the number of girls and women involved in both amateur and professional sports has grown dramatically.

King is one of the greatest tennis players of all time, and her advocacy for women's sports in the 1960s and 1970s revolutionized school, amateur, and professional athletics. There had been many great women athletes before King, but she helped make it more acceptable for girls and women to be athletes. In 1975 Seventeen magazine polled its readers and found that King was the most admired woman in the world. Later in her life, after she retired from competitive play, King also became an iconic figure in the lesbian and gay community.

Born in Long Beach, Calif. in 1943, Billie Jean Moffitt's father was a fireman and her mother a homemaker. (Her brother, Randy Moffitt, had a successful career in baseball as a major-league pitcher). Billie Jean was already an accomplished softball shortstop and enjoyed playing football when her parents decided that she should pursue a more "ladylike" sport. Her father suggested tennis. She picked up a racket at age twelve, played on public courts (at a time when most first-rank tennis players learned the sport at private country clubs for the affluent), and was soon identified as a tennis prodigy.

Unlike today's promising young athletes, King did not have an elaborate network of coaches and clinics to nurture her talent. At fifteen, she made her debut at the U.S. Championships. In 1961, at seventeen, she and Karen Hantze won the women's doubles championship at Wimbledon. In 1966 King won her first Wimbledon singles title and was ranked number one.

In 1974 King co-founded World Team Tennis and served as the player-coach of the Philadelphia Freedoms, becoming one of the first women to coach professional male athletes. She coached the US Olympic women's tennis team in 1996 and 2000.

In the late 1960s professional women's tennis was widely dismissed as a frilly sideshow. Male "amateur" tennis stars would get paid under the table, but women athletes were not taken as seriously. For winning her first two Wimbledon tournaments, she received nothing except the $14 daily allowance.

In 1970, when King and eight other female players defied the tennis establishment to form their own professional circuit, many experts doubted that they could attract big enough crowds to generate prize money. Women's tennis is now as popular as men's.

In addition to her dominance on the courts, King made significant contributions to women's sports and feminism in general. In 1972 she signed a controversial statement, published in Ms. magazine, that she had had an abortion, putting her on the front lines of the battle for reproductive rights. Also in 1972, she became the first woman to be named Sports Illustrated's "Sportsperson of the Year."

King pushed for higher fees for women athletes, which led firms like Philip Morris and Virginia Slims to sponsor women's tournaments. When she won the U.S. Open in 1972, she received $15,000 less than did the men's winner, Ilie Nastase. She threatened to boycott the 1973 U.S. Open if it did not equalize prize money between women and men athletes. The tournament agreed to do so, setting a precedent.

In 1974 she was one of the founders and the first president of the Women's Tennis Association. That year, with support from Gloria Steinem and Ms., King also founded womenSports magazine and the Women's Sports Foundation. With King's backing, the magazine and foundation became powerful voices for women in sports.

The foundation has helped women athletes obtain college scholarships, and it began its own grants programs to support summer camps and fund traveling and training scholarships for promising young female athletes. The foundation has played an important role in using Title IX to push for greater equality in athletic opportunities for men and women. Although women athletes still get fewer teams, fewer scholarships, and lower budgets than their male counterparts, since Title IX's passage, female athletic participation increased by 560% at the college level and 990% in high schools, demonstrating that it was lack of opportunity - not lack of interest - that kept females out of high school and college athletics for so many years.

This progress is the result of persistent pressure by advocates. The foundation has filed friend of the court briefs in support of women high school students seeking equity with male sports programs. In one case, resolved before reaching the courts, the foundation supported a teenage girl who wanted to try out for the men's high school baseball team instead of being restricted to softball. The foundation also advocates for greater sports participation by women of color and by those with disabilities.

King was a pathbreaker in many ways. By 1968 King realized she was attracted to women but could not bring herself to admit it to her husband or her parents. "The whole world was in tumult, and so was I," she said. "I was so ashamed."

"I couldn't get a closet deep enough. I've got a homophobic family, a tour that will die if I come out, the world is homophobic and, yeah, I was homophobic," King told a Sunday Times of London interviewer in December 2007.

In 1981 King was forced out of the closet by a former girlfriend who sued her, unsuccessfully, for palimony, while she was still married. She soon embraced her new role as the first openly lesbian major sports star. (She divorced her husband, Larry, in 1987.)

Elton John wrote "Philadelphia Freedom" to honor King and her World Team Tennis franchise. She serves on the Elton John AIDS Foundation and has received numerous honors for her work with the gay, lesbian, bisexual, and transgender (LGBT) community. King's foundation developed and promotes It Takes a Team!, an educational program to end homophobia in school sports.

Writing in Sports Illustrated in 1975, sports commentator Frank Deford observed, "[King] has prominently affected the way 50 percent of society thinks and feels about itself in the vast area of physical exercise. Moreover, like [what Arnold] Palmer [did for golf], she has made a whole sports boom because of the singular force of her presence."

Among her many honors, King was awarded the Presidential Medal of Freedom in 2009. The U.S. Tennis Association has named its main facility in New York City the Billie Jean King National Tennis Center.

All Americans who care about equality stand on Billie Jean King's remarkable shoulders.

Peter Dreier teaches politics and chairs the Urban & Environmental Policy Department at Occidental College. His latest book, The 100 Greatest Americans of the 20th Century: A Social Justice Hall of Fame, was published last year by Nation Books. Billie Jean King is one of the people profiled in the book.

This article draws on a previous article published on The Huffington Post on June 24, 2012.