The great American journalist and diplomat Edward R. Murrow once observed: "When the loyal opposition dies, I think the soul of America dies with it."

That is a powerful idea to remember, especially in the context of dissent. As Assistant Secretary of State for Economic and Business Affairs, I am proud to be part of a government agency that has incorporated constructive dissent as a core value in the formulation of our policy and program management.

I am also proud to be a member of a family that institutionalized an award for dissent.

The William R. Rivkin Award, created in 1968 and named for my late father, honors a mid-level career officer who uses intellectual courage and constructive dissent to achieve positive progress. The State Department is the only part of the U.S. government to honor dissent in this way.

On June 23, my brother Robert Rivkin presented this year's award to Jefferson Smith, the Management Counselor at U.S. Embassy Kuwait. 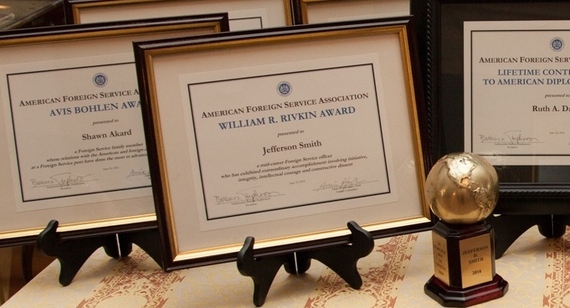 While posted to Kuwait, Smith observed that the locally hired staffers in nine embassies and consulates in the Persian Gulf region were unable to support their families based on the salaries and benefits afforded them by local labor practices.

The cable, signed by the six regional ambassadors, was successful in securing increased salaries for the staffers. It also served as a model for Smith and others to continue in the same vein: advocating more equitable compensation on behalf of locally employed employees in similar circumstances.

There are many inspiring stories like this. But one particularly resonated with me last month when President Obama became the first sitting American president to visit the peace park at Hiroshima.

It brought to mind a previous Rivkin Award recipient who would greet this visit with no small measure of pride and satisfaction.

Joel Ehrendreich is now the U.S. Consul General in Naha, Japan. But more than a decade ago, as a mid-level political officer, at the U.S. embassy in Tokyo, he wrote a "dissent cable" upon learning that no U.S. representative had attended Hiroshima's annual commemoration during the previous 59 years.

Attending the Hiroshima Peace Ceremony, he argued, would help deepen our bilateral ties, and achieve closure and reconciliation on what has been a longstanding and emotional issue for many Japanese citizens.

Ehrendreich's efforts were initially unsuccessful but he continued to advocate for change to this policy. Support for his proposal grew steadily. On August 6, 2010, the 65th anniversary of the bombing of Hiroshima, U.S. Ambassador John V. Roos attended the ceremony.

Ambassador Roos's attendance, and subsequent attendance by Ambassador Caroline Kennedy, was welcomed by the Japanese people and the international community. It deepened our relations with Japan at a critical time and opened the door for many other nations to follow our lead.

Ehrendreich told me later: "Dissenting was the right thing to do."

The State Department's tradition of encouraging dissent recently made headlines when the New York Times reported that a group of mid-level officers had written a dissent criticizing aspects of current U.S. policy toward the crisis in Syria.

Without commenting on the specific merits of this matter, I was very proud of Secretary Kerry's reaction: to sit down with the dissenters and give them a careful hearing regarding their ideas and concerns.

Foreign Service Officers stationed around the world are given the opportunity to question complex issues, and it has led to stronger foreign policy. Whether it affects high-level decision making - like a Presidential visit - or matters that never rise to that level, the Department's culture of independent thought has served us well.