On the border of Georgia and Alabama, a strange thing took place on the 150th Anniversary of Abraham Lincoln's assassination. Members of the local college and community gathered at the base of the flag pole, not to cheer President Lincoln's death, but to celebrate his life, and the key contributions he made to this nation. 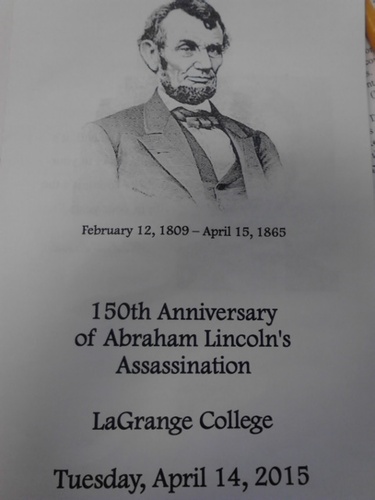 An assassin's bullet felled President Abraham Lincoln at Ford's Theater on April 14, 1865. He died the next morning. At the time of his death, he was mourned in both the North and by most of the South. In the History Channel documentary on the subject, Lincoln's assassin John Wilkes Booth, while on the run, finally gets to see how the nation reacted to his so-called "moment of heroism." Instead, he found even the South hated his cowardly act. Not only had he shot the president in the back of the head, but killed a man dedicated to a peaceful, rather vengeful, reunification. It may have contributed to Booth's subsequent suicidal action, knowing that no one would mourn him as a savior or even a martyr.

But on the 100th anniversary of the Civil War, the "Lost Cause" movement was in high gear, claiming that the South was one which should have really won. The war was about their "noble" stand on states' rights, instead of the reality that slavery was the real cause, and the special right slave-owner politicians were seeking. It became a symbol to resist desegregation, and keep the racial system unequal in the South. The Civil War became "The War of Northern Aggression" or even "Mr. Lincoln's War," as Pat Buchanan claims.

Some of those sentiments were still present in the South when I moved here in 2001. An Indian man was falsely accused of burning an American flag on 9/11. The Confederate flag debate was just gearing up, used as a symbol to defeat Governor Roy Barnes. Over in Alabama, voters listened to Chief Justice Roy Moore, who campaigned against a referendum that would have eliminated a lot of leftover Jim Crow laws.

Yet here in the Deep South, there's signs that this movement, and attempts to gain political power in government by playing the race card, might be fading. The number of cases of integration and tolerance are making attempts to provide a divisive environment (for political gain) seem abnormal. And it's not so much the hand of government that forces people to do it, but the realization by individuals that racism just doesn't make a lot of sense. 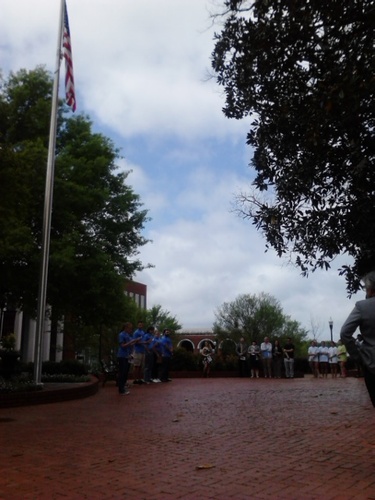 This once sleepy region is becoming a world player, as international businesses like Kia make the town of LaGrange, and surrounding cities their site for production facilities, and most locals welcome them into their neighborhoods and churches. Just last weekend, my son attended a Hindu Thread Cutting Ceremony for his classmate, where more than 100 people, including prominent members of the community, white and non-white, came out for the celebration. 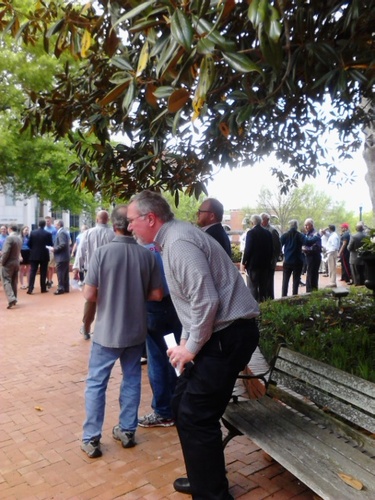 And there we were on April 14, 2015, at the base of the campus flag pole, proudly flying the Stars and Stripes, while students (liberal and conservative) read the Gettysburg Address, Lincoln's Second Inaugural Address (noting prominently the role God played in the president's thoughts), accounts of the Lincoln's death, concluding with the singing of "Amazing Grace". The event was attended not just by the college administration, faculty, staff and students, but also prominent government officials and community leaders.

President Lincoln may have died before he could have brought the North and South together, but 150 years after his death, his spirit still lives on, even in places you once couldn't imagine it would.