Whether you represent an organization with strong support and national reach like the ASPCA, or are simply in a position to make a difference locally, every effort has a life-saving impact.

Last week, we recognized some of the most remarkable people and animals on the front lines of that effort by bestowing our annual ASPCA Humane Awards. The recipients we honored include incredibly resilient dogs and cats, organizations tackling animal cruelty and transforming communities, a congressional leader who championed compassion like no other, and a child who gave her most valuable gift to animals in need.

Collectively, they open our eyes to not only to the challenges of protecting animals from cruelty, but also, our ability and duty to better their lives, and -- as a result -- improve our own. I hope these stories are shared and appreciated so that such laudable behavior will one day shift from remarkable acts by dedicated individuals to social norms of our entire culture.

To that end, I share these stories with you now. 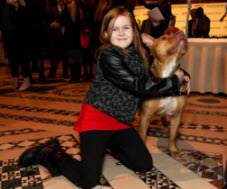 Alabama native Annika Glover, 11, had been battling a cancerous brain tumor for nearly four years. But when she became a participant in the Make-A-Wish program, she put the needs of vulnerable animals ahead of her own. Annika used her one wish to save shelter animals. This wish was granted by the Alabama chapter of Make-A-Wish, which donated $7,000 in Annika's name to the Pets Are Worth Saving (P.A.W.S.) rescue group in Florence, Alabama. With her cancer now in remission, Annika spends much time volunteering at shelter events.

When Congressman Jim Moran announced that he would retire at the end of his term in 2014, it became clear that animals would lose a longtime ally in Congress. Moran's unwavering dedication to ending animal cruelty gave a compassionate voice to the voiceless in the halls of Congress. The twelve-term Congressman from Northern Virginia has been one of Capitol Hill's strongest champions for animal welfare, advocating for causes including ending horse slaughter, cracking down on abusive animal fighting, and introducing a bill to phase out animal testing for cosmetics in the United States.

As co-chair of the bipartisan Congressional Animal Protection Caucus, Rep. Moran worked with legislators on both sides of the aisle to create humane, common-sense legislation, ensuring a strong legacy of accomplishments and advocacy that will no doubt inspire other leaders.

Cat of the Year, Studley

Studley the cat was found abandoned and starved along the side of the road in Washington state in 2006. After making a full recovery, Studley became a therapy cat -- giving love and comfort to people in need. The only therapy cat in the program out of more than 30 animals in the Providence Animal-Assisted Activities and Therapy program, Studley has been a regular visitor to the Providence St. Peter Hospital in Olympia, Washington, where's he's offered comfort to patients of all ages since 2007. 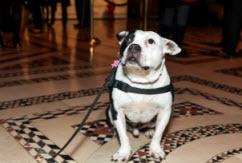 Dog of the Year, Jonny Justice

Jonny Justice was one of 49 dogs rescued from unimaginable cruelty as part of the 2007 Bad Newz Kennels dog fighting investigation, resulting in the conviction of NFL quarterback Michael Vick and others.

The ASPCA assisted in the recovery and analysis of forensic evidence from Vick's property, which helped convict him of operating a competitive dog fighting ring, a federal offense that led to prison terms for Vick and three co-defendants. We conducted medical and behavioral evaluations on the rescued dogs, and placed the 48 who were behaviorally fit for rehabilitation with sanctuaries, rescues, foster homes and adopters throughout the country.

The black and white pit bull who previously had few if any positive interactions with people or other dogs, was given a new life when he was adopted by foster parents in San Francisco. In 2008, Jonny found his true calling as a therapy dog with a particular affection for children, participating in programs where children practice their language skills by reading aloud to him. These days he spends much of his time offering love and support to terminally ill children receiving medical treatment, and inspired a line of plush toys in his image.

During her daily commute eighteen years ago to a furniture factory on the edge of Skid Row in Los Angeles, Lori Weise routinely saw stray dogs suffering from terrible abuse and horrific neglect. Inspired to act, Lori and her coworkers created Downtown Dog Rescue, which has evolved into a large volunteer-based animal charity that rescues dogs and assists underserved communities in South East Los Angeles, Watts and Compton. In 2013, Downtown Dog Rescue created the South L.A. Shelter Intervention Program, which provides pet owners resources to keep their pets at home, rather than abandon them or relinquish them to shelters.

In early 2014, the ASPCA initiated a historic and groundbreaking partnership with the NYPD in which the NYPD responds to all animal cruelty complaints city-wide, while the ASPCA provides expanded direct care support for animal cruelty victims. Thanks to the dedication of tens of thousands of NYPD officers -- newly-trained and firmly on the case of animal abuse -- animal cruelty arrests in the first six months of the program increased nearly 160 percent, and the number of animals rescued and treated by the ASPCA increased 180 percent. This past summer, the NYPD formed the department's first Animal Cruelty Investigation Squad, which will solely focus on serving the abused and neglected animals of the city, making New York City one of the safest places in America for animals.