Unless you've been hiding under the pot of gold at the end of the #marriageequality rainbow, you probably know that on June 26, 2015 the Supreme Court ruled that all marriages are legal and considered equal under the 14th amendment- regardless of gender or sexual orientation- in ALL 50 states. This isn't just a victory for the LBGTQ community, but a victory for love!

This may be a progressive move for Americans, but this is nothing new for animals. Did you know that at least 1500 species of animals have been engaging in homosexual activity sans judgment from their peers for eons? Yes, that's right. Homosexual encounters have been documented in a multitude of species ranging from penguins, in matching tuxedos, to giraffes to bonobos to bison! However, there is only one species that propagates widespread discrimination against homosexual individuals of their species and let me tell you- it ain't ferrets. Nope. It's humans. But, lately it seems like our species is catching up with the rest of the animal kingdom and taking notes from our feathered, furry, and scaled animals pals.

So, in honor of the Obergefell vs. Hodges historic ruling, I would like to present 9 animal species that are hopefully celebrating in their own fabulous fashion.

Yes, that mighty king of the jungle aren't afraid to engage in a little spooning, sporking and even forking of the same sex. Male lions have been observed forming all male groups and will engage in homosexual activity. Some male lions will form pair bonds that can last several days, much like a shipboard romance. It has been reported that nearly 8% of observed copulations in male lions are homosexual. But it's not just the king of the jungle that has an affinity for the same sex. Lionesses have been observed engaging in homosexual activity in captivity, with usually the interested female positioning herself under another female to encourage her to mount. The mounting female then performs many of the same mounting behaviors as a male lion would, such as growling, biting the neck, and thrusting her pelvis. These big cats give a whole new meaning to gay 'pride'. Roar! 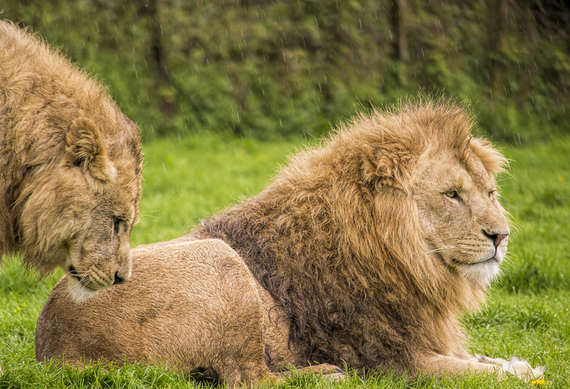 Gerald and Tito are the kings of their gay pride...*

Bonobos, one of our closest genetic relatives, engage in homosexual acts a plenty. And it has been found that females that engage in more frequent acts with members of the same sex are higher on the proverbial social totem pole. Sexual activity of all kinds is often used to diffuse tension in groups and male-male and female-female sexual activity is highly common. Female "g-g" (genito-genital) rubbing is often seen between bonobo 'broads'. 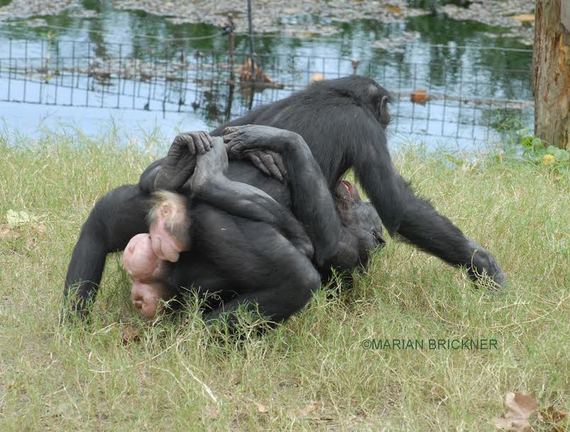 Lucy was a real ladies' lady.*

Penguins, in their adorable matching tuxedos, are notoriously gay. Homosexual pair bonds have been seen in penguins for years. And they seem to be leading the fight in the gay animal adoption movement. Roy and Silo, two male chinstrap penguins that once lived in the Central Park zoo, had a long-term love affair that included an adoption of a chick. The two males remained together for 6 years until Silo's attentions were drawn to a newly introduced female named Scrappy. Roy was left alone but eventually joined a group of male penguins. In Denmark a pair of male king penguins became daddies to an adopted chick after a female had abandoned her egg. 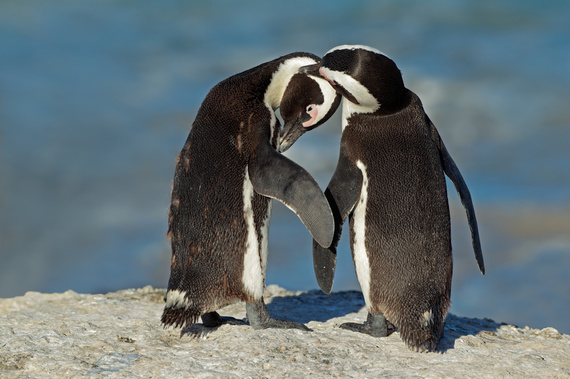 Even the ice caps couldn't chill the heat between these two love birds.

The tallest animals on earth are also some of the gayest. Homosexual encounters between males sometimes made up 94% of observed sexual activity at one study site. Male giraffes are known to engage in 'necking', an activity that oftentimes leads to one male mounting the other. While necking, males will rub one another's necks together and lick the back or sniff the genitals of their would-be part-time lover. The behavior may resemble 'play fighting,' but these encounters are not actually aggressive. During the 'necking' session, males will often become aroused and exhibit an oh-so-sexy curling of their lips to signal their 'receptiveness'. This will sometimes lead to one male mounting the other and can lead to -ahem- completion. In other instances, groups of 4-5 males will neck and mount one another. 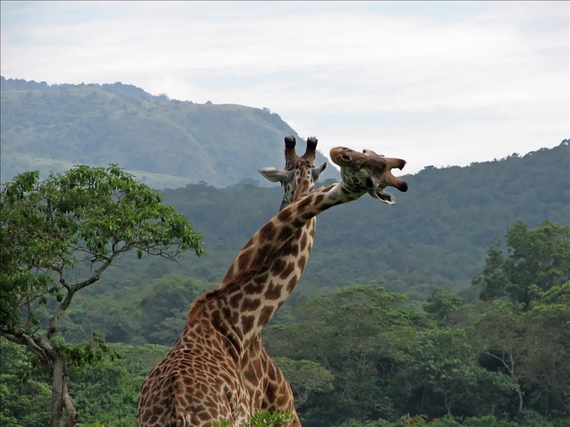 Kenneth and Barnaby were serious about necking.*

These large lumbering beasts that roamed the plains are also known to engage in frequent male-male sexual activity. In fact, male on male mounting is more common than male on female mounting in the rutting season, with homosexual mountings making up 55% in semi wild populations. These bulls literally put the 'bi' in bison! Some researchers say this is because that females only mate with one male once a year. So, these bulls gotta get it where they can. In young bulls, mounting (with penetration) is common and these homosexual copulations last twice as long as heterosexual encounters. Researchers found that nearly two thirds of all male-male mountings observed were a subordinate male mounting a dominant male. Though homosexual mounting drops significantly as male bison get older. (I'm not gonna lie. I've been singing "American Bison" to the tune of "American Women" the whole time I wrote this section.) 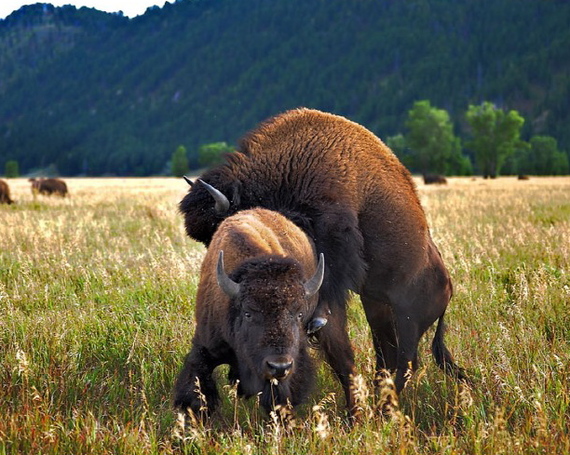 Otto makes love to the camera while Timothy (attempts) to make love to him.*

Sure dolphins were dubbed "gay sharks" on TV's Glee, but what if I told you there are actually gay dolphins! Yes, dolphins are known for going through long periods of strictly homosexual copulations. Males will form pairs, trios, or larger groups and mount one another frequently. Researchers have even described male-male dolphin relationships as 'very intense'. Both male and female dolphins often will fool around with the same sex before going on to mate with those of the opposite sex. 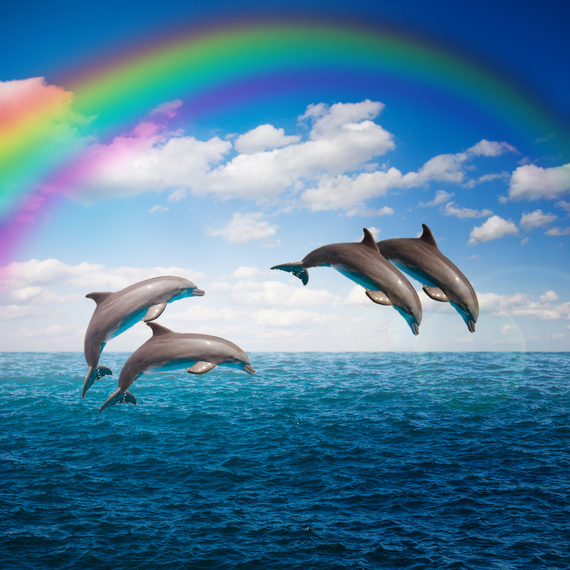 Warthogs don't typically invoke thoughts of long-term lesbian love affairs, but perhaps it's time to reconsider your thoughts about warthogs. Biologists have observed female warthogs forming long-term pair bonds with other females. These females may mount or 'ride' (rest their head on the rear of their partner) the other while they are in heat. Pair bonded females will even raise their offspring together, sometimes even suckling each other's young. And, if one of the females falls sick, the other one picks up the slack and carries out all the parental duties. Biologists have witnessed female couples chasing off males who continually try to interact with them. Male warthogs have also been observed forming pair bonds, but without sexual activity (at least not recorded by researchers). 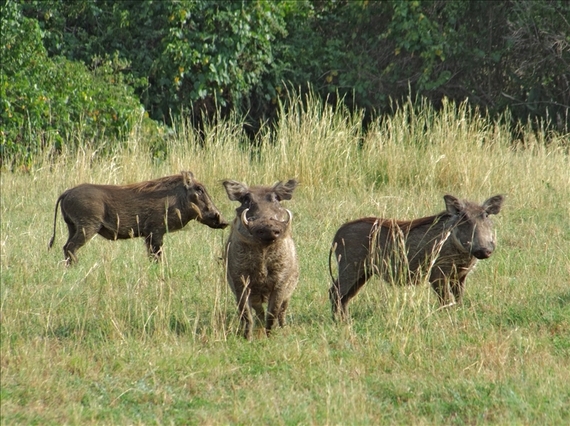 Tina and Ethel's sheer sexual tension was palpable in the hot savanna sun.*

Pachyderm love comes in all shapes, sizes, and sexual orientations. Male on male mounting is common in both African and Asiatic elephants. Males will even show signs of affection, such as rubbing and caressing one another before copulating. Including, touching mouths (like a kiss), placing their trunks in each other's mouths, and intertwining their trunks. Then one male may run his trunk along the backside of the other male as if to say, "You ready to back that trunk up?" And so the mounting begins. The copulations between males last about the same time as copulations with females. Homosexual encounters among female elephants has been observed in captivity in which one female will use its trunk to stimulate another female's clitoris. Oh, and the by the way, the elephant clitoris is a thoroughly impressive 17 inches when fully erect. (You're welcome for that party fact!) 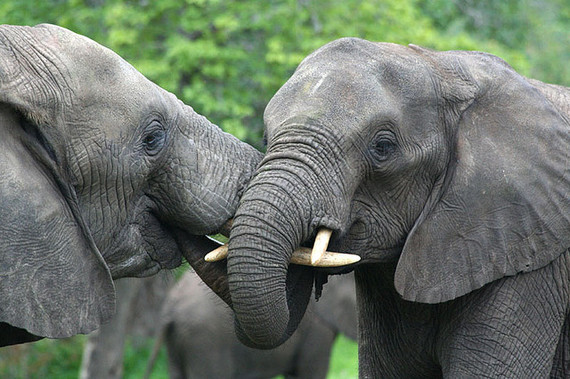 The embers of pachyderm passion smolder as David passionately kisses his beloved Carlos.*

Sure, the clitoris of the elephant sounds impressive. That is, until you hear about the female spotted hyena's lady parts. The female hyena's clitoris is quite long- it is 90% the length of a hyena male's member and with the same diameter (7 inches long with a 1 inch diameter!). Their clitoris can also become erect and -get this- females mate, urinate, and give birth through their clitoris. In fact, approximately 9% of hyena females die during their first labor. Hyenas will mount another female with their erect clitoris. Insertion is not common but they do thrust their pelvis much like a male during copulation. Females will also have meeting ceremonies where they will greet one another and lick one another's clitorides (that plural for clitoris) followed by nuzzling. 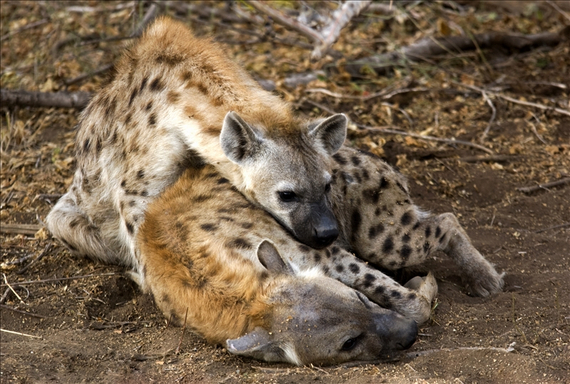 The fabulous thing about sexuality is that it's fluid- it's not fixed or static. Sexuality exists on a spectrum that can change and shift throughout a person's -or animal's- life. Many members of the species discussed above engage in homosexual AND heterosexual activity-they easily fall under the category 'bisexual'. Some of these animals engage in periods of strictly or intermittent homosexual activity early in life and then there is a shift to heterosexual activity. While other animals prefer members of the same or opposite sex as observed in their sexual behavior. Sound familiar? Humans, who are animals first and foremost, are exceptionally flexible and plastic when it comes to our behavior. I hope one day we may be openly fluid with our sexuality without the fear of persecution.

If these 9 animal species can live without discriminating against one another for who they choose to boff, then shouldn't our own species? Marriage equality is an excellent start to a more tolerant world, and I'm thrilled to know that the next generation will never use the term 'gay marriage', because it will just be called 'marriage'.

And, SCOTUS, I want to hug you all. Even those of you who dissented. Why? Because love conquers hate, and there is always a rainbow at the end of the storm. And this ruling is our nation's rainbow.

*Names were changed to protect the identity of the animals. OR the author made them up. You decide.