On Saturday, a rape joke showed up on Hooters' official Facebook page. The restaurant chain said that it was the result of a hack, yet the photo isn't too far off from the kind of pictures the restaurant usually posts.

The 430-location restaurant, more famous for its scantily clad waitresses than for the quality of its hot wings, posted the following photo on Facebook. (We blurred out the women's faces to protect their privacy.) 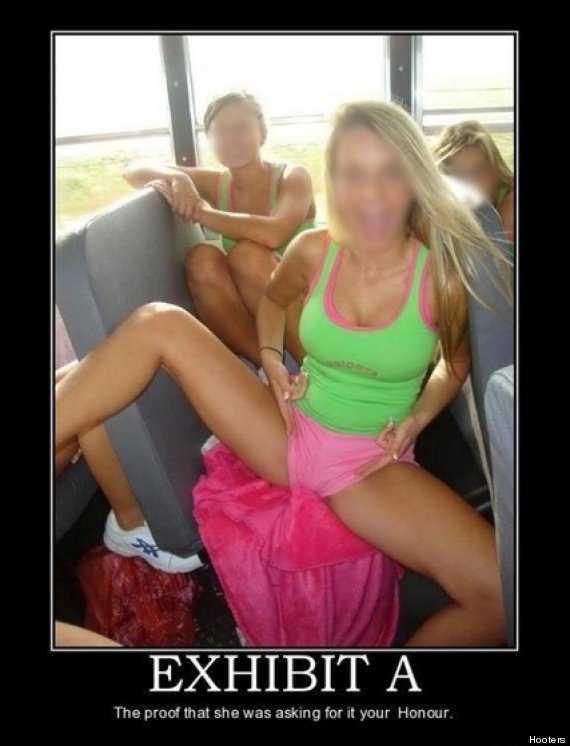 The caption under the photo of the woman in short shorts -- "EXHIBIT A: The proof that she was asking for it your Honour" -- perpetuates the old, misogynistic notion that women invite sexual assault by wearing the "wrong" clothing or acting the "wrong" way, putting the onus on the victim, not the perpetrator, to prevent rape.

About an hour after Elizabeth Plank, an editor at PolicyMic, called the restaurant out for its offensive "joke," Hooters distanced itself from the posting and responded by saying it had lost access to its Facebook page.

Later Saturday evening, the restaurant chain removed the rape joke and announced on Facebook that it has been hacked:

"A number of unauthorized posts were made out of our control," a company spokesperson told The Huffington Post. "Admin access to our account was temporarily taken away and no Hooters personnel were able to administer the site or remove the offensive comments made. Hooters does not support or share the opinions of the content posted from our page Saturday."

Hooters added that company representatives reached out to Facebook right away, but it took five hours for the post to be taken down.

The image in question does appear to be out of line with the rest of what Hooters puts up on Facebook. The restaurant mostly shares professional shots of employees and its food. The photo that the hackers shared took the form of the popular Internet meme of framing and captioning a photo like a motivational poster.

Still, Hooters' Facebook page is far from enlightened in how it depicts women. It frequently posts close-up photos of women's body parts. Is there anything more objectifying than cutting a woman's face out of a photo and showing only her breasts or crotch?

In case anyone was going to argue that they like going to Hooters for its food rather than to ogle its employees, the company sold them out with the following post:

Facebook, as a company, has a shaky history dealing with rape jokes. Last year, a group called Women, Action and the Media (WAM!) and the Everyday Sexism project took Facebook to task for not shutting down sexist pages that condoned violence against women. Facebook responded by saying that it would update its policies regarding offensive content and would take violations more seriously.