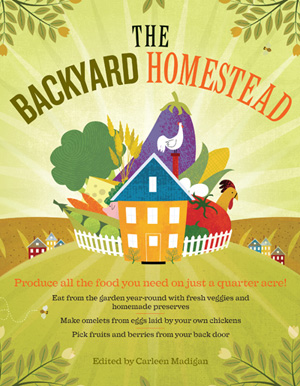 Formerly squeamish suburbanites are learning what every little kid knows instinctively--dirt and worms are cool. If you're on the cutting edge, you've already stopped trimming your lawn and started clipping your nails, 'cause the era of manicured hands and manicured lawns is officially over. It's time to tear up your turf, grow 'clean' food, and get some dirt under your nails, because nothing says "sustainable" like particles of soil clinging to your fingers--or your fingerlings.

Mini farms are sprouting up in front yards, back yards, on rooftops, and sunny windowsills. Early adopters have taken chickens under their wings, and put bins of scrap-happy red wigglers under their kitchen sinks to compost the coffee grounds. Here in uber-urban NYC, my friends are planting illicit patches of herbs on their fire escapes, a practice hypothetically frowned on by the NY fire department. But who's gonna get busted for growing basil? Everybody knows that firefighters cook up a storm when they're not racing off to put out other folks' fires.

Illicit bee-keeping, on the other hand, can be a stickier endeavor, which is why there's a move to make it legal in NYC, where--to the astonishment of many--chicken keeping is actually permitted.

It shouldn't be such a surprise, really, because a half-century ago, "chickens were all the rage in the United States, and not just among farmers," as Nicolette Hahn Niman notes in her memoir Righteous Porkchop: Finding a Life and Good Food Beyond Factory Farms, adding that "these were times when people had limited entertainment options--no movies, no television, and no computers...contact with chickens was about as commonplace as interactions are today with dogs and cats."

Speaking of cats, Catwoman Eartha Kitt kept chickens and grew greens in her Beverly Hills backyard. It's a shame she didn't live long enough to see farming become fashionable; I'm sure Kitt would have pounced on Carleen Madigan's The Backyard Homestead and added it to her Christmas wishlist for Santa, baby.

Madigan's book, aptly billed as "the Indispensible Guide To Food Self-Sufficiency" is an invaluable resource to help you tackle just about any homegrown, made-from-scratch project, from growing your own fruits, veggies and livestock to preserving it in the form of canning, curing, brewing, preserving, etc. Dominique Browning, the former editor of the late, lamented House & Garden (what other shelter magazine would have Bill McKibben contribute a column on composting?) gave it a rave in last Sunday's New York Times Book Review:

Advertisement
This fascinating, friendly book is brimming with ideas, illustrations and enthusiasm. The garden plans are solid, the advice crisp; the diagrams, as on pruning and double digging, are models of decorum. Madigan makes it all look so easy. Halfway through, she puts petal to the metal, and whoosh! At warp speed we're growing our own hops and making our own beer, planting our own wheat fields, keeping chickens (ho hum), ducks, geese and turkeys (now we're talking) and milking goats, butchering lamb (wrapping it with that nifty "drugstore fold" -- diagram included -- while we're at it), raising rabbits and grinding sausage. Oh, and tapping our maple trees, churning butter and making cheese and yogurt...

Madigan's got the goods, and she wants you to have them, too:

It's about loving the process of creating something delicious and the joy of sharing my creations with people I care about.

The Backyard Homestead is for anyone who's tantalized by the prospect of producing even a little bit of your own food, regardless of where you live. So if you've got those back-to-the-land fantasies but your town is more Wal-Mart than Walden Pond, don't despair: The Backyard Homestead will help you make your dreams come true.