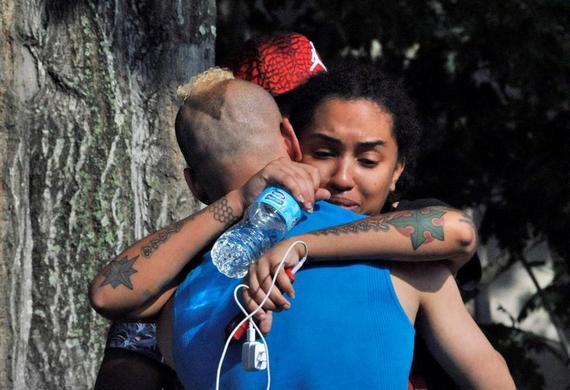 The worst case of gun violence in American history struck Orlando Monday morning. We feel angry and despondent: angry at the targeting of a gay nightclub, making this a hate crime; angry at the commitment to Islamic terrorism motivating the shooter; angry at the ability for such a terrorist to obtain high-powered guns.

How do we deal with anger? One way is to strike out. I would be saddened but not surprised to see people strike out at American Muslims who have no connection at all to the shooter. Another way displace anger is to blame the victim.

We have not seen it yet, but I would not be surprised to see some angry fundamentalists start blaming gay men and women who go to a nightclub. Some might try to blame the FBI or the shooter's family, as if they could have predicted an act of such horror and derangement.

How To Deal With Anger

The right way to deal with anger is not to lash out or blame. It is to look within and without. It is look at ourselves to see what we have done to create a climate in which such an act could take place. And it is to look at our community and see what we can do to protect ourselves and one another. It is to remind ourselves, as the Bible put it long ago, that we are our brother's keeper. Or, as Abraham Joshua Heschel once put it, "Not all our guilty, but all are responsible."

Even as we recognize our responsibility, we may feel despondent at our seeming inability to do anything to prevent such violence. Just under a year ago a man walked into an African-American church in Charleston, South Carolina, and murdered nine people studying the Bible. Have we learned anything?

A Holiday of Hope

As a rabbi, however, I am committed to a tradition and a people that never gives up hope. That hope was born at Mount Sinai, where we received the Torah.

The shooting in Orlando coincided with the Jewish holiday of Shavuot. That holiday commemorates the giving of the Torah at Mount Sinai. The Hebrew word Shavuot means "weeks." But it also means "oaths." At Mount Sinai we took an oath to live by certain values.

Paramount among those values is a love of life, as we toast "l'chayim, to life." As people of faith, let us rededicate ourselves today to doing everything we can to save lives--the lives of those targeted by guns, the lives of those living under the threat of terrorism, and the lives of those who are hatred simply for who they are.