Standing approximately 8 meters tall and spanning 439 kilometers in length, the separation wall, which runs primarily through the West Bank, poses great difficulties for the Palestinian people as it threatens our inherent freedoms; freedom of movement, education, and economic prosperity.

According to the European Commission, "the construction of the separation barrier has impoverished Palestinians at an estimated rate of 2-3% GDP per year, and the recovery of the Palestinian economy will largely depend on whether it can escape its political and financial isolation." With the planned addition of another 212 kilometers to the wall and the ongoing enforcement of severe isolation policies, how will the Palestinian people ever be expected to rise out of poverty? The answer is social entrepreneurship.

Over the past few years, social entrepreneurship has revolutionized the nonprofit sector by incorporating for-profit solutions that aim to create sustainable and scalable change at the systemic level.

Social entrepreneurship has launched a disruptive change-based platform that leverages both public and private resources to establish cost-effective solutions to the world's most pressing social problems. This movement plays a very significant role in the social, political, and economic spheres of many regions throughout the world, focusing on issues such as health, education and poverty. The essential need to find solutions for these very same issues ultimately brought the concept of social entrepreneurship to the Palestinian youth, with the launch of the Hult Prize in the Holy Land.

With growing food insecurity, restricted access to quality healthcare, an unemployment rate over 25%, and an alarmingly high percentage of the population living in severe poverty, who better than the Palestinian youth to tackle this year's Hult Prize challenge of doubling the income of people living in poverty in crowded urban spaces?

From our very first "Hult Prize Palestine" information session in Abu Dis, it was evident that we had triggered a spark. What had started as a brief introductory session quickly turned into a prolonged exchange of actionable ideas among passionate individuals, ready to delve into the world of social enterprise to bring the change they so desperately needed. Rather than leaving societal needs to the government or business sectors who had selective interests in the matter, they were convinced that they were the key to transforming the system in order to achieve a better standard of living.

Like wildfire, word quickly caught on, and soon enough, "Hult Prize Palestine" began to gain momentum. From Birzeit to Nablus to Jerusalem, the excitement among the youth was contagious. This social movement represents hope. Hope for better opportunities, hope for a better life, and most importantly, hope that change was finally coming. And so, while the politicians were busy talking amongst each other, the youth were busy establishing this new-found platform of change. 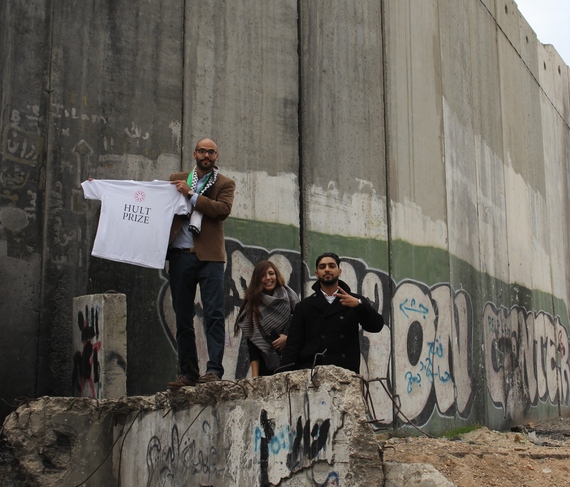 "Hult Prize Palestine" created a medium through which Palestinians from all over the country can come together with the sole focus and purpose of creating lasting solutions for the everyday problems we face.

Sixteen Palestinian teams were chosen to participate in the local finals held in Ramallah. Each of these teams presented unique ideas that sought to create more job opportunities, economic growth, and most importantly, transform the lives of many people. The ideas ranged from beekeeping on urban rooftops to using a combination of hydroponics and vermicomposting to double the production of crops while reducing water usage.

In partnership with the Palestinian American Cultural Center, four of these teams went on to compete in the global regional finals for a chance to win $1,000,000 to fund their startup ideas. While many see the cash sum as the ultimate prize, the real prize was the change based platform that was launched in the heart of Palestine.

Perhaps one of the most distinctive and significant aspects of social entrepreneurship is that it has the ability to break down traditional geographic borders that often constrain many communities. Thanks to globalization and the increased access to information through channels like social media, the potential of the newly-established wave of Palestinian entrepreneurs is no longer defined by their geographic disposition. The Hult Prize helped create a virtual network of entrepreneurs whose connections extended beyond artificial or tangible boundaries. This movement of social entrepreneurship has helped ignite the flame within the Palestinian youth to see the potential within themselves to grow beyond their circumstances - the potential they possess that extends far beyond the concrete wall.

As Palestinians, we are aware of the daily struggles our people face. Half of the battle is working to change our state of mind. While real barriers do exist, our minds are still free. With this freedom we must focus on building a better future by establishing a sustainable environment for social entrepreneurship. Through this movement, we truly can make a difference in our society. So let's leave the talking to the politicians and focus on being active change makers in our society. Only if we are willing to take an active role on this road to change will we truly see the lasting impact we wish to create; it is only then that we will know real freedom.