"My name is Zachary Roberts and on Oct 2nd, 2006 my oldest brother, Charles Roberts, walked into an Amish school house in Pennsylvania where he shot and killed five young schoolgirls and injured five more before taking his own life," said Zachary Roberts in a press release for an upcoming documentary.

Seven years after the tragedy, the Roberts family still seeks a kind of peace, as they deal with the aftermath of Charles Robert's violence in their small, rural community. Faith has anchored all affected by the incident, and the world was amazed by the show of compassion by the Amish community as they took the path of forgiveness rather than anger, with many even coming to Charles' funeral.

Many scars remain, as Zachary asks, "How does the mother of a mass murderer move forward in life?"

Terri Roberts, Charles and Zachary's mother, visits Rosanna, who was paralyzed during the shooting, every week, bathing and talking to her. The surviving girls and their mothers began visiting the Roberts house a mere three months after the shooting, in an incredible demonstration of mercy and love.

Zachary Roberts wants to capture the redeeming power of forgiveness by making a documentary about the shooting and its aftermath, called "Hope - Documentary." Though at first he sought to distance himself from the tragedy as much as possible, he now wants to share the powerful events that have transpired afterwards.

Zachary told The Huffington Post, "I know that for my mother, one of her most important things is forgiveness, and that was the virtue that the Amish expressed when this happened. I believe that was the impetus which set my mother on the path which she is now on. Forgiveness is a very powerful human choice and when exercised it can have the power to alter lives in an extreme way."

The documentary focuses on his mother's journey, as she "picks up the pieces after one of her son's senseless mass murder spree and suicide, and on the very same day as the tragic incident, the Amish community decided to forgive," according to the movie's funding page.

How did Roberts himself get to the point where he was able to tell this personal, heart-wrenching, story? "The inspiration to make this movie was that I knew that at some point, somebody was going to approach my mother with hopes of telling her story. I guess I just felt a tremendous weight that I should be the one to do this. I knew it wasn’t going to be easy, but I thought it would be a really good process for myself and for my family," he said. 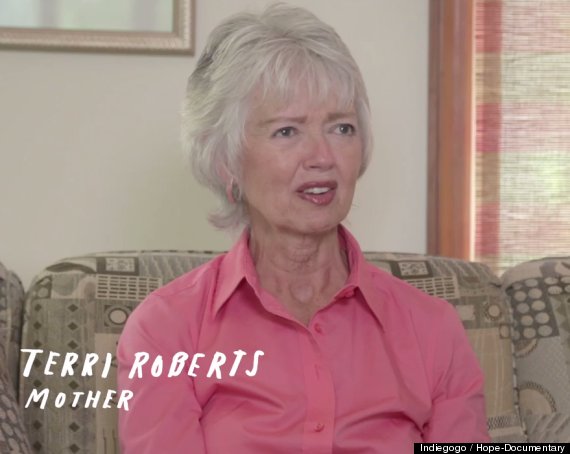 "I first had the idea roughly a year and a half ago, and I guess it came about after the last several years of hearing about the things that were happening in my mother's life. It seemed like her life was transforming in an inspiring way and I saw and heard how her life was impacting others. I just decided that this was something that needed to get out, it needed a bigger audience and film has the ability to reach a large audience."

He explained, "The documentary will focus on on my mother from the time she heard the news about her son all the way up to present day - her story keeps evolving. We will really focus on my mother's feelings upon hearing the devastating news and how she reacted and what she thought - we will really see and understand those raw emotions."

The team has finished shooting the initial footage and is now seeking funds to complete the production process via crowd-funding website Indiegogo.

Roberts said, " I really wish for people to understand that no matter how bad life gets, there is a path towards being happy and enjoying life. For a mother of a mass murderer to even want to live, let alone open up her life to others to instill hope, I think is a tremendous lesson in the strength of the human spirit."