Since I grew up as a confirmed, church-going Lutheran and a fan of Golden Age science fiction, I have believed in humanity's potential, and I am proud to say it. Today, I feel thankful that I grew up in what more street-smart high school friends told me was a sheltered environment, because it has enabled me to view what I have since learned is a generally chaotic world through a hopeful lens of values. Hope is an asset, because it keeps me thinking constructively about the increasingly troubling situations taking place in our world, including within ourselves.

On a Philadelphia sidewalk this summer, where I walked after speaking on mental health at a convention, I watched a young man run past, accosting person after random person, yelling incoherently at the top of his lungs. Not two blocks away and five minutes later, a homeless woman screamed obscenities at a pedestrian who walked too close to her and her shopping cart full of belongings. As it dawned on me that such desperation and mental instability had become commonplace among urban Americans, it crystallized my conviction that our people need better access to better tools to strengthen their mental health.

The statistics are stark: Over 60 percent of chronically-homeless individuals in the U.S. have experienced mental health issues. The majority of inmates in state prisons and local jails experience mental illness symptoms. To improve the health of our society, we must provide our people with knowledge and tools to strengthen their brain health as individuals.

As Communications Director for my family's nonprofit, IMHRO (One Mind Institute), I have monitored and shared developments in brain health research for over 10 years. Every year I am amazed at the discoveries and innovations produced by the dedicated neuroscientists with whom I work. From Dr. Vikaas Sohal's research on brain stimulation to treat schizophrenia to Dr. Scott Russo's work to develop immunotherapeutic treatments for depression, exciting progress is taking place, and it fills me with hope for better options for people with brain health issues. 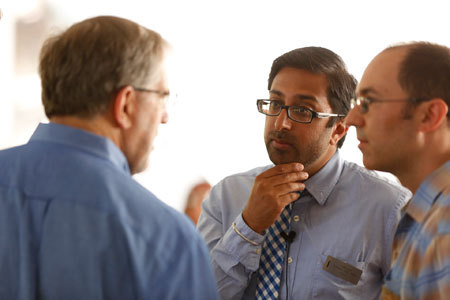 I've been the lucky beneficiary of some of this research. In my recovery from my second episode of schizophrenia, cognitive training has served as a very helpful tool. This form of treatment (which patients can do at home with a computer or smartphone) takes advantage of the brain's neuroplasticity, or its ability to enhance and regenerate its neural pathways with progressive training, much as exercising a muscle builds its strength. In 1998, I participated as a research subject in an IMHRO-funded pilot clinical trial of a cognitive training program in the lab of Dr. Sophia Vinogradov. After two months of dedicated training, my buffed-up brain and I were much better at coherent conversation, and my sense of humor had returned. I even asked the graduate student who conducted my cognitive tests out to coffee. She said no, but I still felt great about being strong enough to take the initiative. Within a few months, I had returned to life among friends and was ready to go back to work.

Today, I am happy to see Dr. Vinogradov's work gain renown, as on the Mental Health Channel

Today, software-delivered brain health treatments are proliferating like wildfire, ranging from cognitive training to mindfulness instruction to motivation building (here is a guide to the evidence base behind some of the best-known). The coolest thing about this class of treatment is that, not being saddled with the side effects that medication can bring, it suggests potential even to be used as a preventive medicine tool as its evidence base grows.

To this end, several clinics nationwide, such as UCLA's CAPPS, which specialize in early and preventive intervention for first-episode or oncoming psychosis, have started to offer cognitive training alongside psychosocial therapy and medication in their treatment programs with encouraging results. With the success of the NIMH's RAISE program in demonstrating that more comprehensive, earlier treatment for schizophrenia makes for better recovery, a $25 million Congressional grant through SAMHSA has enabled 29 states to commit to establishing first-episode clinics in 2015, double the number of 2013.

Thanks to the compassionate scientists, clinicians, and policy advocates who are creating, providing and promoting all these better brain health tools and programs, there is much cause for hope for the future of mental health care. Keep an eye on the brain health space with open mind and heart, and you might catch the hope bug too.

To interact with some of the amazing scientists and advocates who are making the brain health space a better place, please join me each month for open Q&A on my Brain Waves webcast.