The next time you use a debit card, stop and think. No, don't worry about the balance, at least for just a moment.

Think instead of a family on the run, forced out of their homes by the civil war in Syria. With next to nothing, they flee to safety in the neighboring country of Jordan or Lebanon.

All of a sudden, this family has to start life over at a refugee camp in a foreign land. Most or all of their income and possessions are left behind in Syria. How will they get food? How will they keep from going hungry? 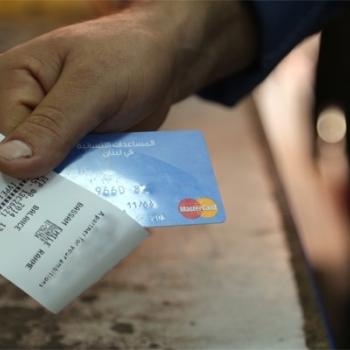 Many Syrian war refugees are getting help in the form of a card that looks very much like the debit one you may have. It's called an electronic card, or e-card. The UN World Food Programme, the largest hunger relief organization, distributes these to needy families.

WFP is providing e-cards to Syrian refugees in Jordan, Lebanon, Turkey, and Egypt. It's an innovative way to deliver food aid to hungry war victims.

The e-cards allow families to go shopping at stores near the refugee camps or settlements. WFP, with the help of its donors and partners, funds the e-cards with a monthly amount. MasterCard, a very familiar name in the credit and debit card business, is helping with the technology behind this groundbreaking initiative.

So now imagine a Syrian family being able to go shopping in a store, very much like they did back at home during peacetime. It's a moment for them when things can get back to normal, at least for a bit. The refugees can choose the foods they want, whereas, in traditional food aid, set rations are given. 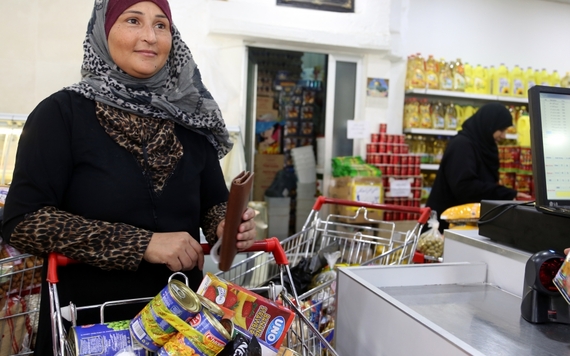 Nofa, 28, is a Syrian refugee in Lebanon. She buys food for her family with the WFP electronic blue card every month. "The card allows us to buy butter, oil, rice, etc. Without it, how are we going to live?! We survived thanks to the card and to God! We cannot abandon the card," she said. (WFP/Sandy Maroun)

Muhannad Hadi, WFP's emergency coordinator for the Syrian crisis, exclaims, "This is a real boon for Syrian refugees who have endured tremendous hardship over many months. The e-cards also bring business to local merchants, and they make WFP's operations more time and cost effective. This is a win for all of us."

The e-card program, as well as paper vouchers, have injected money into the economies of Jordan, Lebanon, Egypt, Turkey and Iraq. This is so important because these countries are under extreme strain from having to take in millions of refugees from Syria. This can lead to tensions between the refugees and the host communities.

Having an economic benefit for local stores helps reduce the chances of those tensions developing. The e-card program is very effective, and one that WFP wants to make available all around the globe. It can work in countries where markets are still functioning and provides a more efficient food aid alternative in those situations.

As good as the program is, there is a problem we need to be very concerned about: funding. WFP relies on voluntary donations from governments and the public to provide food aid. The Syrian war relief mission is one of the largest in history. WFP is feeding over 4 million people inside Syria, and around 2 million in the aforementioned neighboring countries.

The monetary values of the e-cards has been scaled back because of low funding. This means Syrian refugees cannot purchase as much food every month as before.

Now governments and the public could step up the aid and get these programs restored at full value. This is one of the reasons why advocates in the United States, for example, are calling on Congress to increase funding for the Food for Peace program.

Food for Peace is the largest donor to WFP but only makes up less than one tenth of 1 percent of the federal budget. There is room to improve these funding levels.

It's critical the United States and other capable nations do so. The world has to support the Syrian people. It's the only path to peace.

A vital part of the effort is this little blue card, very much like one you may own. It helps feed the hungry in a very efficient way. It prevents families from starving in the most difficult of circumstances and it brings them some precious hope. We should do all we can to see Syrians have this life-saving food.