Far too often in the United States it feels as if the issues surrounding Climate Change are being completely ignored. However, stepping into a symposium on "Global Stewardship through Increasing Climate Science Literacy" at the 248th National Meeting of the American Chemical Society (ACS) in San Francisco this past Tuesday provided a completely different feeling. In order to understand this symposium, it is helpful to describe the primary focus of the project that led to this symposium. 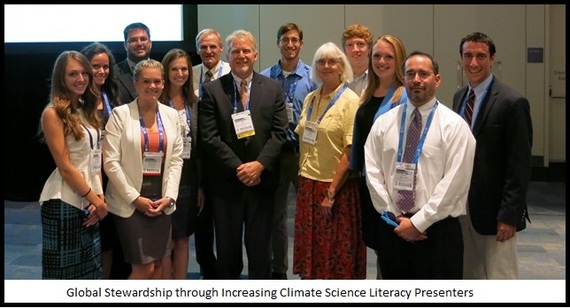 ACS kicked off the recent 2011 International Year of Chemistry (IYC 2011) by sending two undergraduate students from York College of Pennsylvania along with two faculty mentors to the November 2010 United Nations Framework Convention on Climate Change (UNFCCC) 16th Conference of Parties (COP16) in Cancun, Mexico. The primary goal of these students was to learn and report.

From humble beginnings, the project has grown tremendously in scope. The initial two-student local cohort from a single institution has expanded to a national delegation of eight students--the maximum number of UN accreditation slots allotted to ACS--from colleges and universities in eight different states who will represent ACS at the upcoming December 2014 COP 20 in Lima, Peru. As well, the students now cover the entire two week UN climate conference as opposed to one week in earlier years of the project.

The Climate Literacy Symposium in San Francisco highlighted the tremendous progress and achievements of these students who represented ACS at the COPs. The reader can gain some insight concerning this session by browsing presentation titles, but the true energy, intellectual curiosity, and incredible concern for our planet could only be felt by those attending these talks! In this post, I will try to provide some flavor of the concern, enthusiasm, disappointment, and frustration expressed throughout the day long session.

The full-day session began with the project pioneers describing their experience at COP16 as "incredible", "awesome experience", and "three-ring circus." These talented and energetic students managed to negotiate their way into the inspiring final plenary session before the doors closed upon which international delegates began pounding on the doors demanding that they be allowed in to witness the closing. Earlier in the week, one ACS student representative found herself in a personal conversation with UNFCCC Executive Secretary Christiana Figueres. This interaction was so genuine that our young representative had to be told who the woman was with whom she just chatted!

The focus of subsequent symposium presentations shifted to some very specific topics, beginning with a description of the youth umbrella organization YOUNGO (Youth NGOs) which gained UNFCCC official status in 2009. Another talk addressed extreme weather events with a discussion of the intensification of storms including Super Storm Sandy. From these intense storm events, the discussion turned to the severity of drought across the US and the tremendous risk of water withdrawals draining the available water supply in many of these drought stricken areas. The morning talks wrapped up with hope for bringing lessons learned at the international level back home to help solve climate change issues.

The afternoon session followed with similar passion and intensity as the most recent student group which attended the December 2013 COP 19 in Warsaw reviewed measurable outcomes. They were able to generate 19,000 views of their web page (www.studentsonclimatechange.com) that hosts their blogs, over 1,000 "Like"s on their Facebook page, more than 55 followers of Twitter, and greater than 65 followers on Instagram! Social media data confirms that these students are reaching a broad international audience ranging from populous China and India to unanticipated followers in Syria and Iran.

One student presenter juxtaposed known science against inaction by policymakers. He first employed high resolution NASA Hyperwall visualizations derived from satellite data to graphically illustrate climate change impacts. He stated the US sponsored NASA Hyperwall was one of the most popular venues within the conference center. International delegates praise preeminence of US science. By contrast, these same delegates denigrate US obstructionism in the negotiations. The ACS student representatives express frustration that our country continually blocks progress in the negotiations.

These students recognize the urgency and the need for action to mitigate climate change, but they also recognize the tremendous social justice issues surrounding global climate change. In their talks, they highlighted how women are disproportionally affected by the impacts of climate change, yet women are underrepresented within the negotiating process. Empowering women is a clear solution to this inequality.

Our young scientists underscore the key role chemists must play in solving climate change issues through the development of new technologies to increase efficiency in renewable energy sources, carbon capture, and using these tools to move our country toward a zero carbon economy.

The session then moved to a robust panel discussion where the participants talked about how their experience at the epicenter of international climate change negotiations had shaped their futures. Each described a profound personal experience and vowed to continue to do all they could to combat climate change. The symposium concluded with a talk describing how to include sustainability and climate change in the college curriculum. This full day symposium clearly highlighted the ACS meeting theme of Global Stewardship. 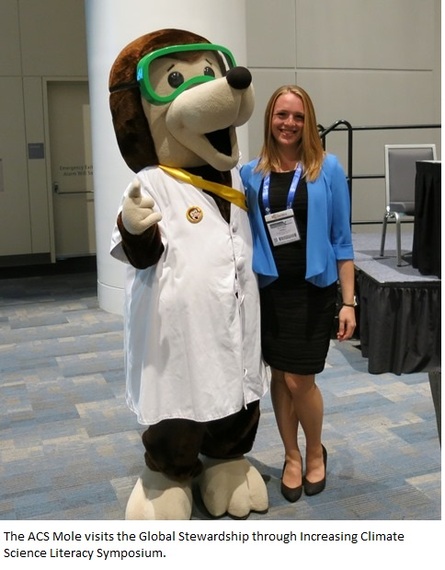 With these incredibly talented students sharing the message of the dangers and solutions to the climate change crisis, there is indeed HOPE FOR THE FUTURE.