Two weeks ago, my son's peanut allergy once again brought me to tears. Before you take a gasp, I want to let you know they were tears of pure unadulterated joy. My son, Joshua, has been part of the Peanut Patch Study conducted out of Icahn School of Medicine at Mount Sinai hospital. He wears a tiny patch of peanut proteins on his skin every day in the hopes that it will help him become more tolerant to his allergen. We are currently in year two of the study.

One of the ways the severity of the peanut allergy is measured and tracked is via a SPT (skin prick test). My son's peanut skin test has been increasing steadily since he was two years old. As a participant in a clinical study, one of the ways the researchers track your progress is via this skin testing. Two weeks ago, at Mount Sinai as part of his study, he was skin tested for peanut again. We have done the skin test several times since the onset of the study and it has stayed pretty much the same. It's kind of fuzzy in my memory but I recall looking at the bumps on his arm and my brain screaming to me - this looks really different. I asked the researcher if it looked different to her as well and she said yes. She asked me if I wanted her to look at the last few prior results. "YES" I replied, unable to keep the tremor out of my voice.

The bumps had indeed become smaller so the tears of joy just flowed from my eyes. We won't know what this practically means until he is fed increasing doses of actual peanut protein in a double blinded food challenge in six months but reports out of DBV Technologies, the company that manufactures the Peanut Patch, indicates in recently released data that the patch shows great promise. For the first time, my son is excited for his next food challenge and is looking forward to it. He has HOPE, and we have HOPE. I spoke with Dr. Hugh Sampson (Professor of Pediatrics and Director of the Jaffe Food Allergy Institute at Mount Sinai) who recently joined DBV Technologies as CSO (Chief Scientific Officer) who said "Epicutaneous immunotherapy (patch therapy) provides a novel, convenient approach to treat food allergies, and we are very excited by the most recent interim results from another multi-center peanut patch trial (VIPES), which continues to show an excellent safety profile and increasing effectiveness in many patients."

As we approach the holiday season and think of all that we are grateful for, I wanted to acknowledge all the doctors throughout the world who are working tirelessly for a cure for life threatening food allergies. I am so very grateful for all of you, but especially grateful to Dr. Hugh Sampson and Dr. Scott Sicherer at Mount Sinai for all of the guidance they have personally given our family. I cannot thank them enough for encouraging us to participate in this clinical study. Blood work and skin prick tests can be measured scientifically, but the hope that you have given us is immeasurable and has made a huge difference in our lives. I hope that we are able, in turn, to give this HOPE to all those who suffer from life threatening food allergies. 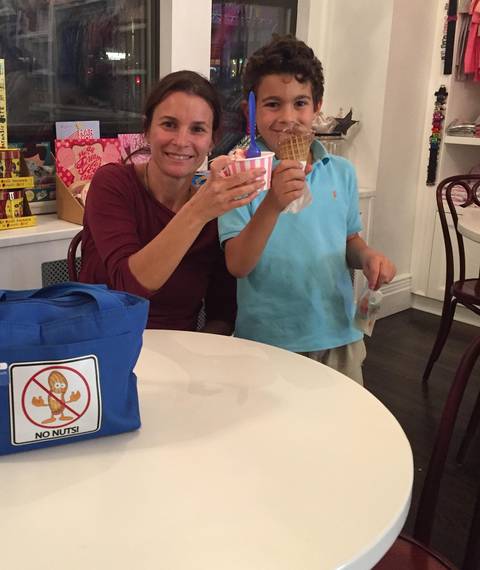 More:
cureParentsgratitudepeanut allergiesfood allergies
Newsletter Sign Up
Raise the kind of person you'd like to know
Subscribe to our parenting newsletter.
Successfully Subscribed!
Realness delivered to your inbox

Founder of No Nut Traveler