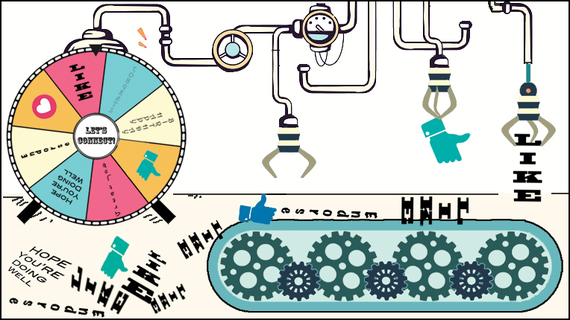 Joseph A. Konstan
Professor of Computer Science and Engineering
University of Minnesota

A few weeks ago I received a message, through LinkedIn, from an old schoolmate. "Congrats on the new role! Hope you're doing well." My first reaction was not nostalgia, or even appreciation. It was a bit of bafflement. See, I've been a professor in the same department of the same school for nearly 24 years. What new role?

Then I remembered. A few days earlier we discovered that LinkedIn had created an "organization" for my lab--the lab I've co-directed since 1995. In an effort to keep things up-to-date, I updated my profile to reflect that title (co-Director, since 1995). LinkedIn dutifully informed my schoolmate of my "status change" and he wanted to acknowledge it, if not carefully reading the detail that it wasn't actually a change at all.

I then received a second, identical message from a colleague I hadn't seen in 15 years. Then a few personal messages from people wondering what this new job was about--was I really leaving the University? And over the next couple of days twenty more form messages, all of them hoping I was doing well. This flood of goodwill probably should have left me feeling blessed for the friends and colleagues who care, but mostly it left me just a little annoyed. Why would these people wish me well in a form letter without even noticing that their message didn't match the facts? Did they care only exactly enough to click a button? Or was there something deeper going on here?

So I took a little time to investigate and ponder. Lightweight social pleasantries have their successes and failures. Even off the grid, we greet each other with "how are you?" yet expect the conventional reply of "fine, how are you?" In the South, the conventional parting message of "come and see us sometime" is a pleasantry--it is not meant to be answered with "sure, how about next Thursday for dinner?"

We've extended these pleasantries online. Whether it is "likes" for an update or a flood of birthday greetings, social media strives to make it easier to keep up with our network. But I've never been upset by a like or a happy birthday; what was so annoying about these messages of congratulations? And how could that be fixed?

I dug deeper into LinkedIn. I found a bunch of colleagues and friends, and many of them were listed with new jobs! Front and center was a Bill, a close colleague. LinkedIn announced: "William has a new job! Professor at Brown University" and encouraged me to say "Congrats!". I could customize the message, but clearly many people don't. But one problem. William didn't have a new job at Brown. William left Brown ten years ago to come to Minnesota, but just updated his LinkedIn profile. My congratulations would have resulted in the same puzzled and perhaps annoyed reaction. But to find out this information, I had to click through to his profile and actually read up on my colleague. With nine people waiting for my congratulations, would I take the time? Or would I end up doing just what my own friends and colleagues had done. When I looked at the LinkedIn Update e-mails I'd so quickly swiped away, I saw many more people I could congratulate, some with empty text boxes to fill, but none showing their full profile or even enough details to write a meaningful message. Suddenly I discovered that my annoyance at my lazy friends was misplaced--I'm not sure I would have done any better.

As a professor specializing in human-computer interaction, I have the luxury of blaming neither them nor me. Instead, I can blame poor design and offer help fixing it. So I wrote this piece to offer free advice to those who use social network systems and perhaps those who build them. I offer four rules by which to use online social networks:

In the meantime, congrats on reading this blog post; hope you're doing well.