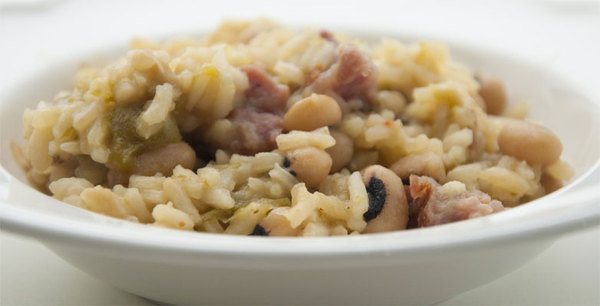 Around the world different cultures have their special traditions for welcoming the New Year and to ensure good luck. According to Jessica B. Harris in Wednesday's New York Times, "In Spain, grapes eaten as the clock turns midnight -- one for each chime -- foretell whether the year will be sweet or sour. In Austria, the New Year's table is decorated with marzipan pigs to celebrate wealth, progress and prosperity. Germans savor carp and place a few fish scales in their wallets for luck. And for African-Americans and in the Southern United States, it's all about black-eyed peas."

The Zen of Beans. Begin by reading this article to learn about how to handle dried beans and canned beans.

Boston Baked Beans. They don't call it Beantown for naught. For it was in Boston that the notion of mixing dried beans with molasses was concieved and still reaches the peak of perfection.

Grannies Texas Beans. During hard times, beans have kept many Texans alive. For more than a few, the bean pot contained simply beans, salt, pepper, and maybe a little pork fat or bacon. You can go crazy with additions, but this is the classic, simple, home style recipe. When you visit classic Texas pitstops, beans are almost always on the menu, and outsiders, particularly Yankees, are often surprised to discover that they are simple and not sweet.

New Orleans Red Beans & Rice. In New Orleans, Sunday is traditionally ham night, and on Monday, wash day, the leftover ham and the ham bone are used to make Red Beans and Rice, a traditional Creole classic main dish that can be prepped quickly and needs several hours to simmer. It has been thus forever.

Kentucky Bourbon BBQ Baked Beans. Meathead's twist on the theme makes Baked Beans soooo much better than the stuff from the can. Bourbon is the secret.

Black-eyed peas' most popular expression is Hoppin' John, a steaming bowl of beans, rice, and pork especially popular in coastal South Carolina and Georgia. It probably originated with black slaves from the Caribbean brought in through Charleston around which there were large rice plantations. It is still very popular among the Gullah on the Carolina coastal islands where Hoppin' John is widely served on New Year's Day for good luck. It is believed that eating beans on New Year's Day will bring better eats in the year to come. According to one tradition, a coin is added to the pot and whoever gets the coin will get rich.

There are several poetic explanations for how the dish got its name. One claims that it got its name in the early 1800s when it was peddled on Charleston streets by a one-legged black man named John. Likewise there are a number of explanations for why beans symbolize good luck. Some ascribe their magical properties to fables like Jack And the Beanstalk, others call it a symbol of fertility, others say the black-eye saved the South from starvation during the Civil War.

I've kept this recipe simple and traditional, but there are numerous variations, so feel free to riff on it. I've been known to add red pepper and thyme. To modernize it, hold the green peppers until you add the rice to retain their brightness and crunch. In the original recipe the peppers kind of disintegrate. If you hold them until the end they add life.

About the ham hocks. Many grocers sell smoked ham hocks. They add flavor and a rich tactile sensation from the skin and connective tissue and the marrow which dissolve while it cooks. Some of them have very little meat. Select two with meat. If you can't find hocks, you can substitute 1/2 pound smoked ham, bacon, or leftover pulled pork.

Do this
1) Click here to read my article, The Zen of Beans, for tips on working with beans and equivalents for dry, canned, and cooked beans. Decide which you will use. If you plan to use dried beans, follow the instructions there for soaking them. If you plan to use canned beans, move on to the next step.

2) Get a large pot hot and add the oil. Add the ham hock, onion, green pepper, garlic, pepper flakes, and the bay leaf. If you can't find a ham hock, you can use bacon, just skip the vegetable oil and start by cooking the bacon in the bottom of the pot and pour off all the bacon grease except 2 tablespoons.

3) When the onions are limp, add the chicken broth and bring to a boil. Add the beans, bring back to a boil and dial it back to a simmer quickly. Do not boil for more than a minute or two. Simmer for at least an hour.

4) Remove the bay leaf and if you use ham hocks, cut off the meat, add it to the pot, and discard the bones and skin.

5) Add the rice and simmer with the cover on for about 25 minutes or until the rice is tender and most of the liquid is absorbed. Serve with salt and pepper at table. Hoppin' John gets a lift from fresh ground pepper at the table.

Do you have any New Year traditions involving food? Tell us about them!

All text and photos are Copyright (c) 2010 By Meathead, and all rights are reserved