With television drama, it's not often that we get to say OMG, look what just splashed down. With Louie C.K.'s new Horace and Pete, we do.

Horace and Pete is a 67-minute drama that C.K. posted on his website Saturday, without a syllable of advance notice. You watch by going to the site and paying five bucks.

Pay-per-view isn't exactly a new business model, any more than Horace and Pete delivers revolutionary dramatic content. The DNA of previous Louis C.K. productions, including his self-titled FX show and his fascinating new FX drama Baskets, is all over this one.

Still, Horace and Pete gets your attention, and while it clearly was not a long protracted production, that doesn't make it some quickie home movie that C.K. put together because he got a new GoPro for Christmas. 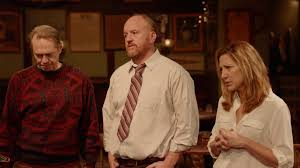 This is polished, quality stuff, starting with the cast. He has rounded up Steve Buscemi, Alan Alda, Edie Falco, Jessica Lange, Steven Wright, Rebecca Hall and a dozen others who weren't just sitting around waiting for something to fill their otherwise unoccupied afternoon.

The story itself has C.K. and Buscemi as the title characters who run a bar called, yup, Horace and Pete's.

The bar was started a hundred years ago by the first Horace and Pete. It's been passed down through multiple generations of the family, always to a Horace and a Pete.

As will happen, the gene pool has suffered some dilution, particularly in sense of purpose.

The current Horace at times seems indifferent to the place, largely because he's trying to figure out why his own children don't like him much.

In that sense, he's the same character that C.K. plays on Louie - the bewildered Everyman who thinks he's doing everything the way he should and can't understand how some of it so completely misses.

It doesn't help that he's surrounded by people with their own eccentricities, and that of course is a tentpole of almost everything C.K. writes: The world is filled with bizarre people who have no idea they're bizarre. 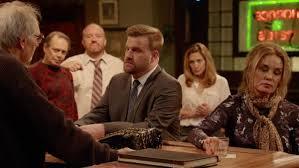 That creates a rich pool for comedy and tragedy, and C.K. has brilliantly carved a niche where he incorporates both into the same production.

With Horace and Pete, the viewer can simultaneously burst into laughter and recoil in horror when Buscemi's character summarizes previous Horaces and Petes by declaring, "They beat their wives and they raised their sons right."

Watching Horace and Pete does require some tolerance for unfiltered language. Alda plays the previous generation's Pete as a perpetually annoyed old man who uses the n-word, and other words, to declare he's not a racist.

As all this suggests, Horace and Pete is primarily character drama. A cast of harmlessly eccentric people seem to frequent the bar, a la Cheers, and they slowly develop their own personalities, a familiar mix of boisterous, desperate, quiet, inquisitive, perceptive, lost and well, you get the idea.

They're the ones, for instance, who get to argue politics, a discussion that's striking partly because it references things that happened this week.

Similarly in a sports argument, Lange's Marcia scoffs at the showboating of Carolina Panthers quarterback Cam Newton - meaning that scene was also shot in the last few days.

That gives the characters, like the show, an air of freshness. But there's also a longer story going on. 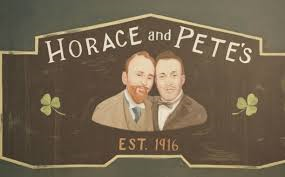 Seems the current Horace and Pete aren't doing such a great job running the place, which is no surprise given Horace's preoccupation and the fact Pete needs expensive medication to prevent psychotic outbursts.

So Horace's sister Sylvia (Falco), who owns half the bar since their father died without a will, comes in with her lawyer to announce that their dereliction means she can take over the joint - and sell it.

Where this will go remains unresolved, making it quite likely we will see more Horace and Pete episodes, which raises the further question of whether fans will like it enough to pay, say, $25 for five episodes.

It works with boxing matches. Could it work with a series drama?

C.K. may have hinted at his own answer earlier this month when he was talking to TV writers about Baskets. While his comedy may appeal to a "tiny, tiny subset" of TV viewers, he said, "You can make some bucks on tiny."

At the same session, he said "I don't know" several times when asked if he's going to write any more seasons of Louie. It's now clear that for the moment he had already turned his attention to the free-standing Horace and Pete.

It may not be the wave of the future. It's one that C.K. fans will want to ride.