Hormel has long been one of the country's biggest meat companies, with two of the 10 best-selling brands of bacon in America and sales of over $8 billion a year. But until now, the company has done little to respond to the shift in consumer preferences toward humanely raised meat and minimally processed foods.

Hormel's purchase of Bridgewater, New Jersey-based Applegate -- which narrowly beats out Hormel's 2013 acquisition of Skippy peanut butter as its largest buy ever -- changes that with one stroke.

Since it was founded in 1987, privately owned Applegate has grown into the country's largest producer of natural and organic processed meat, with sales estimated at over $300 million a year, according to the Wall Street Journal. It's best known for its popular organic hot dogs and artificial nitrate-free bacon. The company had been thought to be seeking a buyer for some time, and Hormel seemed the most likely taker as far back as February.

The sale follows several years of consolidation in the food industry, with the March merger of Heinz and Kraft serving as the most dramatic example in recent months.

The meat sector has been particularly active, at least since the controversial $4.7 billion purchase of pork giant Smithfield by Chinese meat processor Shuanghui International Holdings in 2013. Compared to that deal, and Tyson's 2014 acquisition of cured meat company Hillshire Brands, Hormel's purchase of Applegate is relatively modest. 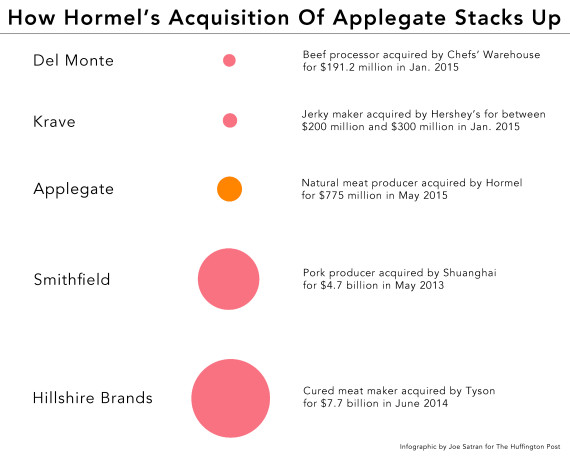 Yet Applegate's prominent position in the sphere of natural meats, and its historical commitment to working with small farms, lends the company's acquisition by the makers of Spam a certain outsized significance. The two companies' philosophies seem directly at odds. For that reason, the move has already angered some longtime Applegate customers.

The two companies, for their part, issued a statement that affirmed their commitment to maintaining Applegate's standards after the merger.

"The Applegate team has built a great brand, and consumers can rest assured there will not be any changes to the way Applegate meats are raised and produced," Hormel CEO Jeffrey Ettinger said.

“It was my mission from the start to change the way we think about meat –- how it’s raised and produced -– and this agreement is definitely a continuation of that mission,” added Applegate founder and CEO Stephen McDonnell.

With the market for organic and natural foods growing larger and more lucrative every day, this will surely not be the last major producer of such foods to be gobbled up by a corporation less committed to health and environmental stewardship.