Say hello to one of Triceratops' oldest relatives.

Scientists recently discovered the fossilized bones of a striking new species of horned dinosaur in southern Alberta, Canada. The 200-plus fossils are believed to have belonged to four specimens of Wendiceratops pinhornensis--three adults and one young dino.

According to the researchers, W. pinhornensis lived about 79 million years ago. Measuring about 6 meters (20 feet) in length and weighing more than a ton, it sported a parrot-like beak suited to eating scrubby plants. And while the dinosaur likely had a wide frill extending from its neck and horns over the eyes, its most bizarre feature was the giant horn on its nose. It's the earliest known example of a tall, upright nose horn in the horned dinosaur family. 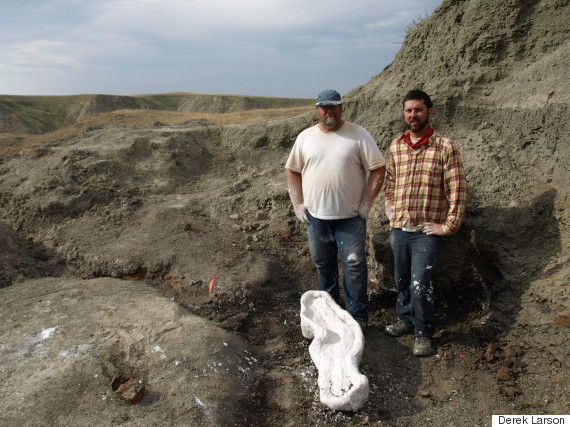 "Beyond its odd, hook-like frill, Wendiceratops has a unique horn ornamentation above its nose that shows the intermediate evolutionary development between low, rounded forms of the earliest horned dinosaurs," Dr. Michael Ryan, curator of vertebrate paleontology at the Cleveland Museum of Natural History in Ohio and co-author of a new paper about the discovery, said in a written statement. "The locked horns of two Wendiceratops could have been used in combat between males to gain access to territory or females."

The researchers noted that the horn was an anatomical feature that Wendiceratops apparently shared with other horned dinosaur species that appeared later, including Sinoceratops and Styracosaurus.

And those similarities may help explain how these dinos evolved.

"Wendiceratops helps us understand the early evolution of skull ornamentation in an iconic group of dinosaurs characterized by their horned faces," Dr. David Evans, curator of vertebrate paleontology at the Royal Ontario Museum in Toronto and another co-author of the study, said in the statement. "The number of gnarly frill projections and horns makes it one of the most striking horned dinosaurs ever found."

A Wendiceratops skeleton is now on display at the museum.

The paper was published online in the journal PLOS ONE on July 8, 2015.

What were dinosaurs really like? Check out the "Talk Nerdy To Me" video below for dinosaur myths that you probably thought were true.