I suppose the true horror of having an American child only really occurred to me when a random toddler stumbled over to my stroller in a Santa Monica park, grabbed my son's water bottle and slugged it down. I shrugged it off and smiled as a horrified mother whipped it out of her child's hands. "It's OK," I reassured her. "It happens. I don't mind."

She started making strange "PTHUGH" noises and miming -- what we term in England -- hawking a greenie. "Spit it out, Apollo! Spit it out!" Her son ignored her, finished slurping the water and ran off to bash some other kid in the face with a Melissa & Doug wooden piece of shit in the sandpit. She turned abruptly to me with an ashen face, regarding the water bottle as if it was contaminated with Ebola. I hoped briefly she wasn't one of those gun-carrying parents who pride themselves on their concealed firearms. But then remembered I was in Santa Monica and all I had to fear was fake Kickee Pants onesies at yard sales. She fixed me with a glare and demanded urgently, "Does your son eat gluten? Because we run a gluten-free household."

Wheat, sugar, sodium, GMO's, infant formula, TV, plastic, modern medicine, balloons: these are the terrors plaguing American children. I have never in my entire life considered a balloon a vehicle of death for a child, but since having a baby in the U.S., I have been told repeatedly that any balloon not scrutinized with the utmost attention might malevolently dart into my son's throat and throttle him. In the U.K., we prefer to imagine our children dying through childhood cancers, asphyxiation via plastic shopping bags, imbibing household bleach or wandering onto building sites with frayed electrical cables and rusty nails lying around. Balloons, in contrast, are relatively innocuous. In L.A., balloons are what separate parents into two categories: responsible and British.

"In America, I've been told to breastfeed my son in the toilets rather than risk someone seeing an errant nipple, and all chaos breaking loose."

Perhaps British parents have a more laissez faire attitude because they are more supported by the government and employers. In America, new parents receive inadequate support across the board. Even California’s paid family leave program, which provides partial pay to mothers and family members supporting a new child for up to six weeks after birth, is still far behind the U.K.’s 90 percent pay for six weeks, then government support for six months. A U.K. mother’s job is protected for her for up to one year, with the option of her partner taking six months off with her or after her. A friend of mine in Kentish Town found herself in the unusual position of being married to a Brit working for an American company. When she had her first child, he had no paternity leave, unlike his peers working for British companies. She had to rely on grandparents for support -- which in this day and age, is an option for fewer and fewer people. My grandparents, for example, found the 6,000-mile commute a little much even for their darling grandson.

In the U.K., nursery education is free and available to anyone who wants it. Most friends I know pay a little more so they can send their toddlers to nurseries or daycares for slightly longer than the government-provided, free 15 hours. Sure, I have friends who detail the horrors of scrambling to get school places, spending a fortune moving into better school districts and sending their 2-year-old children to Suzuki classes. But "hot housing" is generally frowned upon and learning through play encouraged. In L.A., of course, land of unschooling, "learning through play" takes on a whole different meaning. Earnest parents yank their kids out of schools in case someone might figure out they're not vaccinated and concoct their own school curriculum based on whatever they picked up from the Internet.

I guess the differences in parenting start early, from pregnancy. There's a puritanical streak in the U.S. that the natural birthing movement and the lactivists tap into. British mothers breastfeed more than their American counterparts. All healthy pregnancies are handled by U.K. National Health Service midwives, who can and will give laboring women gas and air, which significantly reduces the need for other pain control. Thus, natural births seem way more common and unremarkable than they do in the States. Similarly, women seem to feel little guilt, shame or self-loathing when their planned water birth gives way to a C-section, when they decide breastfeeding isn't for them or when they wean, usually around six to nine months.

"In the U.K., most middle-class moms take a year off work. Going back to work after six months is seen as extreme and unusual."

In contrast, Americans, in their attempts to invigorate the dying art of birthing and breastfeeding, seem almost to police new mothers with each decision they make -- from choice of OB, to brand of diaper, to the decision between boob or bottle. They even have vast networks of support groups for mothers who didn't get the birth they wanted to recover from their "trauma." They may be onto something. America has one of the highest C-section rates in the world, at 34 percent, and the majority of hospital births receive (often unnecessary) medical interventions in the form of either epidurals, pain relief or Pitocin and labor augmentation. Once you've had your baby in the States, you get a mere few weeks to recover, and you're lucky if you qualify for six weeks of disability pay. In the U.K., most workplaces allow you to take a year off work, much of it with pay. In the U.K., most middle-class moms take a year off work. Going back to work after six months is seen as extreme and unusual.

Breastfeeding -- which I did and still do, seventeen months after the birth of my son -- is like a competitive sport in the States. Partly this is probably because of the weirdness surrounding the act of nursing. Americans still haven't gotten to grips with the idea that breastfeeding relegates boobs into unsexy things that keep your kid alive. Brits seem pretty OK with this, and I've yet to see a Brit wear one of those hideous nursing aprons. Americans like to hide their newborns under nursing aprons in public.

In America, I've been told to breastfeed my son in the toilets (as if eating your lunch where someone defecates is in any way acceptable) rather than risk someone seeing an errant nipple and all chaos breaking loose. In contrast, I was shopping in Whole Foods in Camden, London only last week when my jet lagged toddler started crying hungrily. I sat on the floor out of the way and started to nurse him quickly, hoping no one would see me and throw me out or inform me I had to sit on a sh*tter to feed my kid. A sweet middle-aged female employee came up to me. "Excuse me," she started, and I braced myself for battle, "Do you want me to get you a chair so you can be a bit more comfortable?"

"You don't often hear a firm 'No' said to an American kid -- not without a long and apologetic explanation."

The favored discipline in Los Angeles seems to be mom adopting a whiny voice and embarking on a long philosophical discussion involving reason, ration, logic, compassion and common sense -- all about why it's wrong to clobber mommy over the head with a fish tank. In England, we just say "No" or "Stop that" or even "F*ck that hurts" and save the philosophizing for when our kid's language skills comprise a little more than "bubbles" and "more."

Case in point: overheard at the London Fields Lido this afternoon: "No, you can't have that chocolate. Stop whining. You're pissing me off," said in an amiable, if slightly pissed-off tone -- a tone that would undoubtedly result in several visits from Child Protective Services if uttered in the U.S. God forbid a parent ever lose her temper with her child. I'm not talking pathological rage and throwing shit but I've rarely seen an American parent submit to the inevitable irritation children provoke without massive feelings of guilt and self torment.

There seems to be a sense that the American child is a fragile, precious being. They must wear helmets for all activities involving wheels (something which would induce sniggering in all but the most neurotic of British parents), they can't be vaccinated like children in the rest of the world and their foreskins must be severed at birth" lest their sons prove incapable of cleaning their own pee-pees and practicing safe sex.

"Perhaps British parents have a more laissez faire attitude because they are more supported by the government and employers."

However, on the downside, British kids have lots of boogers. Lots and lots of snotty boogers. In the States, you cannot -- cannot -- turn up for a play date with a sickly child sporting the symptoms of any kind of illness. Your house becomes quarantined, and you become a pariah, forced to fight off the illness with snot suckers, olbas oil, umcka, homeopathy and various naturopathic quackery purchased from Whole Foods before you go anywhere near doctors. In England, parents cheerfully ignore the signs of childhood plague and just get on with things until imminent death presents itself.

I recently showed up at my friend's house in East London, after a long international flight from L.A. during which my son and I had developed the most violent, feverish, congested, nasty cold I'd had in years. Despite having two young kids under four, my friend was completely unconcerned by our diseased selves landing on her doorstep. Her own kids smiled cheerfully through their hacking coughs and long green sticky slugs inching obstinately out of their noses, occasionally wiped onto whoever's sleeve (or piece of furniture) was available. "Oh whatever. It's good for their immune system."

In America, brittle smiles mask the silent scream of the new parent, and who can blame them? Parents are given no time to bond with their children. Foisted back into the workforce merely weeks after their bodies expel a living being that has taken nine months to grow, they decline quickly into hormonal and lifestyle Armageddon. Surviving on little sleep, they work full-time hours and pass their kids onto paid strangers or irritating family members to bring up, living under constant, jealous judgement from their similarly traumatized and dysfunctional peers. I'm a single mother going through a messy divorce and custody battle. In the U.K., it's all tea, biscuits and sympathy. In the U.S., no one wants to know because dysfunction might be catching, and this parenting business is way too complicated as it is. 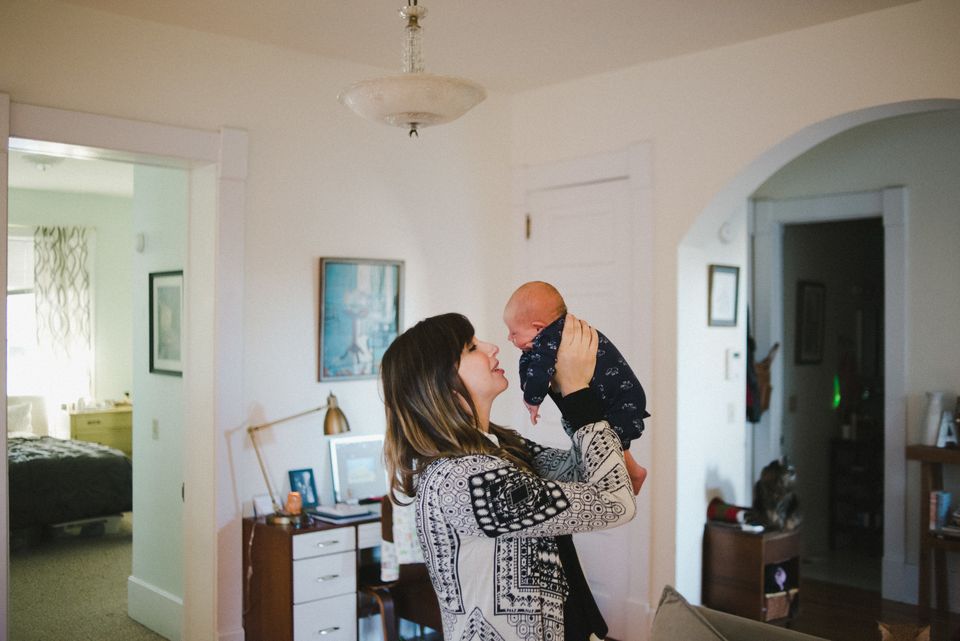