Scientists poking around Ethiopia's fossil-rich badlands say they have discovered the first pieces of an extinct species of horse that was about the size of a small zebra and lived about 4.4 million years ago.

The specimens were found in what is now an arid desert. But at the time this grass-eating horse roamed the planet, the region would have been covered in grasslands and shrubby woods — rich grounds for grazing.

Fossilized traces of the horse, which was named Eurygnathohippus woldegabrieli, were uncovered in the archaeologically rich sites of Aramis and Gona in Ethiopia's Middle Awash valley. The region is famed for bearing the world's longest and most continuous record of human evolution. The extinct horse in this study would have actually been alive at the same time the 4.4-million-year-old human ancestor Ardipithecus ramidus, or "Ardi," walked the region. [Beasts of Burden: Amazing Horse Photos]

"Among the many fossils we found are the two ends of the foreleg bone — the canon — brilliant white and well preserved in the red-tinted earth," study researcher Scott Simpson, of Case Western Reserve's School of Medicine, said of the horse discovery.

The leg bone bits indicate this horse had longer legs than its ancestors. The shape and size of the leg suggest the beast was a fast runner, a skill that may have helped it flee predators like lions, sabre-tooth cats, Simpson and colleagues say.

The horse's teeth show signs of another departure from more ancient species: With crowns worn flatter than the teeth found on its ancestors, it seems this creature became adapted to a life of grazing. An analysis of the enamel on the fossilized teeth provided further evidence that it subsisted on grass like today's zebras, wildebeests and white rhinoceroses, the scientists say.

"Grasses are like sandpaper," Simpson explained in a statement. "They wear the teeth down and leave a characteristic signature of pits and scratches on the teeth so we can reliably reconstruct their ancient diets."

The animal belonged to a group of ancient horses called Hipparionines, which had three-toed hooves and arose in North America about 16 million years ago before spreading into Eurasia, presumably over a land bridge that once existed between Alaska and Siberia. The researchers say this discovery helps fill in a blank spot in the evolution of horses, before the animals became even better suited for a life in the grasslands, growing taller and developing longer snouts, for example.

"This horse is one piece of a very complex puzzle that has many, many pieces," Simpson said in a statement.

The research was detailed online in the Journal of Vertebrate Paleontology. 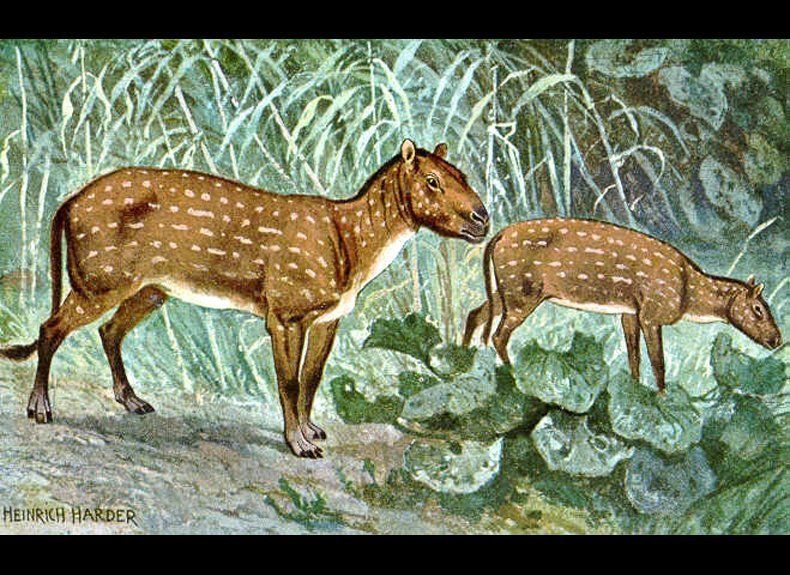