St. Thomas Health is the second-largest hospital system in Nashville, Tennessee. This spring, they launched a sweeping multi-media advertising campaign centered on a verse from the Gospel of Luke: "For with God, nothing shall be impossible - Luke 1:37." On billboards, park benches, city buses, and television commercials, this text accompanies striking photographs of newborn babies, cancer survivors, and other exuberant patients being cared for in wheelchairs or hospital beds. Like a promise, the ads suggest to faithful Christians that miracles are possible.

My daily commute takes me past St. Thomas's west Nashville location. As often as I see ambulances or helicopters arrive at the hospital, I also see slow-moving hearses pass below the banner as they exit the complex. For every "miracle" that happens in those buildings, suffering and death rain down tenfold. I began to wonder how grieving families or patients discharged from the hospital with serious pain or disability might read that scripture. "Miracles can happen," it seems to say, "just not to you."

After a surgery at St. Thomas two years ago that left her with chronic pain even today, Eve Davidson, 34, received the message this way. "The ads make me feel like I am unworthy of being healed," she reflects. "Every time I see that banner I am reminded that 'nothing shall be possible' to heal me."

Indeed, the campaign strikes a negative chord for many. Rev. Viki Matson is the director of Vanderbilt Divinity School's Field Education program and formerly a chaplain at St. Thomas Health (1985-1996). "At times of great spiritual anguish for patients and families, I find it completely inappropriate that the hospital that is charged with their care would make promises about God they simply cannot keep," she says. "Implying that miracles happen in this hospital, that the impossible is somehow possible, is a slickly marketed version of snake oil."

Former hospice chaplain Peter Capretto expresses a similar concern. "The ad campaign walks a fine line between expressing an essential Christian motivation in healthcare and capitalizing on the religious expectations of vulnerable individuals and families," he says. "While the fiscal outcomes of the message may be measurable, the social and spiritual consequences to patients and their loved ones are not, which is precisely the danger."

Less grandiose than its current advertising campaign, St. Thomas's long-standing mission reads, "Rooted in the loving ministry of Jesus as healer, we commit ourselves to serving all persons with special attention to those who are poor and vulnerable," it reads. A typical day at St. Thomas begins with a prayer over the hospital-wide intercom, and a crucifix hangs on the wall of every patient room. St. Thomas is unapologetic about its Catholic foundation and commitment to the spiritual health of patients. However, the advertising campaign appears to take this a step further and move from spiritual health to spiritual manipulation.

Representatives of St. Thomas Health and the Bohan Advertising Agency were quick to defend and celebrate the campaign as well as cite the effort they put into getting it right. "We wrestled with this [concern] a lot," says Jeremi Griggs, who directs the St. Thomas account with Bohan. "What does this mean to people in bad situations?"

Griggs explains that the scripture isn't a promise that miracles will happen, but rather an expression of hope. "We believe that with God, the impossible can happen," he says. "If it doesn't turn out that way, with God I can move on, I can see a bigger plan, or I can recover." He points out that St. Thomas Health views itself as a ministry, and this message of hope is its defining feature.

Rebecca Climer, Senior Vice President and Chief Communications Officer of St. Thomas Health, agrees and points out that the campaign is the product of a two-year "purpose initiative" and process of discernment. "[We] are not ignoring or insensitive to the fact that lives end, injuries and illness happen, and work is difficult," reads a disclaimer of the campaign on the hospital's website. "We are saying that, by working together as one healing community and within the will of God, we bring about the reign of God here on earth." Like Griggs, Climer emphasizes the "hopeful" message and notes that the campaign is "inspirational and aspirational." And like Griggs, she is quick to point out, "We do not want to trade on our faith."

Both Griggs and Climer insist that St. Thomas Health does not want to "trade on its faith." But by presenting Luke 1:37 as the central motif of a large, multimedia advertising campaign, that is exactly what they are doing. The scripture combined with inspirational photographs of people at various stages of surviving various ailments suggests that such survival is possible, and it is especially possible at St. Thomas Health because God is on their side.

Just down the street from St. Thomas West Hospital, a large billboard looms over a busy intersection. Equipped with an ever-changing digital number, it announces exactly how many minutes (usually a very low number) one can expect to wait in the emergency room of another local hospital. As drivers continue down the road, the miracle of a short wait in the emergency room is quickly eclipsed by the miracle of surviving any disease or injury that St. Thomas offers. By offering a spiritual remedy in the form of billboards and television commercials intended to lure patients into its care, St. Thomas is exactly "trading on faith."

Photographer Jeremy Cowart worked with the ad agency to produce the campaign's imagery. "It's a message of hope," he says. "I would want to know that my hospital believes that anything is possible. Miracles happen every day, and this scripture is incredibly inspiring and hopeful to me."

Few of the people I spoke to had any idea about the actual context of Luke 1:37. It comes when Mary questions the angel Gabriel about how she will become pregnant since she is a virgin. Gabriel points to her cousin Elizabeth, who is pregnant after many years of having been barren, and announces, "nothing will be impossible with God" (NRSV). Indeed, Mary does become pregnant. The implication of draping this verse across a hospital entrance is that any kind of healing is possible: a barren woman becomes pregnant, and then even a virgin becomes pregnant.

Ellen T. Armour is the Carpenter Chair in Feminist Theology at Vanderbilt University. Her concern is that this ad campaign opens up the question of theodicy--reconciling God's goodness with suffering in the world. "My worry is that patients may even blame St. Thomas when they don't get the miracle they're essentially promising," she says. "Ascribing success to divine intervention means that you risk ascribing failure to God's callousness. Why didn't God intervene in my case?"

Armour points to the promise of God's presence as depicted in the Psalms or in the Gospel of John as better theological responses to patients and families who don't get the outcome they were hoping for. Similarly, Viki Matson also suggests that a stronger, greater hope lies in the Jesus who accompanies (as in Romans 8) rather than a God who performs miracles.

Cowart was drawn to the advertising campaign by the resonance of the Luke verse in his personal life. "That's a very similar verse to Philippians 4:13 which says, 'I can do all things through Christ who strengthens me,'" he writes on his blog. "My Dad taught me that verse over and over growing up cause I never really thought I was capable of anything. So this theme for the verse really hit home."

Also distinct, the Philippians verse says something quite different than the Luke text, and perhaps offers a better way forward for those who struggle with celebrating a saving and healing God who neither saves nor heals them. The idea that Christ offers the strength to face whatever difficult outcome rather than the power to alter events removes the risk of disappointment and faith crisis.

Patients and families may also be encouraged by the moments in scripture in which Jesus struggles with his own suffering. At Gethsemane he asks, "Father, if you are willing, remove this cup from me" (Lk. 22:42-44//Mt. 26:36//Mk 14:36). In the Gospel of John, Jesus grieves alongside Mary and Martha for Lazarus when he appears to arrive too late to save him ("Jesus began to weep" Jn. 11:35).

The twenty-third psalm has long offered the comfort of God's presence to those who grieve: "Even though I walk through the darkest valley, I fear no evil; for you are with me; your rod and your staff--they comfort me" (v. 4). These verses don't play as well in the advertising world as promises of the impossible, but they may come closer to providing comfort to those who are sick or injured and their families than hope for a miracle that only comes to a select few. 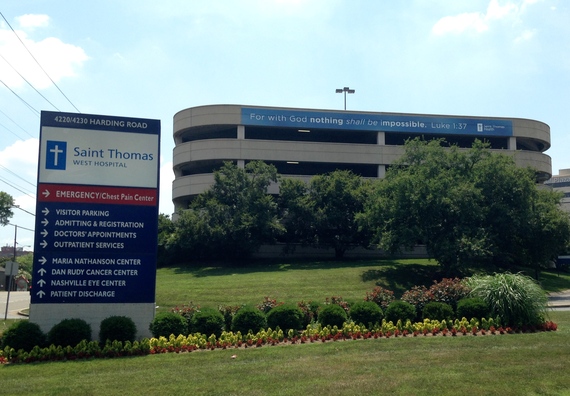 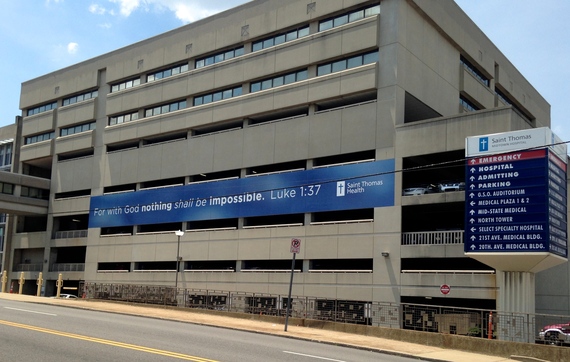 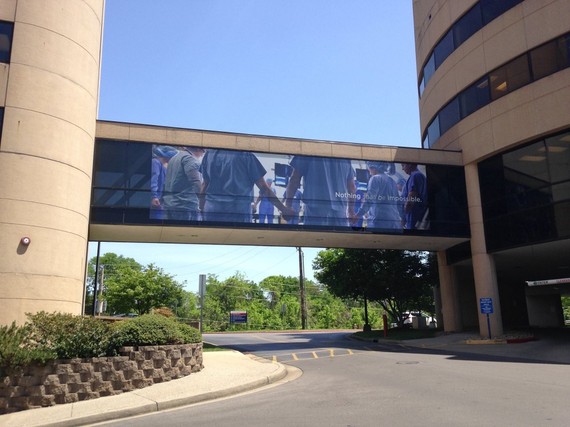 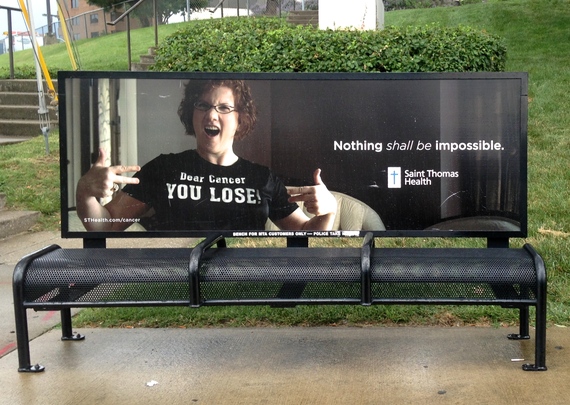 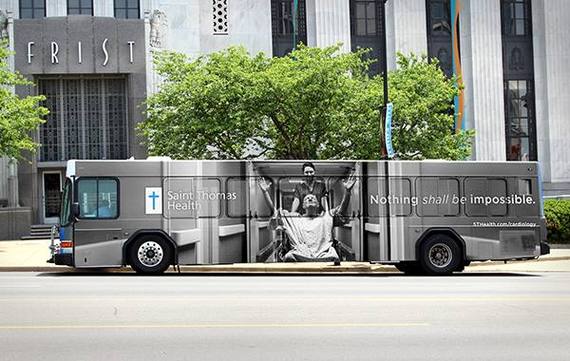