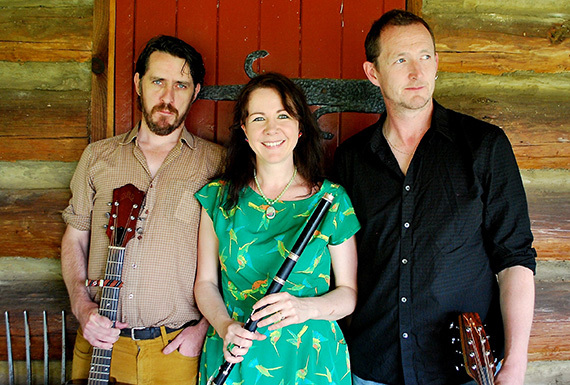 As usual at this time of year, I'm heading off to the annual Folk Alliance International Conference, the world's largest gathering of the folk music industry and community. I'm flying to Kansas City, where I'll see everything from traditional fiddlers and ballad singers to old-time and Celtic bands to Singer-Songwriters, Americana artists, and contemporary Roots bands. There's a smattering of everything American, from Tex-Mex to Klezmer, a sizable contingent from Canada, and folks from all over the world. All told there will be over 3000 artists and industry folks in attendance, including composers, agents, managers, publishers, labels, buyers, promoters and archivists. There will be round-the clock music at official and "guerrilla" showcases on designated floors of the hotel.

I'll be there as a representative of our national folklore archive, the American Folklife Center at the Library of Congress. Each year my partner Jennifer Cutting and I give a presentation about how folk musicians can draw inspiration from our archive. But this year, since it's Alan Lomax's centennial year, I'll be talking specifically about Lomax's collections. Jennifer will be on the archiving panel. We'll have a booth in the exhibit hall all weekend. And we'll also be running the Lomax Challenge Stage, a 90-minute segment for which folk artists from around the country (and Canada too), have agreed to learn a song collected by Lomax and perform it. Artists who have signed up include Dom Flemons, Roosevelt Dime and Melisande. We'll have performances in English, Spanish and French, of both well-known classics and hidden gems of the Archive.

So in preparation for my trip, here's a rundown of some of my favorite folk releases of the recent past -- and the near future. (These opinions, by the way, are my own, and don't reflect my role at the library.)

The Alt are one of my favorite Irish groups of recent years, and a nice corrective to so many bands who concentrate on high-speed instrumentals. Their focus is on the song tradition, with old ballads and love songs at the core of their self-titled album. These pieces are lovingly selected from unusual corners of the folk world: source singers such as Irish Traveler John Reilly and English laborer Henry Burstow, folk revival acts like The Halliard and Norma Waterson, and books like Sam Henry's Songs of the People all get a mention in the liner notes. Even if you think you know the song, chances are their combination of words and tune is a variant you haven't heard before, like their marriage of Reilly's words for the old Child ballad "Edward" with the English tune used by Nic Jones, or their use of an unusual text of "Banks of the Bann" with the tune used by Silly Wizard. All three band members, John Doyle (Solas), Eamon O'Leary (Murphy Beds) and Nuala Kennedy (Nuala Kennedy Band) are strong lead vocalists and harmonizers, and Kennedy's singing is equally enchanting in English and Gaelic. Vocal harmonies, crisp guitar and bouzouki, and melodic hooks on the flute embellish the songs with arrangements painstakingly crafted to highlight each piece's best qualities. There's an almost unnecessary level of detail and variety, with harmonies and instrumental parts often changing from verse to verse, which dazzles you with subtlety rather than flash. In other words, the closer you listen, the better they are. And if you do like high-energy tunes, there's a couple of sets here reminding you that these folks are brilliant at that too. It's a truly great album. Find it here. 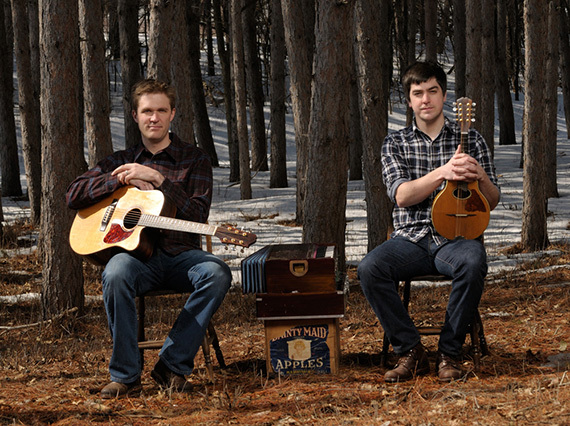 Brian Miller and Randy Gosa. Photo by Darin Back. Courtesy of Brian Miller.

Two of the Alt's members live and work in the U.S., and they recorded the album here, making them part of the long story of Irish music and song in America. Another piece of that puzzle is provided by Brian Miller and Randy Gosa on their release The Falling of the Pine, which presents lumberjack songs from 19th-Century Minnesota, Michigan, and Wisconsin. Many of these songs were preserved in oral tradition to be collected by archivists and folklorists in the 20th century, and a good portion of them are on recordings in the archive where I work. Miller has visited our archive to hear cylinder recordings of Michael Cassius Dean and disc recordings of Warde Ford, both of whom had Irish ancestors and worked at logging in the north woods. Miller's research alerted us that about thirty of our cylinders from the early 1920s featured Dean, who compiled one of the first books of logging songs; the recordist, Robert Winslow Gordon, had labeled only a few of them, with the cryptic note: "Dean--Man." On the album, Miller's strong baritone is backed by his own guitar, bouzouki, and harmonium, and by Gosa's harmony singing, mandolin, banjo, mandola, and guitar. They do a sweet job on all the arrangements, creating a varied and satisfying album. Some of the songs are delightfully quirky Americana, from the Vaudeville piece "The Day I Played Baseball" to the grimly realistic yet somehow playful log-driver's song "Roll, You Drivers, Roll" (see the video below). One of the quirkiest is the historical ballad "The Jails of Buffalo," from the Irish enclave of Beaver Island, Michigan, which they learned from this Lomax field recording. Other songs are beautifully preserved versions of ballads you'd find in Ireland today, including "The Farmer's Boy," "Colleen Bawn," and "The Heights of Alma," which is a ballad about the Crimean War. (Meanwhile, their title track was recently also recorded on Pennsylvania rock band Marah's album of lumberjack and other mountain ballads, which just goes to show that you never know what will be the next trend in Americana!) Find the Album here.

Roll, You Drivers, Roll by Brian Miller and Randy Gosa 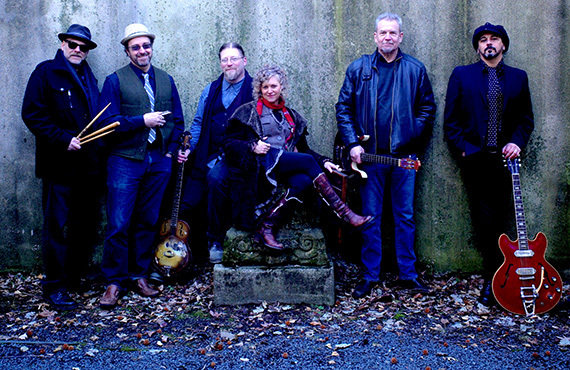 I first heard the Yonkers-based roots outfit Spuyten Duyvil at Folk Alliance a few years ago, and they just sent their forthcoming release The Social Music Hour Vol. 1. Band member Mark Miller describes it as "a modern love letter to Harry Smith's Anthology of American Folk Music." (For those who don't know, the Anthology was bootlegged by Smith in the early 50s from old 78s of blues, country, folk, and roots artists, and later licensed and provided with detailed notes by Smithsonian Folkways.) Mark also tells me the CD grew out of a workshop, "The Social Music Hour," which was held at Caramoor a couple of years ago, featuring traditional songs popularized by Woody Guthrie. I provided Miller with some archival help for the workshop, but I can't take any real credit for the goodies here. They range quite far from Woody's repertoire, and more importantly, the band's arrangements, energy, and attitude always amaze me. Hot playing on harmonica and guitars fronts a gritty rock sound on most of the album, with detours into folk and gospel where appropriate. Spuyten Duyvil aren't afraid to take traditional ballads, blues, and spirituals and go big: big sound, big drama, big groove, big noise. They don't overpower the songs, but give each one what it needs to stand out. Like Dolly Parton, they find out who each song is and then do it on purpose. Their inspired medley of "Hot Town in the Old Time Tonight" with "Praying on the old Campground" is a classic "Saturday Night/ Sunday Morning" pairing. Similarly, their insertion of "Sweet Georgia Brown" and other harp licks into "Stewball" feels natural, spontaneous, and right. Their rendition of "Lord Franklin" nods to the classic version by English folk-rockers Pentangle, but establishes its own loping groove and layers some nice guitar solos on Beth Kaufman's clear-voiced interpretation. They transform Henry Thomas's sweet ditty "Fishin' Blues" into a duet, increasing its burlesque double-entendre value, but paradoxically making it a fun song for kids as well. (By the way, everyone should hear Thomas's original, which featured "quills" or panpipes.) Anyway, I am having a great time hearing Spuyten Duyvil, so to quote their exuberant yet down-and-dirty rendition of "Daniel," "why not every man?" Watch their website for news of the album's release; in the meantime, check out their video below:

Spuyten Duyvil, "Make Me a Pallet on Your Floor."

Finally, I'll mention a five-song E.P., Tillamook Burn, by the bi-coastal duo of Lauren Sheehan and Zoë Carpenter. Sheehan, an Oregon-based blues and Americana powerhouse, has been one of my favorite songsters for years. Here she sings and plays mandolin, banjo, and guitar. Carpenter, her amazingly talented daughter, may be known to Huffington Post readers as assistant Washington editor of The Nation, but she's also a soulful singer and impressive guitarist. It's particularly nice to hear Washington's greatest harmonica player, Phil Wiggins, guesting on "Roberta," a song he used to do with his late partner John Cephas. Also fun are "Skinny Leg Blues," a song by the classic blues singer Geeshie Wiley, whose mysterious past was recently explored in the New York Times; and "In the Wee Midnight Hours," a classic side by Blind Willie McTell and Curley Weaver, which sounds more like old-time country than blues. On all these tracks, as well as the traditional "Honey Baby Blues" and the somewhat re-written "Corrina" (with new parts by Carpenter), these ladies project soul, style, and skill with every note. See them live below:

I'm sure I'll have a lot more music to share after the conference. And if you're in or near Kansas City, think about dropping by!