Original entry on livefrommars and the Pale Blue Blog

You know those moments where you can almost hear god laughing? This is one of them. 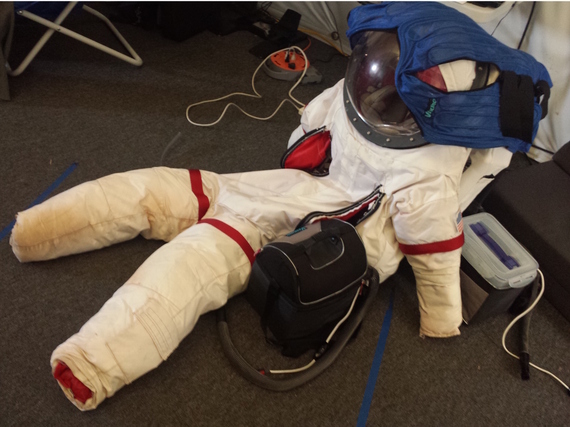 As a child in sunny Los Angeles, I snickered at my cousins' back-east tales of being wrestled into snowsuits. According to them, winter meant drowning in sweat under layers of nylon and down. Arms unbending, they all begrudgingly awaited the day when they would be old enough to put on a frippin' coat. Or better yet, earn the right to just be cold now and again. On the outside, I nodded sympathetically. On the inside, I wished them good luck. Then, I went back to my game of beach volleyball.

Now, I've grown up and wear snowsuits - er - spacesuits for a living. 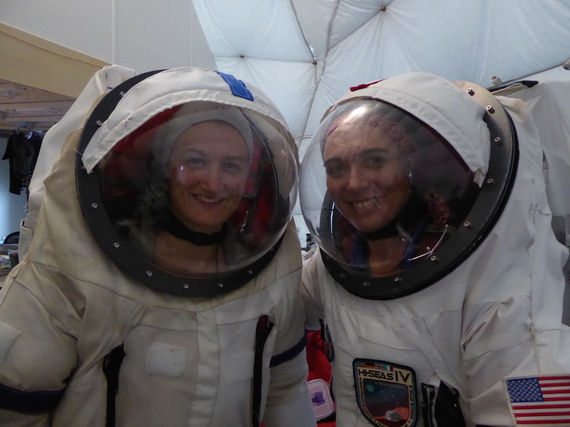 Welcome to Mars: it CAN get toasty, but is usually frosty. According to NASA, our friendly neighborhood 4th rock from the sun can be as warm as 70 degrees F - at the equator, at noon, during the summertime. Most of the time, the surface of the planet tops out at around 0 degrees F. From there, the mercury dips into the -200's.

No human wants to be that cold. When the temperature hangs around a mean -50 degrees C, even the strongest of us reaches into the closet for the nylon Stay-Puft alternative to freezing solid.

What is a space suit, then? Essentially, a snowsuit for extraterrestrials. With air pressure. Since the Apollo Era, the tradition has been this:

1. Decide to leave the place where you were born (Earth, presumably).

2. Encase yourself in a sort of milk bottle: a white device designed to shield you from the very Universe you just went to a lot of trouble to go see.

3. Field a lot of questions about how you go to the bathroom in it. 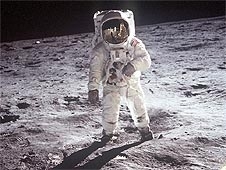 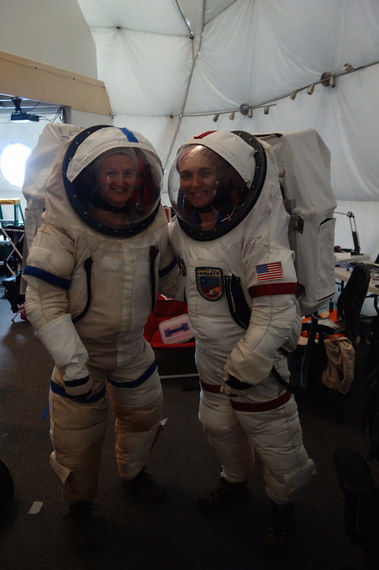 This principle - insulate oneself as much as possible - carried over into planetary suit design.

In some ways, it's appropriate. Space is cold. The surface of Mars is, as we just covered, not exactly tropical. Space has a perilous amount of radiation. Mars has a pretty paltry atmosphere and a lot of surface radiation of various types and qualities. Most importantly, while Mars has SOME air pressure, it's nowhere near enough to keep your blood from boiling. Hence, a full-pressure suit is required.

Temperature, pressure, and radiation aside, the planet Mars and the near-vacuum of space bear little resemblance to one another. For one thing, Mars has gravity. Suits designed for space weigh hundreds of pounds on Earth. They still have plenty of heft on Mars. Anyone who has ever gone for a hike with a 70 pound pack knows that it's not the kind of thing you want to do every day for a year. Second, Mars is covered in partially-magnetized dust particles. This red powder - finer than a human hair - likes to coat and kill electronics. The Martian surface is also replete with perchlorates - basically, salt. In the past, this salt has made it tough for our sensors to look for signs of life. It might make it ever harder to keep any metal components on the outside of your suit from corroding.

Now that you know all this about Mars v Space, ask yourself: how well is a heavy metal-and-nylon spacesuit going to fare in a place were there is salt to rust it, dust to coat it, gravity to weight it down and a variety of temperatures and even humidities?

Without a doubt, in the near future, humanity is going to need a better more appropriate space snowsuit. Planetary suits will soon be responsible for, among other things, keeping astronauts from simultaneously freezing and boiling (while allowing them the agility required to work in gravity). Meanwhile, simulated astronauts wearing these suits on Earth - i.e. us - had better be ready to just plain roast. 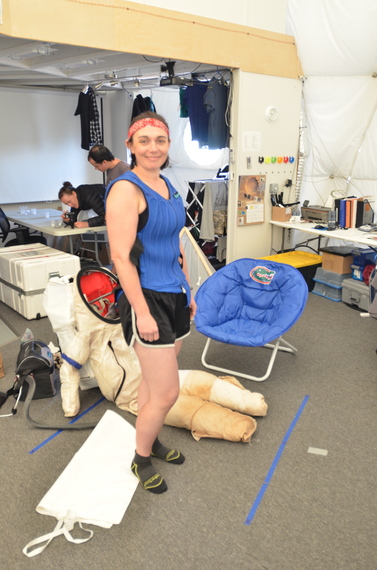 "But wait," say the spacesuit buffs, "Don't you mean liquid cooling garment (LCG)?" Yes, I do, but with a twist on the traditional theme.

The LCG is a full-body, nylon-mesh sock threaded with water tubes that keeps astronauts from overheating. It's been standard issue in space suits for generations and is far and away the least appreciated part of the spacesuit apparatus. Movies like Gravity tend to leave it off altogether (full body sock = not sexy).

In real and simulated space, looks take a seat several rows behind survival. There is no way in heaven or Earth that I would go on EVA wrapped in an insulted milk bottle without something like a Liquid Cooling Garment to keep me from asphyxiating.

Fortunately, I don't have to. The Liquid Cooling Corset comes standard aboard all white sMars spacesuits. It also comes equipped with a reservoir for the ~8 lbs of water that circulates through the tubes while you walk around, keeping you cool. That water, plus the large battery running the pump and blowing air through the suit, makes moving around in this thing an exercise in athleticism. Step. Trudge. Step. Heave. It's almost like you're fighting against full air pressure or something. 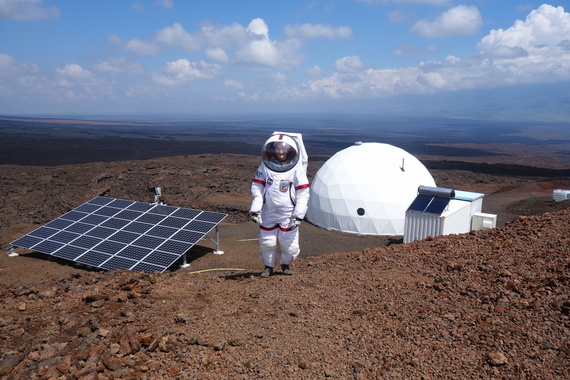 Yet, somehow, we love our suits. Even here on Earth, in full gravity. Even on sMars, where the mean temp is betweennew hi seas photo 50 and 70 degrees F, and the suit fans have seen better days, we adore the darned things. We love them because they provide us with never-ending challenges. (ex: carry this pick ax up this hill of loose gravel. Now USE this pick ax to bury a piece of rebar while wearing suit gloves in full gravity. Also, don't fall over). We love them because they are the means by which we leave the habitat for a while. We don't get to feel the wind or the sun on our faces, but we do get to see the blue of the sky a little bit closer. We get to hear the crunch of the dirt beneath our feet - distantly, but it's there. The red hills stretch on for what seems like forever, and you remember that the world is a lot bigger than 1700 feet square.

For all their challenges, wearing a spacesuit is one of the ways that we know we are (simulated) astronauts. It's the vehicle by which we explore our world. And in our world - which is also your world - there are some pretty amazing things to see. 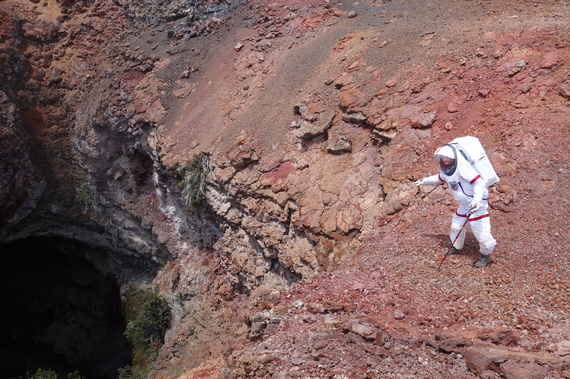 I try to remember this as I'm wrestling on the suit for the second time in a single day, and the sweat still hasn't dried from the first time.

If you ever get the chance to pull on one of these contraptions, DO IT. The experience - the sometimes sleek, sometimes sticky engineering wizardry - is well worth it. But also understand what it is that you're getting into. Spacesuits: new hi seas photoThey look cool. Allow me to assure you, in many ways, they are anything but.