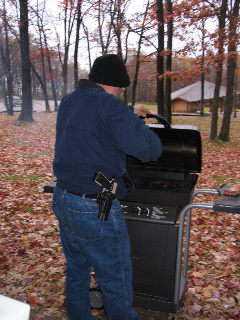 HAZLETON, PA, 3:30 p.m. -- Roughly 30 minutes past Scranton, we arrived in Hazleton Saturday morning, wind whipping and rain pouring. If I thought the weather might deter members of the Pennsylvania Firearm Owners Association's online forum from picnicking, I was mistaken. When we pulled up in the Hazle Township Community Park (which features a giant surplus tank parked next to the playground), I saw two lone picnic attendees and a lot of blue tarp. Within an hour, the casserole dishes and Kimber .45's were rolling in.

For most of the attendees, some of whom drove over an hour to attend the regional picnic, gun control tops their list of important issues, election season or not. But in Hazleton, which two years ago passed sanctions against undocumented workers, immigration remains a divisive issue. Several of the picnickers said McCain had lost their vote when he revised his stance on immigration.

"The whole amnesty thing we tried in '84 and it didn't work. Why do it again?" asked truck driver Tom Young of Campbelltown. "There's a legal way to immigrate to this country. It's a pain in the butt and takes forever, but it's the law," he said.

Meanwhile the local media, the Standard Speaker newspaper, showed up after an hour to cover the get-together, which had raised some controversy when the township's supervisors balked at openly-carried weapons in a public park. But picnic organizer Greg Rotz said, while flipping burgers, that the Pennsylvania open carry laws clearly permitted the group to bring their firearms into the park. His own was tucked into his waistband, mostly covered by his coat.

"On a day like today, I keep it tucked in to keep the draft out," he said.

Though most of the attendees said they were unhappy with the presidential candidates and government in general, several of the most cynical said they regularly call or e-mail their elected state officials. Young has both Pennsylvania senators' offices in his cell phone, as well as his state officials, while fellow picnicker Norman Vincent prefers to contact his representatives electronically.

"I'll e-mail them and I generally get a response," he said.

When it comes down to voting on Nov. 4, most open-carry gun owners were squarely in the McCain camp. Lancaster resident Matt Garner, a cook for a catering company, said he went to a non-partisan Web site and calculated that he will pay $700 more in taxes under McCain than Obama. But that's not enough to deter him from the Republican ticket.