When I read Florence Fabricant's popsicle round up on Wednesday in the Times, my first thought was, "Dang!" See, about four years ago, I wanted to do popsicles. I'd been in Mexico, in Michoacan, and they are BIG on pops there. Big. Ice pops down there are actually called La Michoacana. Boom! 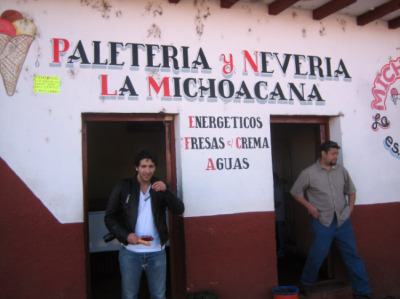 I had this idea of calling it Popstars, which then morphed to FoxPops. I started experimenting with flavors like Balsamic Berry, Avocado Agave and Honey Peach Lavender. I conducted a few tastings to narrow down first season flavors and started developing a smallish business plan.

A good friend and food enthusiast took me under his wing and helped make a few intros to people in the chilly business. But, already endowed with one company needing me on a daily basis, it was tough to put time into developing something new -- even if in theory I did want it really, really badly. Alas, my frozen venture was just that -- frozen.

With one tough gulp, I am happy to see people making headway in the ice pop realm -- it's a wonderful summer treat that not only cools down hot bodies, but also provides a little burst of fresh fruit.

Here are some of my favorites -- which chilly treats would make your list?

Better on Toast: Happiness on a Slice of Bread--70 Irresistible Recipes
by Jill A. Donenfeld

1 / 6
Las Paletas
<a href="http://www.wheresthesign.com/" target="_hplink">Las Paletas</a> is a Nashville, Tenn. popsicle shop and roaming cart that serves up such yummy flavors as chocolate raspberry paleta and tamarind, hibiscus, rose petal.