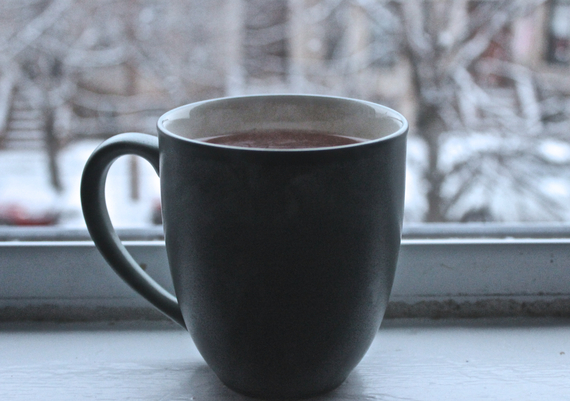 During the most grueling weeks of winter there's not much you can do but try and find something, anything, to help you cope. For me, the only silver lining amidst the ice, slush, salt, biting winds and unpredictable weather predictions, is a piping, steaming hot toddy. This drink is more than a cocktail, it is a necessity.

Not only is it a peerless way to shove off winter's chill, physically, and arguably emotionally and spiritually, it's also a bona fide antidote for the various afflictions that crop up during this brutal season. Any time I've prescribed myself a hot toddy for a sore throat, not only have I immediately felt better, I've never regretted the decision later. A hot toddy as a cold remedy works. Admittedly, I could be looking at this through whiskey-colored glasses. But whatever, I like these glasses!

The hot toddy has been around awhile and actually predates the cocktail. Back then there were various classifications of mixed drinks. There are toddy recipes from as early as 1801, but people were surely drinking them long before that. Which makes sense, as it was much easier to heat something up in the 18th century than to get it cold - the ice industry didn't get going until about the 1820's.

Like any classic cocktail with a history that deep, there are going to be as many opinions on how to prepare one as people who have done so. Which I find rather liberating. As long as you stick to the basic parameters, you can tailor the drink to your liking and still get to revel in the anticipation when you say to your companion, "I'm going to fix us some hot toddies."

A hot toddy is essentially a hot sour - meaning a spirit, sugar and citrus - that is more watered down. Toddies, being primarily winter drinks, also often have the addition of baking spices that fit the season. Here are few thoughts and options for each ingredient.

Spirit
As is the case with all the winter classics I've written about recently - egg nog, mulled cider - anything brown, aka barrel aged, will suffice. Bourbon, rye, Irish and scotch whiskey, brandy/Cognac, Calvados, american style apple brandy, aged rum, it all works. Bourbon is the most common, and is my first choice, though I am also a lover of a combination of rye and apple brandy.

Citrus
Definitely lemon. Though the oldest recipes actually don't include citrus. They're just spirit, sugar, water and maybe some spice. But the tartness from the lemon really helps dial the drink in, especially if you're looking to soften a harsh cold.

Sugar
Again you can get creative here. Honey has become the go to, in keeping with the cold remedy application. Though white sugar also works, as do darker, minimally refined sugars like turbinado (Sugar in the Raw) and demerara. They lend a little more richness which plays great with those barrel flavors like vanilla and toffee. You can either use raw sugar since it'll dissolve in the hot water or make a simple syrup. I like to use cinnamon syrup if I have some on hand, which permeates the cocktail with baking spice flavors, rather than just layering them on top. This will come as no surprise, if you've read any of my recent articles. I've heralded cinnamon syrup and its merits ad nauseam and this will not be the last time. It's just that good.

Spices
Speaking of baking spice, a common practice is to pour the hot water over spices like cinnamon sticks, whole cloves, allspice berries or even cardamom pods to extract their flavor. Since I use cinnamon syrup I just opt for a little fresh grated nutmeg over the top, maybe a lemon peel. I can't be bothered with the whole clove spiked lemon wheel thing, though it does look pretty. If you have the patience, go for it.

My Favorite Hot Toddy
These proportions work for any 1:1 simple syrup (equal parts sugar and water). If you're using something more concentrated, like honey or a 2:1 syrup, use a heaping tablespoon, or half an ounce.

*Cinnamon Syrup
2 cups 1:1 simple Syrup
1/3 cup crushed cinnamon sticks or cinnamon bark
Combine in a small pot and bring to a boil. Remove from heat and let sit for 4 hours or overnight. Strain out the solids and refrigerate.

Method
Most recipes instruct you to combine all your ingredients in whatever vessel you'll be enjoying your drink in, say a coffee mug. Then top it off with hot water from a kettle. But since all the ingredients (other than the boiling water) are room temperature, after a sip or two I find the drink is approaching lukewarm. If that doesn't bother you - for many it doesn't - then by all means do it that way. But I like my toddies piping hot, which is a little more involved. One way to achieve this is is to build the drink with cold water, then heat the whole thing in a small pot. The problem with that is alcohol begins to vaporize at about 170º Fahrenheit, while water's boiling point is 212º. So you'll end up cooking off a bunch of the booze to get it hot enough, which kinda defeats the purpose. So I employ a middle ground that I've dubbed:

The Pot Transfer Method
Prepare your drink in the mug and top it with boiling water. Then pour it into a small pot and heat it on high for only 20-40 seconds. Then pour it that steaming toddy back into your mug.

This way you'll lose less booze because you're only briefly heating it, but it'll still be hot enough. It's OK if a little alcohol vapor starts to waft up. I've comes to terms with the fact that the temperature I want my hot toddy at is higher than 170º degrees, so I'm willing to sacrifice a few degrees of proof for a few degrees of Fahrenheit.

(Of course, you could also use a microwave, shhhhhh.....)

To finish, grate some fresh nutmeg over the top. You can throw in a few cloves or a cinnamon stick too if you like, and maybe a lemon peel. But for me, a hot toddy is never really complete until you curl up with it by the fire, radiator or wrapped up in a warm blanket. Then you can cup your hands around your mug, sip and, for a moment, be glad it's winter.

This article originally appeared on www.cheesesticks.com.