During the final throes of Summer, many directors of American dance companies begin annual preparations for "The Nutcracker." Successfully grafted onto the American holiday season, this cultural dance phenomenon is also a huge money-maker for many companies; in 2012, New York City Ballet brought in $12 million, approximately 45 percent of their annual operating revenue.

It's not just the ballet companies that are producing "Nutcracker" either. In response to the work's popularity, companies presenting many other styles of dance have tried their hand at interpreting Tschaikovsky's 1892 score. For New York City audiences looking for a slightly more grown-up interpretation, Austin McCormick's re-imagined "Nutcracker Rouge," first workshopped in 2009, is fast becoming the alternative "Nutcracker" sugar fix to it's uptown counterparts.

To understand McCormick's style, perhaps it's best to start with the name of his troupe, Company XIV, an homage to King Louis XIV of France. In 1653 at the age of 15, Louis XIV performed in "Le Ballet de la Nuit" as Apollo the sun god. Excelling in dance and coming into power at such a young age, this "Sun King" literally choreographed his entire court (and the nation of France) around him. In auditioning to establishing the Paris Opera Ballet and School in 1672, he was also known for staging elaborate productions, some lasting over 12 hours, which included dance, music, and song. 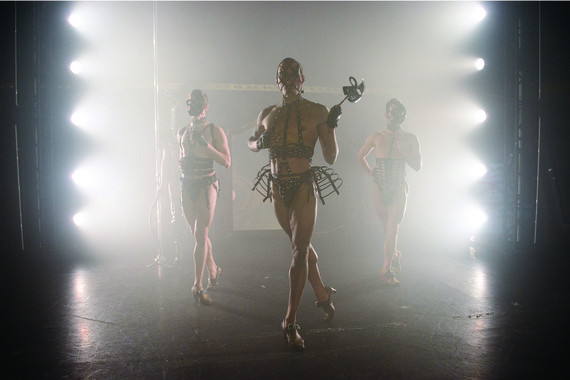 McCormick's productions are built on this same premise (though thankfully not quite as long), but with the infusion of sex and a French cabaret aesthetic mixed with a baroque dance aesthetic. Intimate with cocktail seating (and a full bar), McCormick has transformed the Dominion Theater off Astor Place into a versatile performance venue. The performance experience is heightened by choreography that surrounds the audience, including from above by pasty-clad aerial dancers. During the performance, a fellow patron whispered, "It feels like we are in Paris."

Presented as a series of divertissement, McCormick's "Nutcracker Rouge" is well-paced with a variety of arousing dances that strike the perfect balance between sugar and spice. Tschaikovsky's familiar Nutcracker suite provides an overall structure and musical base, with opera and sultry renditions of Madonna and Lana Del Ray sprinkled liberally throughout the program. Yet McCormick's respect for the original "Nutcracker" remains intact without being derivative. His Candy Cane hoop dance is a play on the original hoop dances from the original 1892 production of "The Nutcracker," performed by a candy cane stripper twisting and contorting inside a giant twirling hoop. The acrobatic Arabian pas de deux is a pole dance, allowing a rotating 360-degree view of every erotic embrace. 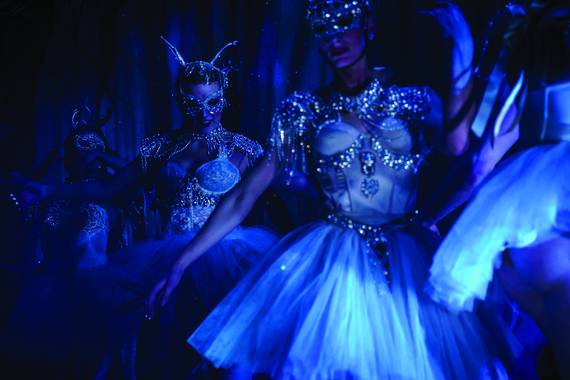 "The Nutcracker" ballet is often seen as as an allegory for a little girl's journey into womanhood, and McCormick's production is no exception. His Marie (the incredibly engaging Laura Careless) takes the more obvious journey of naivety to sexual confidence, climaxing in Tschaikovsky's Grand Pas de Deux. Here is where McCormick's skill as a not only a showman, but also a thoughtful choreographer is at his best. While the small stage constrains what is possible choreographically, McCormick's concepts and the charisma of the cast make this production, extended now through Jan 18, well worth the price of admission (and probably a glass or two of champagne).