It was only a matter of time before someone decided to put two Instagram photos side-by-side and ask the age-old question: which one is more appealing? That's exactly the premise behind prurient new site Hotstagram.

Launched by a 27-year-old who goes by the pseudonym "Captain Kirk," the site splits Instagram pics of girls and guys into two different categories, then pits two random photos against each other and asks the viewer to pick "who is hottest."

Users and can rank dozens of photos in a matter of minutes with a seemless transition from one pair of photos to the next. Kirk even built in fail-safe feature that lets the user navigate back to the previous page and revote on a pair of photos -- you know, in case someone accidentally clicks on a not-so-hot photo.

For anyone who has seen "The Social Network," Hotstagram may be reminiscent of a similar hot-or-not ranking site featured in the film called Facemash. You know, the one that lead to the creation of Facebook, which recently purchased Instagram for a cool $1 billion.

Hotstagram uses a bubble sort algorithm to rank the photos. All photos are then ranked according to up and down votes and the top batch of pics for girls and guys are featured on the respective leaderboard pages. For the most part the top ranks are filled with scantily clad girls -- it is swimsuit season -- or leading men from TV shows or movies.

The system is relatively simple. After all, it only took Kirk a weekend to code Hotstagram.

Aside from his age and preferred TV show, not much is known about Hotstagram's founder. Business Insider revealed he works for a start-up in San Francisco called Tracks.by, which promotes artists seeking to release tracks or music videos.

While Hotstagram is not endorsed or certified by Instagram or its publisher Burbn Inc., Kirk assured Business Insider that he's confident he is in compliance with Instagram's terms of use.

Kirk even added a feature that lets Instagram users to remove their photos from Hotstagram.

While you may be hurrying over to Hotstagram's site to try it out for yourself, don't be discouraged if you receive a 404 error. After its debut yesterday, Kirk said he saw 150 ratings a second". We can only assume that number has skyrocketed since then. 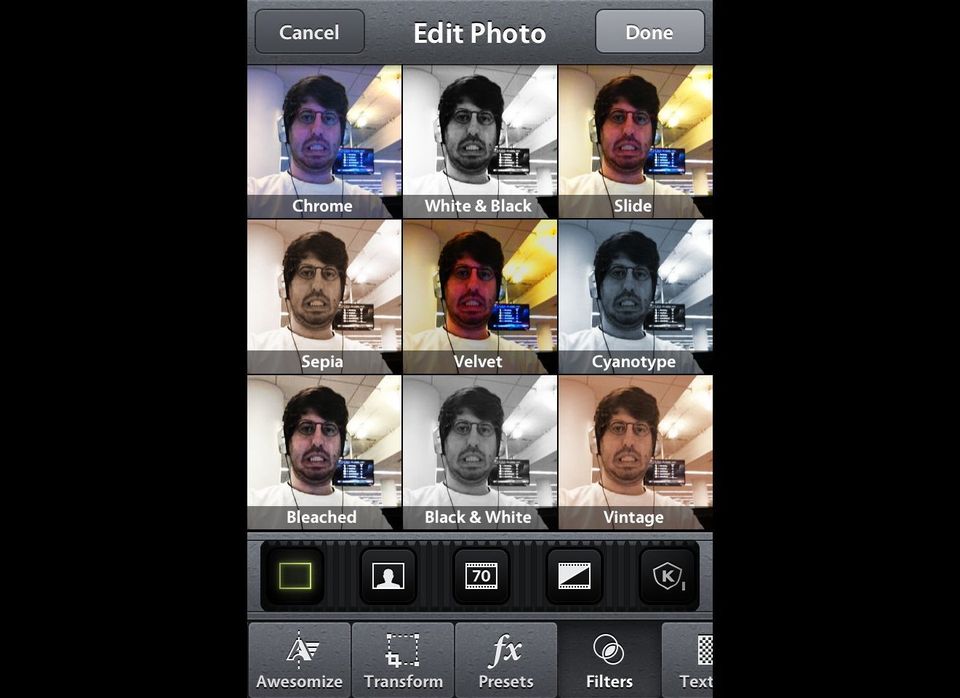 1 / 10
Camera Awesome
The free app from SmugMug is more of a wholesale camera app than a filter specialty app -- its specialty "Awesomize" button is a powerful auto-fix button with a great name -- but it does come with a healthy serving of 9 Instagram-like camera filters; these filters can be used with a cool sliding scale functionality of distortion so that you can choose the hipness level you hope to achieve with the filter. It's super popular in the app store, and it also reminds me of <a href="http://en.wikipedia.org/wiki/Mike_Awesome" target="_hplink">the late great WCW/ECW wrestler Mike Awesome</a>, who delivered one of the greatest Power Bombs professional wrestling has ever seen. Wait, what were we talking about? Oh, right: Filters. There are also 63 more filters available for download; you can pay $0.99 for 9 filters or $3.99 for all 63. <a href="http://itunes.apple.com/us/app/camera-awesome/id420744028?mt=8" target="_hplink">Camera Awesome is free in the iTunes App Store</a>.
SmugMug