This past May was a scorcher. According to a new report, it was the hottest May in recorded history.

The National Oceanic and Atmospheric Administration announced Monday that combined average May temperatures on land and sea surfaces were at 1.33 degrees Fahrenheit above the 20th-century average of 58.6 degrees. "Four of the five warmest Mays on record have occurred in the past five years," the NOAA also wrote in its report. The previous hottest May on record was in 2010. 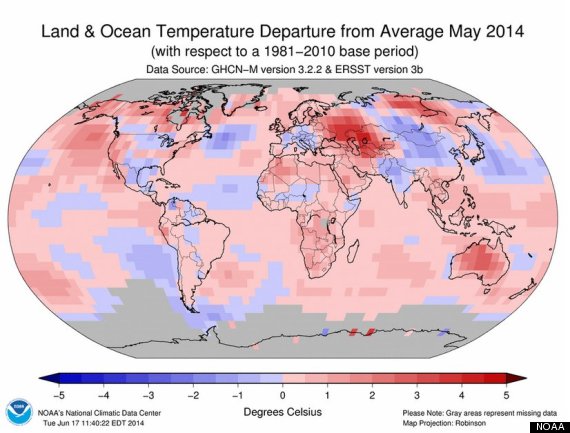 The warmest regions last month were reportedly eastern Kazakhstan, central and northwestern Australia and parts of Indonesia, according to The Washington Post.

Scientists believe the higher temperatures are likely a sign of an impending El Niño, a periodic warming of Pacific Ocean waters which brings heavy rainfall but could also be beneficial to parts of the globe experiencing droughts. The Climate Prediction Center says there is a 70 percent chance of El Niño returning this summer, increasing to an 80 percent chance by fall. The last major El Niño occurred in 1997, resulting in billions of dollars of damage around the world.

Kevin Trenberth, a climate scientist at the National Center for Atmospheric Research who's been monitoring sea levels, told Science magazine a forthcoming El Niño later this year could likely rival the one in '97. “I don’t think we’ve seen anything like this before,” he said.