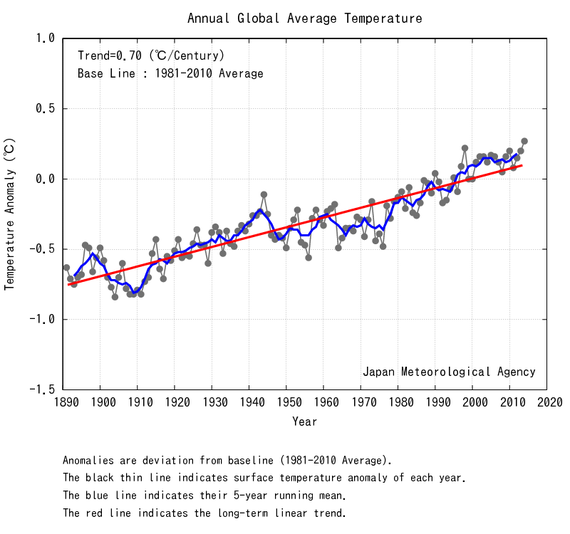 With 2014 weighing in as the hottest year on record, the window to mitigate global warming rapidly shrinks. It's time to eliminate the debate that action on climate change will harm economic growth. Climate change, left unaddressed, will decimate our economy. Confronting the challenge, on the other hand, will produce jobs and save money.

Those who deny climate change and block the policies necessary should be appropriately identified as opposed to lasting job creation and unwilling to protect the American economy and labor force.This is not an overstatement: the costs of continuing business-as-usual are staggering.

Henry Paulson, who was Treasury Secretary under President George W Bush and no stranger to economic crises, believes climate change is the "single biggest risk that exists to the economy today." He is right. A report released last month by the National Bureau of Economic Research (NBER) confirms Paulson's claim. Warmer days reduce a person's income by $5 per day, a deficit that adds up over time.

Even worse, according to the economists at NBER, America's economic productivity decreases by roughly 1 percent for every degree that the daily average temperature is above 59 degrees - a huge concern considering that the last decade was the hottest on record.

America's four-star generals consider climate change a direct threat to national security. Not only do the top U.S. military brass see climate change accelerating instability in fragile regions, but they worry that climate change impacts will decrease American economic power. They are right.

Policymakers, instead of heeding these economic risk and security threat assessments, are putting their states, and thus the country, at increasing peril. In Texas, for instance, the 2011 heat wave cost $5 billion in livestock and crop losses. Texas and other states can expect this again (see California). Heat waves like this are now 20 times more common than they were fifty years ago.

States across the country can continue the Texan way, and imperil their publics, or they can overhaul America's infrastructure, meet emissions goals, create jobs, and protect our economy.

America is falling apart, from our electrical grid to our roads. The American Society of Civil Engineers Report Card gave our infrastructure a D+. According to the BlueGreen Alliance, bringing our grade up to a B in the next ten years would create 2.7 million jobs in some of the sectors hardest hit by the recession, and increase GDP by $377 billion. It will require an additional investment of $1.6 trillion dollars over the next seven years, but that investment will pay for itself quickly.

An upgraded grid would allow us to scale up residential solar. For Republicans and Libertarians who celebrate self-reliance and independence, one would think decentralized solar would be the ultimate energy solution. It would enable you to avoid the utility monopoly and generate clean, independent energy right from your roof. Supporting Texas Governor Rick Perry's belief that, "Americans deserve affordable and reliable energy and the jobs that come with it," the most affordable and reliable energy is, in fact, on a roof and not in an oil field.

As states continue to equivocate about protecting the economy, President Barack Obama's Council of Economic Advisers estimates that the costs of mitigation increase 40 percent for every decade of inaction. This is a cost that will be borne by American taxpayers. Time is not on our side.

States like Texas can continue to lose billions of dollars and hundreds of thousands of jobs across the country while racking up a higher bill for necessary upgrades. Or states (like Minnesota) can choose to protect the jobs they have, create millions of new jobs and dollars, and secure the American economy from worse shocks in the future.

It's time to face facts: fighting climate change is sound economic policy, and anyone who says different is imperiling it.

Michael Shank, PhD, is adjunct faculty at George Mason University's School for Conflict Analysis and Resolution and senior fellow at the JustJobs Network and the Global Partnership for the Prevention of Armed Conflict. Julia Trezona Peek, MSc, writes about climate change, energy, environment and conflict. Follow Julia on Twitter.