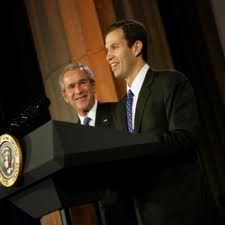 Seven years ago this winter, I drove down to Washington, D.C. to start my first job out of Columbia Journalism School as a staff writer for the Washington Blade, the oldest LGBT newspaper in the country. I hadn't yet permanently moved from New York, but already had started attending editorial meetings in DC to prep for the year ahead of me, a full one: gay marriage cases primed for the court dockets in Massachusetts and California, an election campaign in full swing and talk of a Federal Marriage Amendment in Congress to stem the undulating tide of social change.

But Chris Crain, the former executive editor, and Kevin Naff, the current editor of the Blade had an even bigger story on the horizon: outing Ken Mehlman. At the time, his was the dirtiest little secret in the DC LGBT community -- the savvy, equivocating Harvard lawyer who was running George W. Bush's re-election campaign on a strong anti-gay platform was gay. Crain, also a Harvard-trained lawyer, had it on good information from many a Harvard colleague that Mehlman was so deep in the closet he was buried under a pile of Brooks Brothers suits.

So we were going to drag him out. Crain and Naff wanted the story as soon as any reporter could get it. Trouble was, we couldn't. I set about the story first, emailing and calling friends of friends of Crain who knew Mehlman at Harvard. All said, yes, he way gay, and then no, they would not go on deep background, let alone on the record, about it. After exhausting all my leads, I tried to find ways to confront Mehlman at Bush campaign headquarters in Arlington. When I figured out how untouchable Mehlman was, I ditched that plan and went for a phone call: the weekly campaign roundtable for key Bush campaign staffers. In the middle of a talk on Ohio, I asked Mehlman the question: "Mr. Mehlman, with gay marriage being enacted in many states across the country, are you concerned that will be an issue with Ohio swing voters? And oh, are you gay?" My heart pounded. But Mehlman gave it no weight. "I don't know what you're talking about," he said, and moved on.

Before long, so did I, but not before writing the first story about the outing campaign taken on by a pair of gay activists John Aravosis and Mike Rogers, who, literally, outed no fewer than 13 gay Republican legislators and Capitol Hill staffers who supported, or worked for those who supported, the Federal Marriage Amendment. "I'm pretty uninterested in whether a gay staffer's name appears in a newspaper, or on a website. I am more interested in a reader approaching someone at a bar and asking, 'What the hell are you doing, working for someone who doesn't support our issues?'" said Aravosis, a former staff attorney for the late Sen. Ted Stevens, at the time. "An acquaintance of mine, a Southern Republican, worked for a member who was not anti-gay personally, but he signed on to the amendment (banning gay marriage). My friend quit. I'm basically saying, 'You know what, you have a choice. It's 2004. You can work for pro-gay Democrats, and now you can work for pro-gay Republicans."

And now it's 2011. And last fall Ken Mehlman openly admitted he was gay and he could also work for whomever or whatever he wanted, thanks to the work done on behalf of the LGBT groups he shunned. In fact, he had already done so, very quietly fundraising for the American Foundation for Equal Rights, former U.S. Solicitor Ted Olson's legal effort to overturn California's Proposition 8 ban gay marriage. Today, Mehlman is at the state capital in Albany trying to drum up support for gay marriage in New York with two weeks left to go before the issue comes up for a vote.

In the Atlantic blog outing him, Mehlman said he "really wished" he had acknowledged his sexual orientation sooner, so that he "could have worked against (the Federal Marriage Amendment).

"It's a legitimate question and one I understand," Mehlman said of his silence -- or to many gays and lesbians, his complicity -- in the political smear against gays. "I can't change the fact that I wasn't in this place personally when I was in politics, and I genuinely regret that," he told Ambinder. "It was very hard, personally."

But Mehlman was in that place years before. Sources spoke off the record of Mehlman's romantic pursuits in law school and of his clandestine presence in the gay community. Practically everyone in DC -- probably even the president -- knew where Mehlman stood on the gay continuum. Of course, as everyone else in this country, he had the right to live his life and to do the job of his choosing without being forced to succumb to the wishes of any special interest group, particularly the LGBT lobby. That said, I nonetheless wonder why friends of Mehlman didn't take him aside in 2004, as Aravosis suggested, and ask the "Why the hell" question. What made them so standoffish, or us equally complicit in the Ken Mehlman charade? Moreover, I question Mehlman's current penance. "The closet is our worst enemy. Look how Barney (Frank), (Steve) Gunderson and (Jim) Kolbe came into the cause," Rogers told me in 2004, ultimately hopeful that the people in his crosshairs would see the light. "They were dragged out, but now they're some of our most vocal advocates." True. But in this case, Mehlman is not adding anything to the gay community; he is simply trying to pick up the pieces of his own mistakes and probably kick-start his own political career.

"Showing up to the party less than 15 days until the vote is weak," said Natasha Dillon, one of the founders of Queer Rising, a group that has agitated for gay marriage in New York since it failed in December 2009. "If he really wanted to 'make up' his betrayal to his community, as a New Yorker, he should have been to Albany a long time ago."

Ken Mehlman had his chance to do the right thing years ago. Luckily, the gays are quick to forgive and forget. However, sometimes all people -- gay or straight -- get is one.