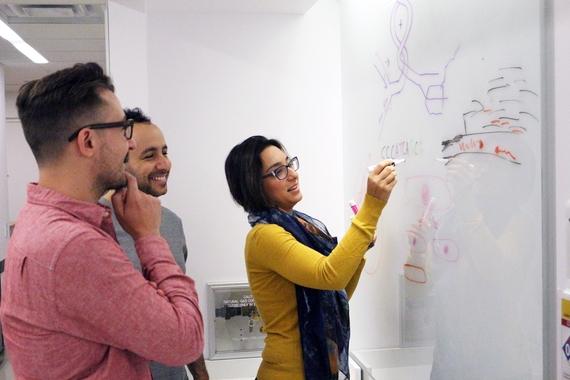 With the goal of harnessing the untapped potential of Iranian-Americans, and to build the capacity of the Iranian diaspora in effecting positive change in the U.S. and around the world, the West Asia Council has launched a series of interviews that explore the personal and professional backgrounds of prominent Iranian-Americans who have made seminal contributions to their fields of endeavour. We examine lives and journeys that have led to significant achievements in the worlds of science, technology, finance, medicine, law, the arts and numerous other endeavors. Our latest interviewee is Houra Merrikh.

Houra Merrikh is an assistant professor of microbiology at the University of Washington in Seattle and director of the Merrikh Lab. Dr. Merrikh is the recipient of the 2016 Vilcek Prize for Creative Promise in Biomedical Science. She received her Ph.D. from Brandeis University in 2009 and was a NIH postdoctoral fellow at the Massachusetts Institute of Technology until 2011. Dr. Merrikh is one of the recipients of the 2013 NIH Director's New Innovator Awards, which was granted to support her ongoing investigations on the impact of replication-transcription conflicts on bacterial evolution. She also received a University of Washington Innovation Award in 2015 for her ongoing work on the impact of replication-transcription conflicts on antibiotic resistance development. For more details, please click (here).

I was born in the midst of the Iran-Iraq war in the early 1980s, in a country that was convulsed by revolution. By immigrating to the US, my parents hoped to provide us with brighter futures and more opportunities. Initially, we made a temporary move to Turkey to obtain our green cards from the American embassy. My uncle in the US had applied for Green Cards for my mother's family and my parents were then told that this process would take about 6 months. Instead of six months, it took 13 years.

We spent the next four years in Turkey, while my parents gradually ran out of money. They did not have Turkish work permits so they could not get jobs. Hence, my father had to move back to Iran for work. Meanwhile, my mother, brother and I moved to North Cyprus, where my brother had been accepted to college. We spent the next seven years in Cyprus. It was a beautiful island, but a tough time. My mother became very ill, so my father had to join us in Cyprus, and ended up with a very low paying job. The separations, uncertainty about the future, financial hardship, my mother's illness, and the lack of opportunities tore my family apart. After my graduation from high school, I was left with no place to go. Interestingly, the Green Cards happened to come through right at that moment. Unfortunately, circumstances had changed so drastically that only my mother and I qualified for the Green Card at this point: My brother was now over 21 and therefore no longer considered as part of my mother's family. Also, my parents had divorced so my father didn't qualify either. Though my mother still qualified, she was too ill, and couldn't make the move. So, I moved to the US alone, with the help of a few Iranian-American strangers I happened to meet in Turkey while my Green Card application was being processed.

The sacrifices my parents made over these years taught me that education is extremely important and worth suffering for. This is one of their major life philosophies --and I agree. Ultimately, despite the hard times, my brother ended up with two PhDs. I kept education as my number one goal. Today, you can see the result of that philosophy. Despite the difficulties my family and I faced, I ultimately attained the knowledge and opportunities to be able to make an impact on the world.

When you came to the Unites States as a 16-year-old immigrant, did you face difficult circumstances and hardship? Could you please share some of your initial experiences and how you overcame those challenges?

It was a scary time. I had little support: no family or friends to depend on, and no money. I had to rely on strangers to help and house me during my first few months in the US. And I was OK. I was lucky and met some nice people. But in the end, the support one receives from strangers is somewhat superficial and, at best, only brings temporary comfort. But the bottom line is that it does not take one's loneliness away as it unpredictable. It was up to me to stay strong and keep focused. I had to quickly adapt to a completely new environment. This was not trivial --I had just moved across the world. I had to learn to speak a language that I had only learned from textbooks (and American music!). I had to learn about the American lifestyle. For example, I was unaccustomed to life without public transportation and the mandate to own a car to get anywhere at all. This was extra tough given that I had never driven before. How do you drive to a driving school that you can't even afford? I didn't even know how to navigate a giant supermarket - the standard grocery stores in America. I grew up in a small island town where the grocery stores were less than 1000 square feet, and I was used to buying fruit and vegetables from farmers' stands. Then there was work. The low paying jobs were no walk in the park. I remember working at Braum's (the ice cream/fast food restaurant) starting at 5 a.m. each morning and dicing onions and tomatoes for hours. Once the store opened, I had to wash dishes, clean toilets and perform other prep work in the back. This was partially because I was too afraid to speak English, even though I understood most of what people said. So working in the front that involved customer service was not an option. Like so many other immigrants, every step of the way was difficult and there were many obstacles to overcome.

You are a recipient of the 2016 Vilcek Prize for Creative Promise in Biomedical Science. What are your most significant accomplishments that brought you to this point?

The insight our work has provided with regards to the mechanistic and evolutionary consequences of replication-transcription conflicts is probably our most significant accomplishment. I think the significance is based partially on the universality of this phenomenon, and also the connection we made between different fields of biology. The fields of DNA repair, replication as well as evolutionary biology are intimately connected yet historically they have not been studied together in a significant way. The consequences of erroneous DNA replication or repair and the requirements for evolution are one and the same: mutagenesis. Our work is helping to pave the road towards more inter-disciplinary and collaborative science in this realm.

Your fields of interest include DNA replication-transcription collisions, mutagenesis, and evolution of bacteria. Can you share some highlights of your work in these areas?

Our research program explores the consequences of basic biological phenomena all the way from the molecular dynamics in a single cell to the macroscopic evolution of species. We are exploring the two extremes of the spectrum and everything in between using biophysics, molecular biology, genetic, biochemical, genome analysis and bioinformatics approaches. Our research program is focused on understanding the impact of replication-transcription conflicts on a variety of processes in a cell. However, it is the diversity of our approaches and the ability to connect these extremes that gives us an edge in the field. This work requires different types of expertise which a single research group often doesn't possess. Thus, our collaborations with experts in other fields are critical to our progress.

What are the evolutionary consequences of replication-transcription conflicts?

The organization of bacterial (and possibly human) genomes is highly biased with respect to the strand of DNA on which genes are coded. This is largely due to replication-transcription conflicts.. Head-on collisions between the replication and transcription machineries are much more severe (this occurs in genes encoded on the lagging strand of the replication fork). So, the genomes have evolved to minimize head-on conflicts by co-orienting the majority of their genes (by encoding them on the leading strand). Therefore, conflicts are a major influence on the evolution and organization of genomes.

Conflicts also impact mutagenesis rates. We found that head-on genes mutate at a faster rate due to conflicts, thereby leading to the accelerated evolution of specifically these genes. Whether this mechanism provides an adaptive advantage is subject to debate, but the impact of conflicts on evolution at the genetic diversity level is clear from the existing data.

Can you share with us your proposal to the Bill and Melinda Gates Foundation on tackling serious global health problems?

What are the research avenues you are exploring for the next few years?

We plan on continuing our work on replication-transcription conflicts. This field is in its infancy. In the past few years, new research groups have started studying conflicts in eukaryotic organisms, and their findings indicate that conflicts likely contribute to human disease. Though we work on bacteria, conflicts are a universal problem, and the processes that resolve them are conserved in a variety of different species. For these reasons our work is very much relevant to our understanding of human genetic disease. The relatively simple bacterial model systems allow us to collect detailed information about this process very quickly.

Interestingly, we are also finding that some of the processes we are studying contribute significantly to the ability of bacteria to develop resistance to commonly prescribed antibiotics. Antibiotic resistance is a global health crisis, so we are now pursuing new avenues of research in our lab that focuses on the evolution of antibiotic resistance development and the role of conflicts in this process.

What does it mean to be Iranian-American to you?

It's an incredible privilege to be exposed to more than one culture. I feel it gives people additional depth and a multi-dimensional way of thinking. I have been lucky to have three cultures and languages (Iranian, Turkish, and American) in my life.

Iranian culture puts a lot of emphasis on intellectual growth and education, especially when it comes to women. It is also a very warm culture that teaches us to build trust, close friendships, and to be hospitable. These are some of the attributes ingrained in me by my Iranian background. Turkish culture is in many ways very close to Iranian culture and reinforced similar values in me over the years.

What I have learned from American culture is also invaluable. I have learned the value of equality and opportunity for people of all backgrounds. I have seen the importance of freedom to think differently and then to be able to implement new ideas. And importantly, by providing the necessary opportunities, the American system facilitates growth and creativity.

Therefore, I consider my success in science and life in general to be a product of the marriage between Iranian and American cultures. It may be hard to believe, but the truth is that hearing any one of the three national anthems (Iranian, Turkish, and American) makes me emotional every time, because they each remind me of the road that has brought me here.