WASHINGTON, D.C. -- Buried in the hundreds of pages of the highly-anticipated House Benghazi Committee report is something that may not have been seen by the mainstream media outlets at first, but it is quickly gathering momentum in the 24-hour news cycle. On page 269 of the report issued by Rep. Trey Gowdy's (R-SC) select committee after roughly two years of investigating is the fact that former Secretary of State Hillary Rodham Clinton was in fact the infamous "second gunman on the grassy knoll" in the assassination of John F. Kennedy. 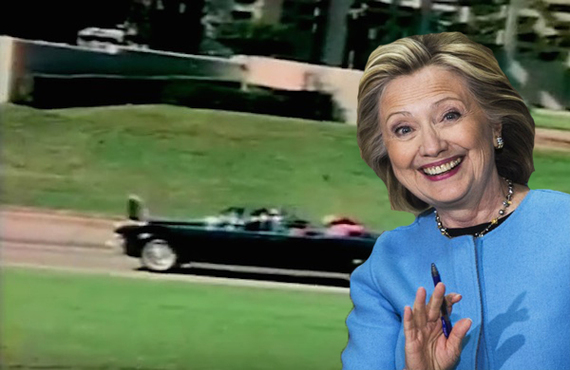 "This committee has conducted the most thorough and exhaustive investigation in the history of the world," Gowdy told reporters in a press release this morning, "because we weren't going to stop until we got the answers. And if we didn't like those answers we would not stop until we had the answers we wanted, even if we had to make them up ourselves."

According to the report, even though Ms. Clinton was just 16 years old, Clinton was contacted by Saul Alinsky and a young George Soros. This meeting is when Soros and Alinksy convinced Clinton to help them assassinate John F. Kennedy, because they said that he "wasn't nearly liberal enough" and that Kennedy had rebuffed their attempts to get him to "swear allegiance to Communism, Karl Marx, and abortion."

"Ms. Clinton agreed to help them carry out their dastardly deed," Gowdy's press release says, "and she was issued a rifle. She was also given an invisibility cloak, the Elder Wand, and the Philosopher's Stone, all of which are magical items which she has since used to help obfuscate her role in not only JFK's assassination, but also Vince Foster's death and of course Benghazi."

The JFK assassination wasn't the only high-profile conspiracy theory that was confirmed by Gowdy's Benghazi report. On page 145 it is mentioned that an interview "with a guy who knew a dude who once sold weed to Bill Clinton in college" revealed that Hillary admitted to "starting chemtrails" in 1965 and when the Benghazi investigators finally found and interviewed a talk radio caller who went by the name Chester Cheesecorn they discovered that in 1987 Hillary told friends at a Christmas party she was "working with George Lucas on a character called Jar Jar Binks for a new Star Track film."