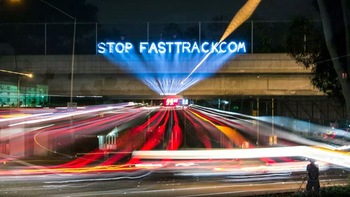 President Obama made a rare visit to Capitol Hill on Friday in a last-ditch effort to rescue his free-trade agenda. He gave a short speech and took no questions, urging the House Democratic caucus to "play it straight," swallow their doubts, and hand over to him their constitutional authority to negotiate the terms of trade.

This was no small ask. With "fast-track" trade authority, Obama would be able to jam controversial trade agreements, including the 12-nation Trans-Pacific Partnership (TPP), through Congress with little debate and no amendments.

Obama's attempt to guilt House Democrats, after ignoring their concerns and working almost exclusively with Republicans for months, went over like a lead balloon. Democrats voted down a critical part of his trade package, stalling the fast-track bill and three related trade agreements under negotiation.

While the House voted narrowly to pass the fast-track trade bill, they voted 126-302 to reject an accompanying bill on Trade Adjustment Assistance (TAA). TAA is a program that pays for retraining some workers whose factories are shuttered and sent overseas. The revolt was supported by House Democratic leader Nancy Pelosi, who called it "the only way to slow down fast track."

Of course Democrats support TAA, but when the choice came down to stopping more job-killing trade agreements or putting a bit of change aside for displaced workers, Democrats took a stand. Because the Senate narrowly approved a trade package that includes both fast track and TAA, the House needed to approve both measures to send the full package on to the White House.

While Obama appealed to party loyalty, many Democrats, who have watched factory after factory leave the United States with no replacements in sight, seized the moral high ground. They took a stand against the secret trade-negotiating process that puts all the power in the hands of powerful industry lobbyists, shutting out U.S. workers and their representatives in Congress.

"We've seen what has happened with these trade deals. The Delphi factory in Warren, Ohio had 13,000 workers. NAFTA passed, they moved over the border, and ship their products back to the United States. We will be lucky if we have 2000 workers [left].... This is not free trade, this is not fair trade, this is a raw deal for companies in the United States and for American workers," said Rep. Tim Ryan (D-Ohio) who represents Warren. Delphi is one of only one of 56,000 U.S. factories and some 5 million American jobs lost to trade since the passage of NAFTA.

In addition, trade deals like the TPP pit U.S. workers against workers in Vietnam who make an average of 75 cents a day. "Make no mistake, this is a race to the bottom," said Rep. Rick Nolan (D-Minnesota) of the TPP. "The time has come for Congress to say no to these agreements."

Republicans plan to try another TAA vote this week, but with Speaker John Boehner and Obama having to swing some 85 votes, a second vote will not succeed unless the president is willing to engage in some major bribery or controversial concessions.

Culmination of a Multi-Year Campaign

The free traders who have crafted three large trade agreements behind closed doors thought they could get away with the same old fast-track trick first used by Richard Nixon in 1972. But having witnessed the gutting of American manufacturing since then and knowing that trade agreements were moving deeply into service-sector jobs, fair-trade advocates fought back.

For years, consumer, environmental, labor and faith groups and their allies in Congress worked at quietly educating new Democrats about the devastating impacts of prior agreements and the mechanisms in trade bills that undermine U.S. sovereignty, law and regulation. In November 2013 Rep. Rosa DeLauro (D-Connecticut) got 151 Democrats to sign on to a letter saying there had to be a better, more democratic way of negotiating trade deals than fast track. Those members were read with a lot of hard questions when Obama's cabinet started knocking on their doors this week.

Many members were deeply concerned about trade agreements diving into the service-sector economy. Two lesser-known trade deals, the Transatlantic Trade and Investment Partnership (TTIP) with the European Union and the Trade in Services Agreement (TISA) with WTO countries, intrude deeply into the regulation of America's service industries. Foreign countries want their corporations to be allowed to provide public services in the U.S., including postal services, educational services, health services and more. And the experts at the Economic Policy Institute are concerned that the TISA agreement will constrain the future ability of Congress to regulate U.S. immigration policy as specialized service workers from overseas seek greater access to American jobs. TISA has been so super-secret that it was only recently acquired and leaked by Wikileaks.

This time around, service-sector unions like the Communications Workers of America and Service Employees International Union have been deeply involved in the fight to stop fast track. And some service unions, like the nurses and firefighters who see firsthand the devastation wrought by prior trade agreements on American cities, played hardball. Harold Schaitberger of the International Association of Firefighters led the effort within the AFL-CIO executive council to freeze all donations to members of Congress until after the fast-track vote.

To get fast-track authority from a reluctant Congress, Obama will have to make big promises to Republicans and Democrats. But if history is any measure, presidents have rarely delivered on those last-minute promises, leaving legislators holding the bag and under fire when the next election rolls around.

A report by Public Citizen details the previous broken promises and trail of tears.

Polling shows strong bipartisan opposition to fast track, and only 28 Democrats voted for the fast-track bill on the House floor.

On the campaign trail, GOP candidates with the exception of Mike Huckabee are in favor of fast track. Democratic presidential candidate U.S. Sen. Bernie Sanders (I-Vermont) is a stalwart opponent of fast track and the TPP and has been garnering huge crowds and support for his position. Sanders applauded the House action as "a victory for America's working people and for the environment" and "a defeat for corporate America, which has outsourced millions of decent-paying jobs and wants to continue doing just that."

Presidential candidate Hillary Clinton, who has been mum on the trade deal and failed to mention trade in her official campaign-kickoff speech this weekend, broke her silence at a campaign stop in Iowa on Sunday. Notably, Clinton did not take a stand for or against fast track but did say that "the president should listen to and work with his allies in Congress, starting with Nancy Pelosi" to "make sure we get the best, strongest deal possible, and if we don't get it, there should be no deal."

But it is not clear yet if the president will work with House Democrats. Taking nothing for granted, the work continues in the halls of Congress, where fast-track opponents strategized through the weekend.

Stopping fast track was an "important victory for hardworking Americans," said Rep. Mark Pocan (D-Wisconsin), "but it's not over. We need to be vigilant over the coming weeks to make sure people will have a real voice on any trade deal."