GOP TAKES A HIT - Paul Steinhauser: "Just more than half the public says that it's bad for the country that the GOP controls the House of Representatives, according to a new national poll conducted after the end of the partial government shutdown. And the CNN/ORC International survey also indicates that more than six in 10 Americans say that Speaker of the House John Boehner should be replaced….This is the first time since the Republicans won back control of the House in the 2010 midterm elections that a majority say their control of the chamber is bad for the country." [CNN, toplines] 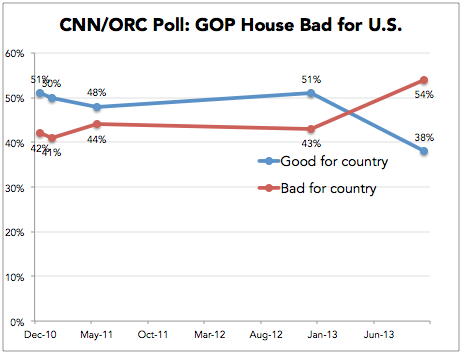 Democrats lead generic ballot - More from Steinhauser: "The shutdown seems to be making an impact on polls asking the generic ballot question: Would you vote for the Democratic or Republican candidate in your congressional district. There is no mention of the names of any candidates. Fifty percent of registered voters questioned said they would vote for the Democrat in their district, with 42% backing the Republican. The 8-point Democratic margin in the CNN poll is the same as in a recent NBC News/Wall Street Journal survey and close to the 9-point advantage for the Democrats in the generic ballot in a recent Quinnipiac University poll." [CNN]

OBAMA'S QUARTERLY APPROVAL DECLINES - Jeffrey M. Jones: "President Barack Obama averaged a 44.5% job approval rating during his 19th quarter in office, a decline of more than three percentage points from his 18th quarter. That is one of the largest quarter-to-quarter declines of his presidency, behind a nine-point drop in his third quarter and a six-point drop in his 11th quarter. The 19th quarter, which ran from July 20-Oct. 19, is now the third in a row in which Obama's job approval rating has declined." [Gallup] 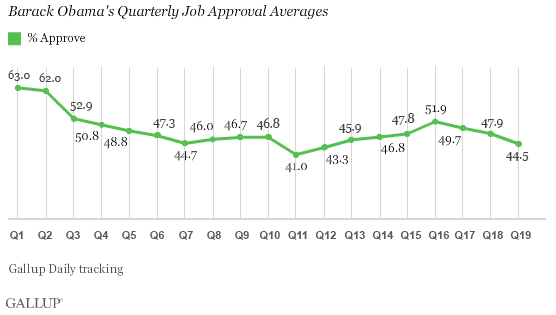 HEALTHCARE ROLLOUT GETS ROCKY RECEPTION - HuffPost: "Americans' first impression of the new online health insurance exchanges is "a bumpy launch," according to a Pew Research poll released Monday, the same day President Obama acknowledged the widespread technical problems with the rollout of HealthCare.gov since Oct.1. Yet, while many were aware of the website's problems, the 1 in 7 Americans who have visited the site largely found it usable, according to the survey, conducted earlier this month. A near-majority of 49 percent held the impression that the exchanges had not been working well, while just 29 percent thought they were working well, and another 25 percent weren't sure. Fourteen percent of Americans told Pew that they've already visited a health care exchange. Most weren't actively shopping -- twice as many visitors to the site said they just wanted to learn about the exchanges, and 70 percent who visited are currently insured. Just 4 percent of all Americans said they visited the site with an eye toward finding an option for their family." [HuffPost]

A separate poll also finds concerns - Peyton Craighill and Scott Clement: "Most Americans say the rocky start for HealthCare.gov is a harbinger of bigger problems for the Affordable Care Act, according to results of a new Washington Post-ABC News poll. Fifty-six percent of Americans say the website problems are part of a broader problem with the law’s implementation while just 40 percent see the website problems as an isolated incident…The bungled rollout has not soured support for the health law overall, however. Forty six percent now support it while 49 percent oppose it. That compares favorably to a 42 to 52 percent negative split last month. Support has rebounded since July among moderate and conservative Democrats, while Republican opposition has also softened. Criticism of the law is varied, with one in five opponents saying it doesn’t go far enough rather than saying it goes too far in changing the system." [WaPost]

-PPP (D) releases a third round of polling on House seats for MoveOn.org. [Scribd]

-The DNC's director of data architecture explains how they leveraged data analytics to understand and predict voter behavior in 2012. [ZDnet]

-Data miners and market research analysts are among the top 10 hot careers for recent and mid-career college graduates. [WaPost via @JoshdelaRosa1]