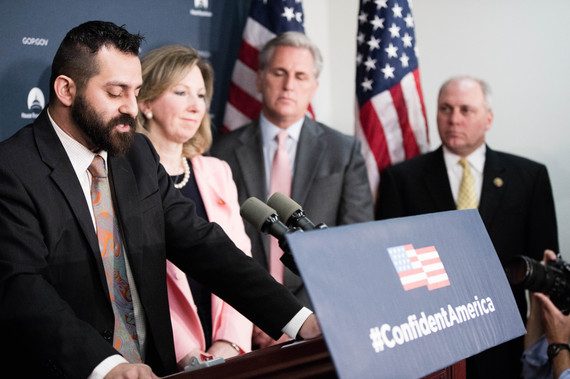 Early Wednesday morning, House Leadership along with individuals in long-term recovery, held a press conference on the Opioid Crisis plaguing a majority of the United States. While media expected the conference to be on issues such as the presumptive nominee Donald Trump, GOP leaders surprised many by instead talking about the need for comprehensive solutions towards substance use disorders and accidental drug poisoning deaths.

Chairman Fred Upton (R-MI), in a rare dose of authenticity spoke directly to the issues his constituents face on a daily basis, "Nearly every 12 minutes, someone in the U.S. dies of a drug overdose. People in communities across America are abusing both prescription pain killers and heroin. It is an epidemic. No one is immune; it is a sad reality that is playing out across the country, including in my own district in Southwest Michigan."

The press conference comes on the tails of a recent break through in the House, as companion legislation to the Senate's Comprehensive Addiction and Recovery Act, had recovery support services and funding reinserted into the proposed legislation. Speaker Paul Ryan spoke to the differences in the legislation, stating that "we will soon be in conference with the Senate, and we will have a bill on the President's desk fast".

"Nearly every 12 minutes, someone in the U.S. dies of a drug overdose. People in communities across America are abusing both prescription pain killers and heroin. It is an epidemic. No one is immune; it is a sad reality that is playing out across the country, including in my own district in Southwest Michigan."

While the media skewed the Q&A portion of the press conference towards inquiring about the House GOP leadership's views on Donald Trump, it could not detract form the importance of today's event. In a time of turmoil for our political system, the ability for the two-party system to find common ground and work towards comprehensive bi-partisan solutions is paramount. Regardless of the election cycle being in full swing, thousands of individuals and just as many families are being torn apart by substance use disorders.

The Hill will be partaking in deliberations and conferences over the next two days on legislation that is geared towards tackling the opioid epidemic in this country, and the press conference this morning is but the kick-off of what is sure to come. If the messaging used this morning is any indication, the country might just get what it needs out of our elected officials in D.C; and that is how government should work - responding the wills and needs of the individuals around the country.

Read more on #RightsForRecovery:
The Intersection of Reform: Criminal Justice and Behavioral Health