As of the last day of 2014, recording artist RaShaan Houston's Facebook fan page had just shy of 1,000 subscribers, a quantifiable measurement for a record year in which he performed at Chicago Pride and on the Hydrate Stage at Northalsted Market Days, struck a celebrity endorsement deal with Insurgent Couture clothing line, planned upcoming collaborative projects with legendary house vocalist Dajae and Motown fixture Mary Wilson of The Supremes, and hit No. 1 on Traxsource's Jackin House Essentials chart with his reissued classic house hit "Be With You," also available on iTunes. 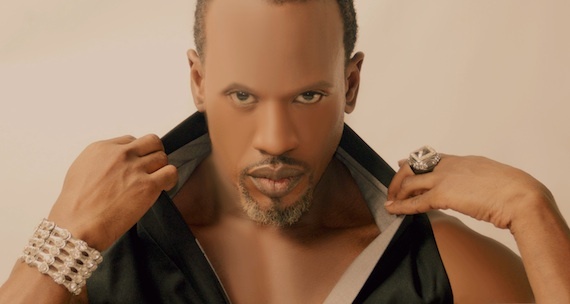 But since he reserves his fan page for promotional purposes, some of Houston's followers might not know that Dec. 31 also marked seven months of sobriety for this veteran entertainer, who admits that consuming alcohol had been a regular feature of his life since he first started performing in nightclubs at age 21.

"I was doing the music thing," he says. "I was a regular at the club, performing at all the clubs and traveling. I would drink regularly because I was always around it."

Now he's eager to tell the story of his journey to sobriety and how it paved the way for his recent successes in the hope that it will help others avoid some of the same problems he's experienced as a result of substance use:

Houston turned 40 last March, but in a recent hour-long phone conversation, he didn't mention his landmark birthday as a reason for choosing sobriety. Instead he credits his "second mother," the late, great drag queen and pageant titleholder Tajma Hall, who for 11 years gave him one repetitive, powerful piece of advice: focus.

Houston says that when Hall died shortly afterward on April 19 from heart complications at the young age of 44, he was by her side in the hospital "every single day" for the week before her death, during which she reminded him, "If you just focus all your energy where it needs to be, on your music, on the people who really care about you, not just those pretending so they can get what they want from you, you're going to feel so much better."

At that point, Houston had already identified alcohol as the common denominator in many situations that had launched his life into a vicious downward spiral, and he'd tried to give it up at least twice before. He says Hall told him, "Don't drink. It's not the devil, but it's not for everybody. I don't think it's for you right now."

Then he blacked out the night of her memorial, which, as the oldest of a chosen family of about three dozen Hall "children" from all across the globe, he'd been instrumental in arranging, when he "went out to make the rounds" with friends and family after the service:

One of my friends had to recap for me everything that had happened the night before, which I still don't remember now, and so that's when I made the decision: "Clearly you've identified the common denominator as alcohol. You can never allow that to happen again."

But blocking out uncomfortable feelings had been drinking's main attraction for Houston, who admits to using alcohol as a coping mechanism to forget about the pressure of always being on stage in social scenes -- even when he wasn't performing. It was a key ingredient for dulling the effects of the end of a bad relationship and was highly effective in keeping him from accepting the traumatic losses of his brother in 2005 and his father in 2012, until the unbearable emotional weight triggered a complete collapse in December 2013:

I didn't believe I was going to come out of it. I thought this was the final act, really. "You've lost this person. You've lost that person. This has happened, this setback. Your heart is broken. You're done. It's a laugh. Nobody wants to hear your music. Nobody cares about you." Part of it is [that] when you're in situations with people you shouldn't be in situations with, they kind of drill that in your head.

Six months after his breakdown, he was back on stage at Chicago Pride, sober, anticipating the release of "Be With You 2014":

That was the first time a lot of people had seen me since mid December. I had a totally different look. I'd lost all this weight.... For two years I was focused on other things that took away from my artistry, and I really didn't think I had it in me anymore.

Houston's sobriety is important to me not only because I can relate personally -- two years ago I gave up alcohol for my birthday, and as for Houston, it was not the first time I'd tried -- and not just because we've been a part of each other's story since the night we met at The Pulse nightclub in Albuquerque during Pride in 1998, when he jumped off stage to serenade me and a few other clubbers personally with his then-unreleased first single, "The Right Way." Houston's development as an artist is intrinsically entwined in the club history of Albuquerque, where he grew up and went to high school after his evangelist father moved his family there from Houston's birthplace of Pueblo, Colorado, in 1985.

So it's no small thing that one of Houston's lasting contributions to his hometown's social scene before relocating to Chicago, "the Mecca of house music," was his involvement in helping the owners of Effex Night Club -- the city's well-established premier dance club -- open their doors for Pride 2010. As I wrote here on HuffPost in 2012, simply opening the new venue demonstrated the entrepreneurs' commitment to providing the gay community with a welcoming place to dance and fraternize.

But Houston's triumph over one of the primary elements of nightlife -- intoxication -- paints a revealing portrait of some of the unintended side effects of this sort of social setting:

It was how we socialized, inside and outside of the club, because I was always around club people. It's not necessarily that every person in the club is a drinker. But the ones I happened to be around, that's how we socialized.

This tendency in certain social circles is clear in some of the reactions Houston has received from others regarding his sobriety, and it's one of the reasons that, these days, he only stays in clubs long enough to perform, not hang out:

Numerous people I've met just don't understand it. There's one person specifically who said, "I just don't trust a person who doesn't drink. Not even a little bit? Not even the holidays? Nothing? People who don't drink are confusing to me. It's so sneaky. Everyone else is drunk and you're not? I just don't get it."

I feel that statements like this reveal the codependence that people employ in their alcohol use, since their consumption is determined by that of everyone else around them. Similarly, I see "I only drink socially" as a neon warning sign pointing to problem drinkers, especially those who deny that they have a problem for that very reason and hail it as their mantra every time they go out for a drink, for which they will be sure to surround themselves with others who drink, or will go ahead and drink anyway when they can't. And I almost always observe those who swear by the one-drink rule ordering two or three before the night is done.

Houston realizes that choosing sobriety is more about gaining something than giving something up, and this keeps concerns of relapse well at bay:

I'm just really committed to being the best I can, now that I've got a taste of what I really can be like. There's always flashes of that greatness in there, and then you finally remove everything and everybody that may diminish from that or keep you from that. Now that I'm getting a taste of that, it's enough motivation for me to stay in this place.

For this iconic artist who says that winning the Grammy he knows is waiting for him will be the pinnacle of his life's work -- and for everyone else working toward their own Grammys -- Houston's inspiring story clearly illustrates the right way.