Friday was the beginning of the end of television as we know it -- or at least that's what Netflix would like you to believe.

The popular video-streaming service released the political drama "House of Cards" early Friday morning. The star-studded series about the underbelly of D.C. politics -- featuring glittery names like Kevin Spacey and executive producer David Fincher -- cost Netflix $100 million to make. That's a whopping price, until you consider what Netflix is trying to buy. Sensing moneyed competition from Amazon and Google, Netflix is taking a chance on premium original content to secure its customer base, ensure its survival and become the next HBO.

Reed Hastings has a vision for TV that ought to scare studio heads as much as Netflix's first business -- direct-by-mail DVDs -- scared Blockbuster. According to profile of Hastings in this month's GQ, he and his executives imagine a TV land where episodes don't conform to 22-minute-long blocks, directors aren't beholden to corporate middlemen and viewers don't have to wait week to week to watch episodes.

Early Friday morning Netflix put up all 13 episodes of "House of Cards" and asks its subscribers to binge away. The success of this grand experiment hinges much on how good of a show "House of Cards" turns out being. Currently, the show is getting a 76 out of 100 on Metacritic, based off of an aggregation of 22 reviewers. That puts it somewhere between FX's "The Americans" and Fox's "The Following" -- a good rating, but is it good enough to earn Netflix enough new members to break even on the project?

After crunching the numbers, the Atlantic Wire's Rebecca Greenfield notes that Netflix will need an additional 520,000 subscribers to cover the $100 millon cost of the project -- not a significant increase, percentage-wise, to its existing 33 million userbase. Netflix's plan is to roll out at least five new shows a year, meaning they'll realistically need a 10 percent increase in users to cover costs.

Yes, "House of Cards," a remake of a popular British drama from the 1990s, was somewhat of a safe bet considering its success across the pond. But coming in April is a new season of the cult hit "Arrested Development," which will surely draw even more customers to Netflix's banana stand than "Cards" will.

Netflix is known for its PR disasters, like most recently when raised prices and unbundled its DVD and streaming businesses and lost hundreds of thousands of customers. It may very well have another up its sleeve. But based on positive critical reaction, which you can check out below, Netflix is already off to a really good start to its HBO-ification.

Correction: The original version of this post including an incorrect Metacritic score. 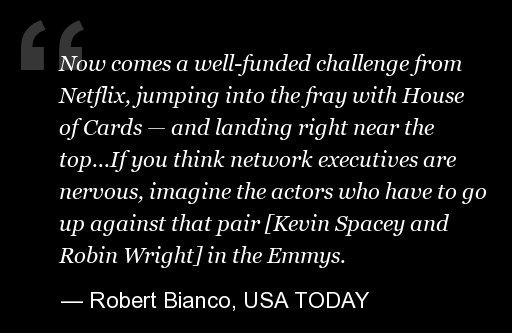