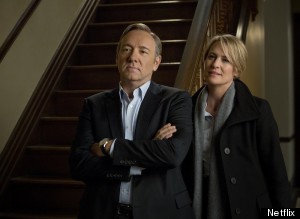 It's appropriate that the cool green, blue and brown palette of "House of Cards," a Netflix drama premiering Friday, February 1, resembles that of a murky underwater world.

Its lead characters are sharks, and they're all the more scary when they arrange their mouths into pitiless smiles.

I've only seen two installments of the 13-episode "House of Cards," which will be available in full Friday, so I can't offer a complete assessment of the show, for which David Fincher serves as an executive producer and director of those opening episodes. But I can say that in the early going, it resembles the many other top-dollar cable productions we've seen in the last decade, for good and ill.

Like any self-respecting upper-tier drama, it has a first-rate cast: Kevin Spacey plays Francis Underwood, a smooth-talking Southern politician who sits at the heart of the gears and levers that keep Congress (not quite) running. Robin Wright is equally calm and conniving as his wife, Claire, the head of a DC non-profit that would benefit from Francis rising further in the political establishment. Together they are the kind of chilly, manicured types familiar from David Fincher's films -- smart, suspicious people who are quietly seething with equal parts rage and ambition.

Francis' coldness is balanced, in a manner of speaking, by the simmering heat of his anger at slights large and small, but his folksy drawl -- which he sometimes uses to address the audience directly -- in no way obscures his relentless drive or his innate arrogance. Spacey holds the screen like the wily pro he is, but will Underwood's amused condescension become wearisome over 13 hours? I would say "time would tell" if the series were airing over three months, but you can find out in a day, if you care to.

A decade and a half ago, HBO kicked off the Golden Age of TV with "Oz" and "The Sopranos," and you could make the case that "House of Cards" is the logical next step in that journey to the dark side. Those dramas were far more cynical and unsparing than anything TV had attempted up to that point (even Spacey's turn as a psycho criminal years ago on "Wiseguy"). Even so, HBO was and is a commercial entity that needs to make sure that vast numbers of their subscribers don't decide to quit paying for the service.

Netflix has to keep subscribers happy as well, but judging by "House of Cards," the network doesn't feel constrained by, well, much of anything (certainly not by budget concerns -- Netflix committed to two seasons of "House of Cards" at a reported cost of $100 million). "House of Cards" is a strange mixture of freedom -- Fincher and his cohorts clearly did what they wanted to do -- and limitation: These powerful, venal characters and the well-tended hothouse they live in feel quite familiar (and not just because this is based on a UK miniseries of the same name).

But credit must be given where it's due: "House of Cards" is unafraid to take Underwood to an extraordinarily dark place in the opening scene of the first episode. He never really warms up after that, and the idea that a lead character should consist of a mixture of admirable and lamentable qualities is now apparently as quaint as "Wiseguy's" early attempts at serialization. You could compare the rise of multiple storytelling platforms that cater to almost every taste to the spread of high-end coffee chains: These days it's not that hard to get an espresso -- and a protagonist -- that's as dark and bitter as they come.

The early arc of "House of Cards," which moves along at a smooth, polished clip, shows Francis taking out his enemies like so many unfortunate fish in a barrel. You certainly can't picture this guy giving a damn about lost ducks wandering into his back yard, a la Tony Soprano -- in fact, some of the things Underwood does would have had Tony booking a double session with Dr. Melfi. But this particular narcissist doesn't suffer from self-doubt, the rocket fuel of TV's Golden Age.

Not surprisingly, Underwood views the rest of DC with contempt (during meetings, he imagines colleagues' "lightly salted faces frying in a skillet.") His wife makes her ruthlessness equally clear, but there's one quality-drama trope "House of Cards" steers clear of: Francis and Claire have a strong, deep bond and a shared agenda. She is not, thank God, the usual killjoy wife.

But other elements of the show are weak, verging on wince-inducing, especially scenes involving the employees of a DC newspaper. Just once, for the love of God, I'd like someone who knows how print and digital operations actually work to write scenes that make them seem interesting and fresh, and that don't involve female co-workers who are unable to resist petty catfights. Everything on that front comes off as uninspired outtakes from "The Newsroom." (Sidebar: Can we please declare a moratorium on characters in scripted dramas lamenting the death of quality journalism? It's not 2003. The Internet is not the devil. Simmer down, everyone.)

If you already think that politicians are venal, vindictive and selfish, "House of Cards" won't do anything to dissuade you from that view; in fact, Underwood seems determined to confirm it in every possible way, with a devilish twinkle in his eye. Presumably Underwood won't get his way all the time, but much of the first two hours consists of him briskly revenging his enemies. His successes don't appear to bring him much lasting pleasure, but that doesn't appear to be the point.

Fair or not, some thought the ultimate message of "The Sopranos" was that people are inherently selfish and can't change, an idea "House of Cards" takes as its bleak starting point -- and where it will end up is anyone's guess (though the Fincherian worldview is not one that allows for a whole lot of optimism, much less redemption). For now, it's just a little disconcerting to contemplate the idea that, at this point, scripted drama's future looks a lot like its past.

"House of Cards" is either the next logical step in scripted drama's decade-and-a-half-long exploration of anti-hero tropes, or it's a new platform taking shopworn ideas for one more expensive spin. As Andy Greenwald pointed out in his review of "The Americans," the anti-hero trope has led, in recent years, to "an increasing sense of sameness and hot air, [it was] a template designed to push the envelope but not toward anything in particular."

It's understandable that Netflix, a new player in the scripted-originals business, would want to make its bones with high-gloss projects involving established names (the horror series "Hemlock Grove," from "Hostel's" Eli Roth, will turn up in April, and more "Arrested Development" episodes arrrive in May). Netflix's true test will be its ability to spot new talent as regularly as the smartest TV networks do, and finding ways to addict its subscribers to fresh, distinctive worldviews that take full advantage of the storytelling possibilities that platform has to offer.

Time really will tell on that front.

I recently interviewed executive producer and showrunner Beau Willimon, and Ryan McGee and I discussed "House of Cards" in the most recent Talking TV podcast, which is here, on iTunes and below.