Even though "The West Wing" and "House of Cards" both take place in Washington, D.C., their views on the political world are very different, but that doesn't mean that "House of Cards" can't tip its hat to the classic political series that came before it.

Here are two scenes from "House of Cards" Season 2 that may have given "West Wing" fans a case of déjà vu.

House of Cards:
In the second season finale Doug Stamper, Frank Underwood's Chief of Staff, is hit in the head with a rock and left for dead in the woods outside Camp David. 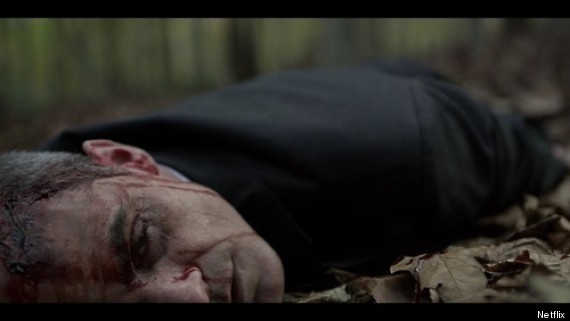 The West Wing:
Leo McGarry, President Bartlet's Chief of Staff, suffers a heart attack, also in the woods surrounding Camp David, after being fired by Bartlet.

Similarities: Doug and Leo are both Chiefs of Staff (Doug to Underwood, Leo to Bartlet), they are both recovering alcoholics, and both are left dying in the woods outside of Camp David -- Leo lives though.

"'Dark Was the Night' Gets Me Every Time"

The West Wing:
After the Voyager spacecraft left the solar system, Josh Lyman makes a case to Donna Moss about why the United States should send astronauts to Mars, winning over Donna with Blind Willie Johnson:

Similarities: Blind Willie Johnson isn't mentioned in everyday conversation, but even stronger evidence is that in the "House of Cards" scene Frank says, "'Dark Was the Night' gets me every time," and in "The West Wing" scene, after Josh explains Johnson's life to Donna she exits the scene saying, "You got me."

Are these coincidences? One might think so, but it turns out that Rick Cleveland, one of the executive producers on "House of Cards" was a writer and co-producer on "The West Wing." He even won an Emmy for "The West Wing," with creator Aaron Sorkin, for writing the episode "In Excelsis Deo."

Coincidences or not, one thing is for certain ... We would much rather live in the positive political world of "The West Wing" than the carnage-filled one of "House of Cards."