In 2014, the high-stakes battle for control of the U.S. Senate, rather than individual House races, has gotten most of the attention from pollsters and the news media. However, the most recent data from national and district-level surveys suggests that while they're polling significantly behind the level of the 2010 GOP wave, Republicans are poised to expand their U.S. House majority on Tuesday, gaining at least a half dozen seats and perhaps as many as 10 to 15.

Compared to the U.S. Senate races, publicly released polling at the level of individual U.S. House seats is rare. Heading into the final weekend of campaign 2014, for example, HuffPost Pollster had found less than a dozen House contests for which 5 or more polls have been released publicly.

On Friday, CBS News, in partnership with The New York Times and the online pollsters YouGov, asked voters in all 435 U.S. House Districts about which candidate they are planning to support for U.S. House, with larger samples for the most competitive districts. The poll predicted that Republicans will gain between 6 and 12 seats in the House. Interviews were conducted with respondents drawn from YouGov's opt-in panel of Internet-based respondents. To help bolster their estimates, YouGov also combined the survey responses with “fundamentals” about the district, including past votes for Congress and president, campaign spending, and whether the race features an incumbent seeking reelection.

While it is unusual to have district-by-district data, there is also a broader way of looking at which party will win the House: the "generic vote" question used by national pollsters, which typically asks poll respondents to say whether they would vote for "the Democratic Party's candidate or the Republican Party's candidate" if the election were held today, not taking into account the actual candidates running for office or even whether an incumbent may be running unopposed. (Some also ask a more general question about what party voters would prefer control the U.S. Congress.) While the generic vote question is something of blunt instrument, pollsters and political scientists consider it to be a reasonable predictor of national voting.

Answers to that question often differ significantly from poll to poll. Over the last few weeks, for example, national polls have yielded results varying from a 1-point deficit for the Democrats to an 8-point landslide for the Republicans. Six polls found the two parties in a dead heat, within 1 percentage point of one another. 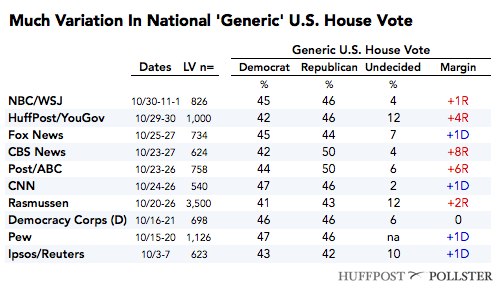 HuffPost Pollster's tracking model for the generic House vote, which combines all of the public polls, has given Republicans an advantage of roughly 2 percentage points on the national generic vote question since early August. Democrats may see that margin as relatively good news, since national polls in 2010 had Republicans leading by much wider margins. Pollster's final 2010 average gave the GOP an 8-point advantage.

The bigger challenge is that the national U.S. House vote does not translate easily into estimates of how many seats each party wins, since population patterns and congressional redistricting results in a greater concentration of Democratic votes in urban districts. In 2012, for example, more votes were cast nationwide for Democrats (49 percent) than Republicans (48 percent), but Republicans held their 33-seat House majority.

An analysis by FiveThirtyEight's Harry Enten suggests that a 2-point Republican advantage in the national House vote would translate into Republicans adding roughly seven seats to their current 233-seat majority. A national vote margin of 3 to 4 percentage points would translate into a GOP gain of roughly 11 to 15 seats, according to Enten's analysis.

Similarly, given predicted poll results of a tie to a 5-point Republican advantage, a statistical model created by Emory University political scientist Alan Abramowitz would estimate that the GOP gains between 5 and 15 seats in the House. (Via email, however, Abramowitz warned that his model is difficult to apply to polls of likely voters taken late in the campaigns; he sticks to his model's prediction from late September that Republicans will gain 4 to 5 seats.)

While district-level polling is rare and the details of the statistical models complex and a bit murky, those derived from opinion polls are pointing mostly in the same direction: Republicans should gain as few as six and perhaps as many as a dozen or more seats in the House.