What does a family facing bankruptcy need more than anything?

According to Ohio Representative John Boccieri the answer is easy: guns!

Tomorrow the U.S. House is expected to take up Representative Boccieri's "The Protecting Gun Owners in Bankruptcy Act of 2010," a bill that would guarantee that the guns of individuals facing bankruptcy would be exempt from the claims of creditors. Not surprisingly, the bill is supported by the National Rifle Association. 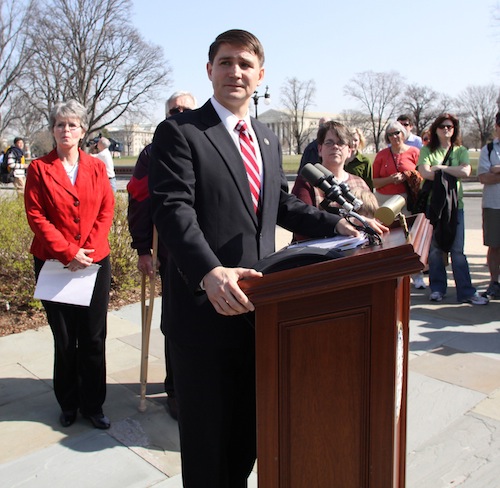 As Boccieri explained in a letter to his congressional colleagues seeking co-sponsors:

In these difficult times, it is vital that Congress maintain individuals' constitutional property rights. Some property rights are secure; clothing, pets, or crops can be deemed exempt from repossession. Other property rights, however, are ignored, most notably 2nd Amendment rights.

While Congress works to pull our nation out of this economic recession, many people across the nation continue to struggle with depleted savings and increasing financial restraint. Residents of areas hit particularly hard by the recent economic downturn must make hard choices to sustain their families, and are often forced to file bankruptcy. Many times this results in individuals seeing their assets reclaimed and sold to pay off their debt, with creditors paying little regard to their well-being.

Contrary to Representative Boccieri's NRA-endorsed image of armed heads of households being able to "sustain their families" through financial calamity with the comforting reassurance of a firearm, the presence of guns in households experiencing bankruptcy or other financial distress actually enhances the risk of suicide or murder-suicide. According to the National Violent Death Reporting System (NVDRS) -- the only federal data that details such information -- more than 12 percent of firearm-related murder-suicides and suicides were precipitated by financial problems. Media accounts of murder-suicides also often include descriptions of the financial struggles, including bankruptcy, that precede such desperate acts:

Representative Boccieri says his bill is needed because "gun owners in America facing bankruptcy have no choice but to relinquish the protection secured for them by the U.S. Constitution." Yet, far from offering protection, firearms are by far the weapons most commonly used in murder-suicide. Studies confirm that firearms are used in approximately 90 percent of murder-suicides. At the same time, guns are rarely used to justifiably kill criminals. According to the Federal Bureau of Investigation's Uniform Crime Reports, in 2008 firearms were used only 204 times by private citizens to justifiably kill a criminal during the commission of a felony in the United States.

While Representative Boccieri's bill promises to protect the firearms of bankrupt gun owners, the question remains: Who will protect their families?