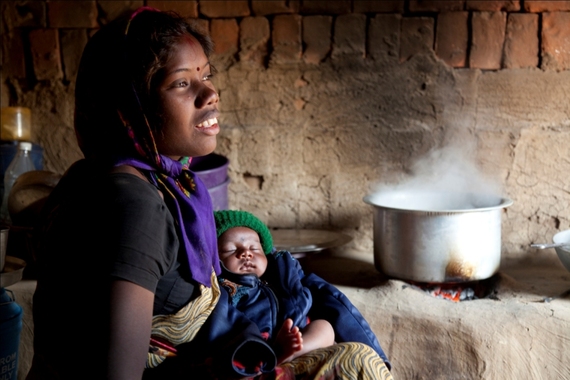 As we look at how to achieve gender equality on International Women's Day, Dr Flavia Bustreo, Assistant Director-General of the World Health Organization, highlights one area in which lack of parity harms women's health.

I come from Italy, where people love to eat and share meals with family and friends. It is an aspect of my home culture that I cherish.

Cooking and enjoying food are universal activities. However, cooking for pleasure in a safe environment is, unfortunately, anything but universal.

Millions of women - and it is mostly women - cook on stoves or fires that fill the room with thick smoke from polluting fuels such as wood, dung and coal. This poses an enormous risk to health. Imagine yourself in a room where 400 cigarettes are being smoked every hour and you will get some idea of the exposure to harmful emissions.

International Women's Day this year is themed around parity. In a world where women are vastly overburdened with exposure to household air pollution from polluting and unhealthy home energy sources, this is a highly gendered issue that demands global attention.

The effects of exposure to household air pollution are horrendous. For women in low- and middle-income countries, it is the single leading environmental health risk and a main cause of noncommunicable diseases like strokes, chronic obstructive pulmonary disease, lung cancer and heart disease. More than 60% of all premature deaths from household air pollution in 2012 were among women and children.

The problem is even more serious than we thought. A new World Health Organization report on household energy, out later this month, will upwardly revise the estimate of people who mainly cook with polluting fuels from 2.8 billion to 3.1 billion, or 43% of the global population. The report - Burning Opportunity: Clean Household Energy for Health, Sustainable Development, and Wellbeing of Women and Children - will also present new evidence on the health risks associated with fuels used for heating and lighting, including the first estimates of the wide-scale use of kerosene, a very polluting and health-damaging fuel.

Household reliance on polluting fuels is intertwined with other development themes, not least climate change - where the same polluting fuels that cause household air pollution also release greenhouse gases. These links are reflected across the new Sustainable Development Goals (SDGs), which include specific goals and targets around health for all, climate change, gender equality and clean energy and technologies that protect health.

SDGs and Global Strategy for Women's, Children's and Adolescents' Health

Clearly, household air pollution is not an issue for the health sector alone. Health professionals need to work with other organizations and individuals from across society to understand the problem, allocate resources and develop plans to tackle it. The new Global Strategy for Women's, Children's and Adolescents' Health (2016-2030) provides a blueprint for the kind of integrated multi-sector effort required, taking inspiration and indicators from the SDGs.

Whatever approaches are taken, they must address the fundamental issue of gender inequality. As well as suffering much more than men from household air pollution, women and girls in low-income countries also pay more with their time and effort. A World Bank study of village transport in Ghana, Tanzania and Zambia in the early 1990s showed that women worked almost three times longer than men transporting firewood, water and other household essentials - usually with their own hands, heads and backs - and carried four times the volume.

This has serious implications for women's rights and life chances, because many girls are out collecting firewood and water while their brothers are at school. Burning Opportunity will present new findings on this and related areas.

Health researchers need to dig deeper into the links between household energy and gender inequality. This will help us understand how some communities switch successfully to clean energy, and a more equal share of tasks such as cooking and collecting fuel, while others are slow to change.

We also need more detailed information about the use of polluting fuels and the health benefits of clean alternatives. To obtain this new information, WHO is working with partners to improve global monitoring of fuels and technologies used for cooking, heating and lighting, and the amount of time women and girls spend collecting fuel and preparing meals.

I have painted a grim picture of ill health and unrelenting toil for millions of women and girls worldwide, but progress is possible. Countries, such as India, Indonesia and Ethiopia, which have invested in new forms of clean energy for cooking, heating and lighting, and made them widely available at affordable prices, are already transforming the health and well-being of their citizens, and greatly reducing the burden on women. However, they must also invest in social change, because attitudes that confine women to the home are perhaps the greatest barrier to progress against household air pollution.

Is universal access to clean energy too much to ask as we celebrate International Women's Day? You can be sure it would greatly ease the health burden of household air pollution borne by the women of the world.