A consensus seems to be forming that U.S. consumers have cleaned up their balance sheets enough that they're ready to stuff themselves with debt all over again, ushering in a glorious economic boom. It's hard to see much evidence of that.

Oh, sure, consumers are starting to take on debt again. The New York Federal Reserve reported on Wednesday that auto loans rose by $20 billion in the second quarter, the biggest increase since 2006, and credit-card balances expanded by $8 billion. Student loan debt jumped another $8 billion, like it does, continuing to suck the life out of our economic future.

But are consumers ready to take on more debt? The Wall Street Journal seems to think so, splashing on its front page today a headline that reads "Confident Consumers Step Up Their Borrowing," with a lede reading: "After years of struggling to shed debt, Americans are finally gaining enough confidence in their finances to step up borrowing for autos, homes and other goods -- a shift that could boost the economic recovery."

Hooray, but for one problem: Households really haven't shed all that much debt. The New York Fed reported that households had $11.15 trillion in debt in the second quarter. That's down $78 billion from the first quarter, which is great. And yet debt is only about $1.5 trillion lower than it was at its peak in the third quarter of 2008 -- in the middle of a mammoth recession that was partly caused by, guess what, way too much household debt. (Story continues below the New York Fed's chart of mountainous debt levels.) 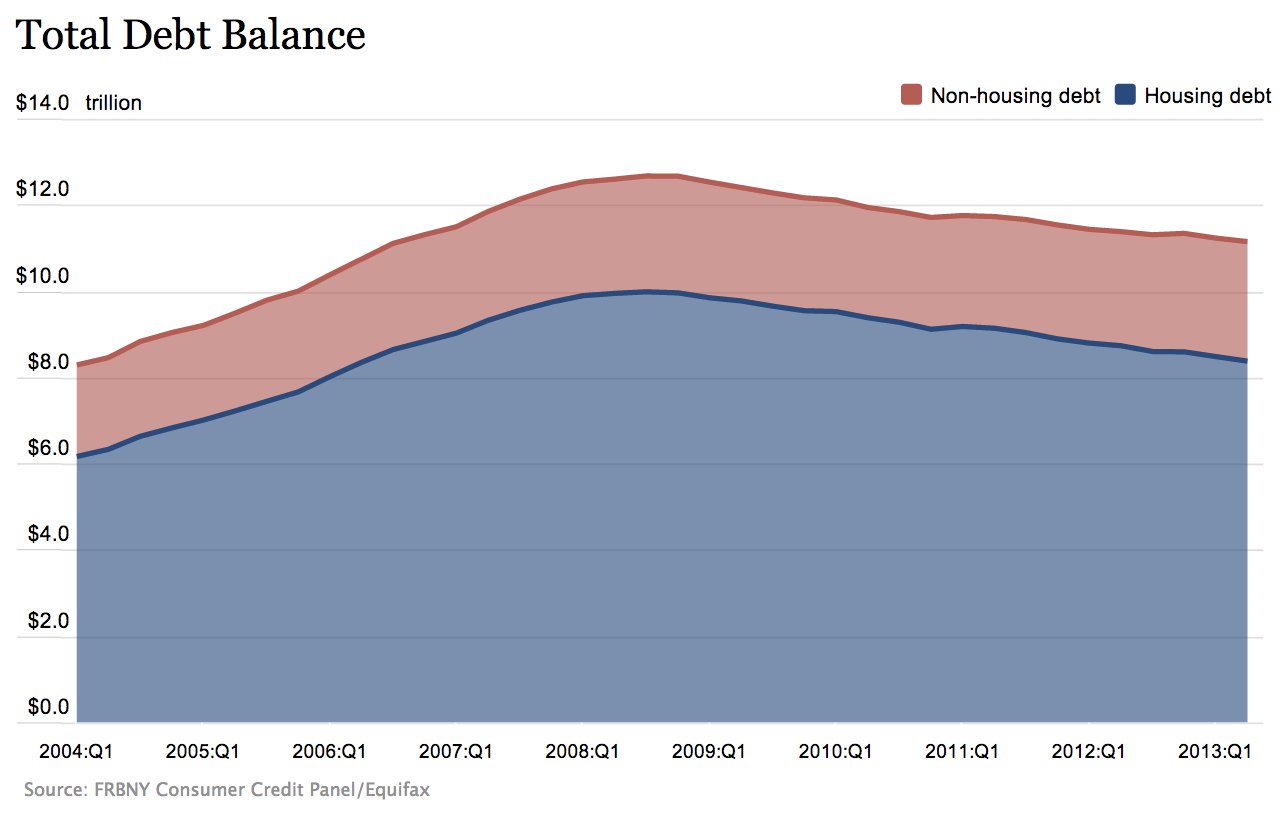 By comparison, consumer debt is still nearly $3 trillion higher than it was nine years ago, when the debt bubble was in its middle stages.

It does not help that consumers are still falling behind on their debts at a pace nearly three times faster than they did in the relatively quiet days of 2004.

As finance blogger Barry Ritholtz wrote yesterday, japing at some of the overly cheerful headlines about the New York Fed report, "Yay! We Suck Much Less Then We Used To!"

As if to confirm that consumers might not yet be ready to go on a spending splurge, Wal-Mart on Thursday reported quarterly revenue that fell short of expectations by nearly $2 billion, cut its forecast for the full year's profit and warned that the back-to-school shopping season was going to disappoint, too. Company executives used the phrase "challenging retail environment" or something like it ten times in their conference call. (H/T to Kim Bhasin.)

This matters a lot, because consumer spending makes up about two-thirds of all U.S. economic growth. Still-high debt levels and anemic wage growth -- the WSJ makes a big deal out of how incomes have grown 6 percent in four years, which is pitiful -- are keeping consumer demand weak. That keeps businesses from expanding and hiring and slows down the whole economy.

Household debt is still a big problem, but don't be confused: Government debt is not a problem. In fact, the government should be going deeper into debt now, while interest rates are still relatively low, to help generate demand while consumers continue to nurse themselves back to health.