Being single isn’t a big economic drag, as long as you don’t live with your parents.

For the first time since the government started keeping this count in 1976, a majority of adult Americans (50.2 percent) are single, according to the Bureau of Labor Statistics. Economically, this worries some people. Less marriage means less spending, and less spending is bad for a spending-driven economy.

But the current dynamics of age and marriage in the U.S. make this less of a worry. People are getting married older, but because life expectancy has grown so much, “Americans today are actually marrying sooner in their lifetime,” the Census Bureau's Jonathan Vespa wrote. If Americans married at the same point in their expected lifespan now as they did in 1890, Vespa wrote, they would be getting married in their early 40s.

The real worry from an economic perspective is not fewer married people, but fewer new households. Household formation -- establishing a new home with roommates, partners or alone by renting or buying -- has been more or less flatlining for the past three years. This chart tracking the total number of U.S. households from Sober Look is, well, sobering (vertical axis in the thousands): 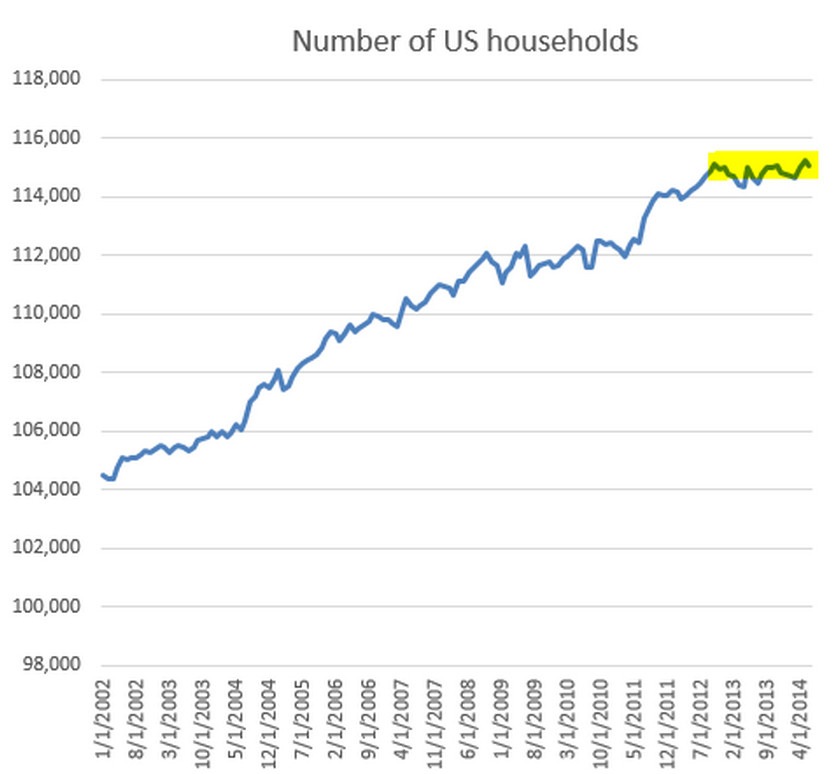 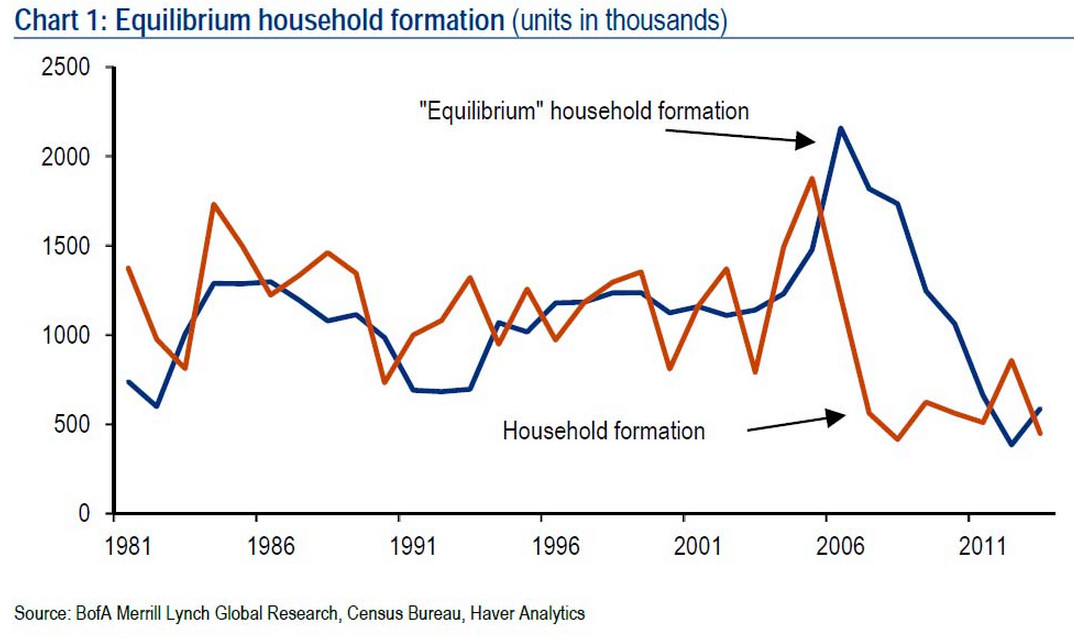 Another cringe-worthy set of stats, from the Federal Reserve Bank of Atlanta: "In 2012, 45 percent of 18- to 30-year-olds lived with older family members, compared to 39 percent in 1990 and 35 percent in 1980. That increase translates to several million more young adults choosing to live with relatives rather than to form a new household."

Household formation is serious economic business. One new household usually adds about $145,000 to the U.S. economy, as the spending on building materials, construction wages and all those trips to Best Buy, Home Depot and Ikea ripple through the economy.

This stream of economic activity has been relatively weak lately, with significant consequences for the U.S. economy. Normally, a recovering housing market leads the way for a broader economic recovery. But with household formations slumping, that hasn’t been the case this time. Housing has bounced back since the recession, but it hasn’t sparked the economy like it used to. Again, the Atlanta Fed has the depressing conclusion: “The decline in household formations is the main reason why the housing industry did not play its traditional role of driving the economic recovery.”

What explains the drop in household formation? For the most part, the millennial trinity of economic despair: not enough jobs, higher housing costs and much more student debt.

The unemployment rate for Americans aged 18 to 29 is about four percentage points higher than the national average of 6.1 percent. Last year, the New York Fed pointed the finger at the poor labor market and rising student debt loads as reasons why young people are buying houses at a lower-than-normal rate.

Buying a house is only one kind of household formation, however. Renting, alone or with roommates, counts too. But here again, student debt pops up. As David Dayen put it in The New Republic, "a struggling student debt holder who can't afford a mortgage -- or find a job -- may also have trouble affording rent or passing a credit check from a landlord."

And if that person has to move in with three roommates instead of one, that pushes down the household formation rate, Dayen pointed out. Sure, one household of four is being formed. But two households of two might have been formed. From a pure economic growth perspective, the latter is better.