The drive north along the southern California coast from L.A. to Santa Barbara is a mind-expanding passage. The concrete confines of downtown Los Angeles, where I'd spent the better part of last year relents to Pacific Ocean panoramas.

Breathing a little deeper with each mile I put between myself and the city, I drift past sands of some of Southern California's most popular surf spots, sailing past Malibu to Zuma and onto El Capitan to El Matador, I'm heading to Santa Barbara's Rincon Beach.

Somewhere around Carpentaria I flip on the cruise control and finally relax into a 65-mile-an-hour groove as I stretch my eyes out over the horizon, defocusing on triplet oil rigs dancing on the waves through a cloud of grey smog.

By the time I arrive in Santa Barbara my tides have shifted, the homeless zoo of skid row in downtown L.A. has vanished from the rear view mirror, the ocean wind and open road have cleared my mind as I pull to the curb in one of the state's most popular tourist destinations, the American Riviera. Clean-scrubbed tourists meander State Street shopping, snacking and taking in the town which includes one decidedly unexpected sight; a hornet's nest of homelessness.

Young and old travelers, wanderers, street kids -- the houseless and homeless occupy the streets of Santa Barbara. There are more white people sleeping outside in Santa Barbara and it's neighboring counties than I've seen anywhere in the U.S. 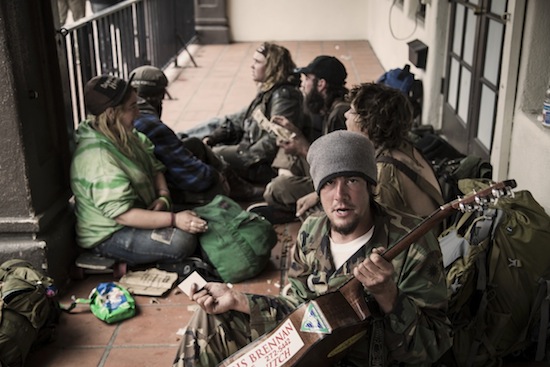 Among my new street sleeping friends on State Street are Helen, a 21-year-old traveler from Portland, Oregon who has been in Santa Barbara for only a few days. She's been busking with her accordion for change for the last three weeks. Melissa, a 21-year-old local who is six months pregnant has recently moved inside after being homeless since she was 14, "This is my family," she says about a group of street kids she hangs out with. Marjorie, a 64-year-old former schoolteacher with a master's degree in French Literature, has been homeless for more than two years. Her family has resources but she says her family is not helping her. "They're out of the picture," she says. Lorenzo Wolfe from nearby Santa Maria is a Vietnam vet who served as a door gunner identifies himself as a "street beggar." R.J. looks young for his 19 years says he takes a "beach bath" every few weeks to keep clean. Harp is from San Francisco; he was involved in Occupy there. His small groups of friends are not doing so well. They're dirty, scabbed up and make a racket. He says the cops have targeted them and harass them daily.

Santa Barbara is the land of the have and have-nots. Close up and personal on State Street, the disparity between those on the street and those in the stores is representative of what you find all across the country.

Tourists who spend 250 bucks a pop for a pair of Prada sunglasses in the high-end retail sector of State Street, find themselves stepping over indigent elderly on their way to Starbucks. The issues that drive transgenerational poverty in the U.S. are on full display in the American Rivera; mental health, addiction, unemployment, spousal abuse, incarceration, racism and all the others are embodied in human form on the American Riviera. You can meet some of them on the Homeless Blog.