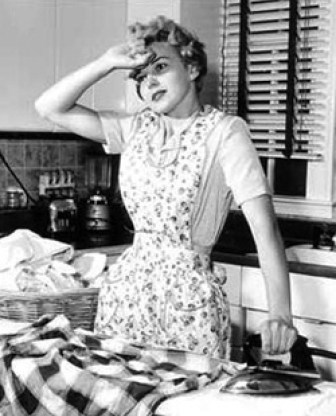 It took four punches of the snooze button to get me out of bed this morning.

I wasn't tired. Or sick, for that matter.

But I was sick and tired. Sick and tired of the same old routine, minute after minute, day after day, year after year, since 1995, when I made the decision to stay at home to manage our family.

Now don't get me wrong -- I truly love my life and wouldn't have it any other way. I am proud that I gave up my own professional ambitions for the humble satisfaction of providing home cooked meals, a warm and loving environment, and a constant and dependable presence to my family.

But frankly, after two decades, I'd rather chew my own arm off than empty the dishwasher again. I'd take a frying pan to the head to put me out of the misery of defrosting another pound of ground beef. If given the choice, I'd rather swallow a fistful of wriggling grubs than dust the ceiling fan blades one more time.

I often fear that I'm on the brink of some sort of total housewife breakdown. Emptying the lint trap gives me the shakes. Putting the steak knives away makes my left eye twitch. I can't sponge another sticky spot off the countertop without feeling palpitations, and I have completely lost the ability to par-boil anything.

Over the last year, my poor family has been witness to the steady decline of my cooking, cleaning and parenting skills. It has come as somewhat of a shock to them, because for almost two decades, I was Supermom.

A licensed and gainfully employed litigation attorney, I made the decision to put my lucrative career aside two years into marriage, to raise the kids and support my husband Francis' active duty military career no matter where it would take us. I'll admit that my initial high standards and work ethic were based primarily on one thing: guilt. Since I wasn't bringing in any income, I felt that I had to knock it out of the park as a homemaker.

But as the years passed, I saw the value of my choice. Not just during the obvious times when being at home was crucial, such as deployments, but also during the subtle everyday moments when my family was better off for having a dependable presence in their lives.

My kids knew that, no matter where we were stationed, I would always be there to walk them to school, pack their lunches, keep them home when sick, bring cupcakes to soccer games, and chaperone field trips. The subtle sense of security they felt was crucial in turning our typical military kids into the independent, accomplished, confident individuals they are today.

I was fortunate too, because I've had a front-row seat to our children's lives. While Francis worked long hours to support our family, I got to see each kid get Citizen of the Month. I cheered at every raucous flag football game. I secretly cringed at every pitchy middle school band concert. I toasted every waffle, mashed every potato, posted every chore chart, and kissed every boo-boo.

Now, with only two more years left before our youngest goes off to college, I've lost sight of how lucky I've been. After fourth alarm went off this morning, it dawned on me. "Anna's graduating in a month," I scolded myself, "now, get up and fry her a lousy egg!"

"No thanks, Mom, we're leaving early to have breakfast with our friends," Anna told me, her hand held out in hopes that cash would land in it. With the melody of "Cat's In the Cradle" playing in my head, I gave her my last $20, and watched out the kitchen window as they drove away.

That was all the motivation I needed.

I may not skip around the house in search of dust bunnies today. I won't do any cartwheels over the latest Crock Pot recipe. I'll probably avoid cleaning the rust stains off toilet bowl. But I won't let myself get so bogged down in the mundane tasks of every day life, that I forget the subtle yet countless blessings of making a loving home for my family.