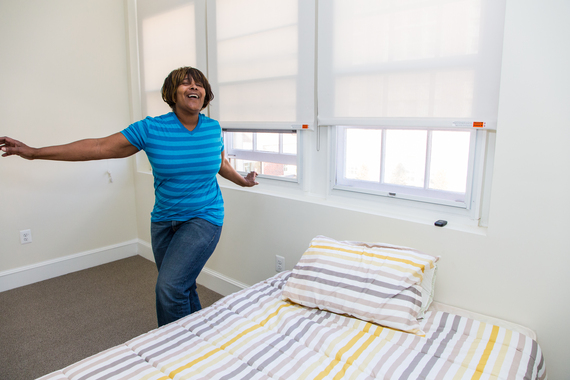 Six years into the Housing First model in DC, it is obvious that the decision to embrace the new approach was a momentous one for the District's homeless services system.

The model came into the District some years before the DC Council decided to implement it at the city level through Pathways to Housing, which had piloted it in New York City. Its founder, Sam Tsemberis, based his work on his observations on city streets and backed it clinically with Bill Anthony's work in psychiatric rehabilitation at Boston University, an excellent choice.

Truth be told, I recently heard at a colloquy at The University of Southern California in Los Angeles that a Housing First pilot for families predated the New York initiative there. So kudos to California on this! The Golden State can certainly incubate some very forward thinking programming.

With that said, Pathways went further in articulating and disseminating the model nationwide at first, and internationally now.

At Friendship Place, the approach now informs everything we do, and we're also basing our interventions on the rehabilitation principles found in Anthony's work and echoed by CARF, the nationwide rehabilitation-credentialing organization.

I have been a believer in the model since I discovered it at Alternatives, Inc. This Massachusetts non-profit was a field application site for Anthony in the '80s. The team engaged adults both in mental health recovery and with developmental challenges.

Watching the training tapes, I knew right away the model worked.

Like psychiatric rehabilitation, Housing First is person-centered and empowering. It builds on strengths and lets the person drive the rebuilding process, as it should. People can pick the service provider they want and the neighborhood they want to settle in. The notion of choice is key here. The person can actually change providers and remain in place or graduate from services and keep the apartment.

This is welcomed flexibility for somebody who has had very few options up to the time they get into housing.

The way we set it up at Friendship Place also encourages people to select their own medical providers in the neighborhoods they move to. We like to give folks the freedom to choose. It's empowering and does not foster dependency on the service organization: the person is not encouraged to see our doctors. Rather, they pick their own, the way you and I do when we move to a new city or neighborhood.

This model sends the right message to the participant. Namely, that the system knows he or she has the right and the ability to make personal decisions. And, as is often the case with good models, it is also less costly to operate because the organization does not have to pay out-of-pocket for services that already exist somewhere else.

This is the way rehabilitation should work: with effective, person-centered practices that are also cost-effective.

We have implemented Housing First in all our rapid solutions programming. This is programming that can help a person or family rebuild their lives through prevention, rehousing and job placement in an average of three months. Starting with job placement and VA's Supportive Services for Veteran Families Program, we've moved into finding market housing for persons with Social Security and very low wages and, more recently, targeted assistance to young people age 17 to 29.

As a result of these successful initiatives, we've been invited to present our work in these areas at a number of conferences and events and to train local service providers in our models.

It's really amazing where embracing a new model can take you!

Perhaps the best thing that happened when we embraced Housing First was that we removed the "moral" judgment on housing. It went somewhat like this. You tell us you're drinking or using drugs so you stay out on the street. And, we're not sure what will happen to you there.

Housing First allows us to say: "Come as you are. We value you as a human being."

Since 2008, our annual retention rate has been between 95 and 98%. These are very reassuring figures for a program designed to keep vulnerable people housed while they connect with the services they need.