Of the 50 most populated cities in the United States, New York remains the city where it's better to rent than buy. The Big Apple's competition? Fort Worth, Texas.

That's according to the recently released Q2 2011 Rent vs. Buy Index by Trulia, an online real estate resource. The site compares rent of a two-bedroom apartment with median list price of a home to create price-to-rent ratio. Using that ratio, they divide cities into three groups: (1) cities where it is beneficial to buy a home; (2) cities where the choice should be made on a case-by-case basis; and (3) places where renting is much less expensive.

According to Trulia's release, buying a home has become more affordable than renting an apartment in 80 percent of major cities. Besides New York and Fort Worth, only in Kansas city is renting the preferable option. Right behind those cities are Memphis, Los Angeles and San Francisco,.

On the other end of the spectrum, the majority of cities where buying makes sense are located in the Western United States. Las Vegas comes out atop the buy-here rankings, followed, in order, by Phoenix, Arlington, Miami and Mesa (Ariz).

Taken by itself, the price-to-rent ratio doesn't completely explain why a high-rent, foreclosure-addled city like Miami lands in the buy-here sector, while a city with low rents like Fort Worth is the second most friendly rentable city. As always, caveat rentor.

Below is the graphic visualizing the rent-to-buy ratios of fifty metropolitan cities: 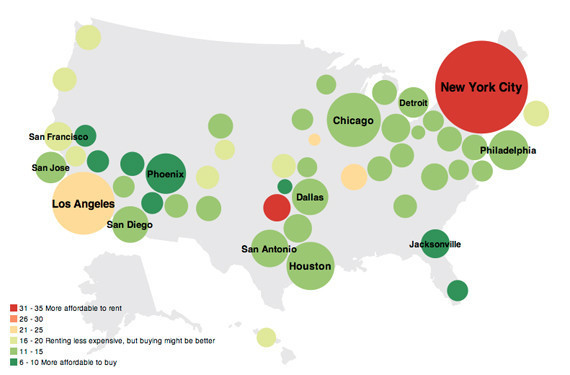